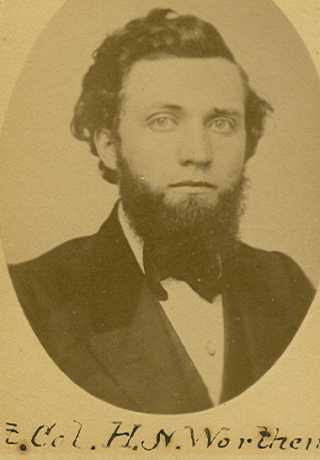 He fitted for college at Thetford Academy, and entered the University in 1854 from Post Mills, Vt., and graduated B. S. in 1857, being adjutant in his senior year. He studied law with C. W. Clarke of Chelsea, Vt., from 1857-'60; was admitted to the bar January, 1861. He then moved to Bradford, Vt., and formed a law partnership with A. W. Dickey and practised law until April 26, 1861, when he was commissioned major 1st Vt. Vols., and served until August 15, 1861, when the regiment was mustered out, and on that day was commissioned lieutenant-colonel 4th Vt. Vols. This regiment became a part of the famous "Vermont Brigade," which was officered largely by "N. U." cadets. He served with his regiment with marked ability, and was forced to resign his commission July 17, 1862, owing to failing health, brought on by exposure in the field. He took part in McClellan's Peninsula campaign. He then returned to Vermont and resumed his law practice until the fall of 1867, when he went to Boston, Mass., and established the firm of Grant, Worthen & Rankin, manufacturers of "jack heads" for weaving machines. In the latter part of the eighties he was engaged in wholesale grain business in the West. In 1886 he entered the employ of the Western Publishing Co. of Chicago, Ill., and remained in their service until June 18, 1891, when he suffered a shock of paralysis, and has since been an invalid.

He moved to Hanover, N. H., January, 1892, where he now resides. He is a member of the Masonic and Α Σ Η Fraternities.

He married Helen Marie Chase of Lebanon, N. H., September 30, 1860. They have two sons who reside in California.