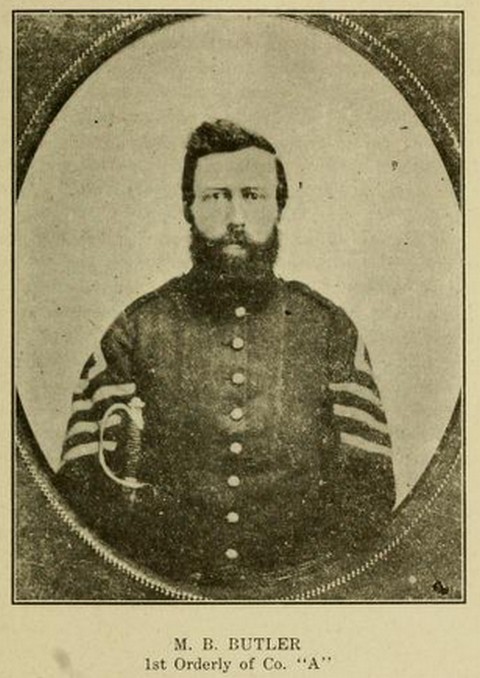 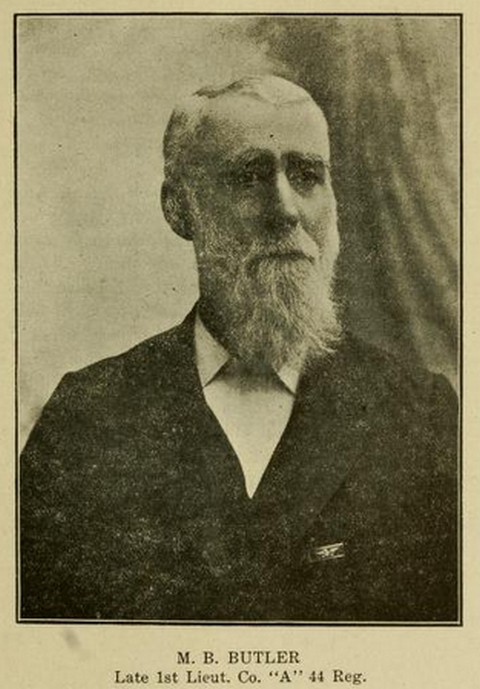 Was born in Grandisle, Vermont, Feb. 15, 1834. He was one of the five children of Daniel and Mary Butler. His father and two brothers, Jesse and Loren, and their families came fro Vermont and settled in Salem township, Steuben, county, Indiana, on the farm now owned by John B. Parcell, when the deceased was four years old. He acquired his education in the Salem and Orland schools, and taught school for several years.
Mr. Butler enlisted at Salem Center, in August, 1861, in Co. A., 44th Ind. Vol. infantry, and was assigned to Crittenden's command and promoted to first lieutenant, and took part in the battles of Fort Donaldson, Perryville, Stone River and many other skirmishes during the Buell campaign. From exposure at Fort Donaldson, his health failed and he was furloughed home, sick with typhoid fever, and remained until recovered, when he returned to his regiment at Battle Creek, Tenn., and suffered a relapse later of typhoid-pneumonia, and was nursed back to health by his brother Henry at the Spence hospital in Murfreesboro, Tenn., where he was honorably discharged from service May 2, 1863.
Mr. Butler served the people of Steuben county faithfully and well for eight years as recorder, four years as auditor and a term in the legislature, and in all of his public life was courteous and conscientious in the discharge of his official duties.
He was united in marriage at Angola, Ind., March 24, 1864, to Miss Harriet Fuller. To this union were born three sons, Albert, Benjamin and Harry. Albert died in infancy, and Harry Jan. 3, 1899. His entire life with the exception of a few years was spent in Salem township. His wife died at their home in Salem Center, Jan. 2, 1901. Religiously he was a Presbyterian, from early manhood a member of the North Salem church, and his life has been a living example of the faith he professed. In his death the son loses a loving, indulgent father, the community a sturdy pioneer an an exemplary citizen, and the church a strong and faithful pillar.
Duing the last four years of his life he compiled a book entitled, "My Story of the Civil War and Under-Ground Rail Road," which is now being published. He had been in failing health for several months, and it was his wish to be taken to the Soldiers' Home hospital at Marion Ind., for treatment, where he died June 17, 1914, aged 80 years, 4 months and 2 days. He leaves to mourn his departure one sister, Mrs. Susan Bell, one son, three grandchildren and a wide circle of relatives and friends.
Funeral services were held at the M. E. church in Salem, Sunday, June 21, 1914, Rev. John Humfreys, of Angola, officiating, assisted by Rev. E. C. Mason, of Huntington.
The above obituary is copies from the Angola Republican of July 1, 1914.