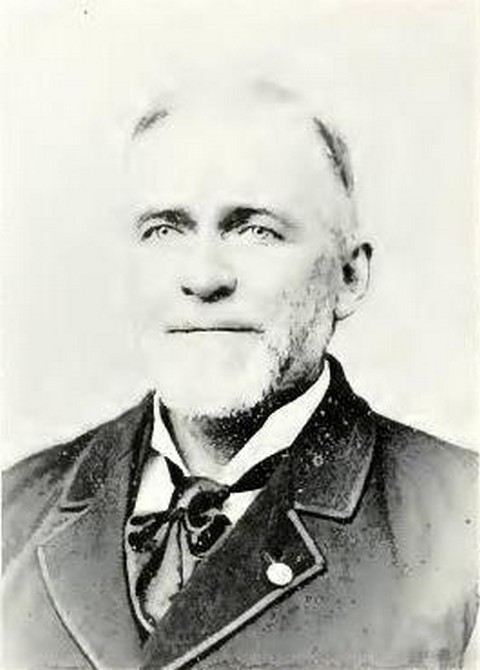 Fourth Sergeant Oscar W. Baldwin was born June 5, 1S40, in Jamaica, Vt. When ten years of age his parents moved to Chester, Vt. Young Baldwin entered Kimball Union Academy, Meriden, N. H., September, 1801, with the intention of fitting for college. While a student there he enlisted September 10, 1862; joined the Sixteenth and was with it in all its service. He was appointed forth sergeant in Company A, and served in that capacity until mustered out. He was a faithful and brave soldier, perfectly reliable in every position assigned him.

After his return he resumed, for a while his studies, but found that his health had been too much shattered to enter successfully at that time upon a professional course of study. He has been engaged in a profitable mercantile business for about twenty-five years. He is at present chairman of the board of selectmen in Lebanon.

He has been for many years a devoted worker in the Grand Army of the Republic and was chairman of the building committee of our regiment, through whose labors the Sixteenth now has free from debt their beautifully located and commodious regimental home at the "Weirs," New Hampshire. In acknowledgment of his services he was presented by his comrades, at one of their annual gatherings, a solid ebony, gold headed cane.

SKETCH OF ORIGIN OF THE ASSOCIATION AND OF THE
CONSTRUCTION OF THE HEADQUARTERS BUILDING
OF THE SIXTEENTH REGIMENT AT THE WEIRS.

Built upon a large granite boulder, near the shore of Lake Winnipesaukee, at The Weirs, N. IL, the Sixteenth Regiment New Hampshire Volunteers Association was organized in August, 1878. Captain Elias F. Smith, of Company A, was elected President, and was re-elected annually until 1882, when he declined a re-election. We pitched our tents, 1880-81, near where the Hotel Weirs stand. During the year 1881 the State procured the construction of several barracks for use of the State Association, and the Sixteenth Regiment Association was assigned quarters in No. -2, where meetings were held annually until our cottage was ready for occupancy in 1887. Captain Aaron A. Blaik, of Company C, was elected President at the 1882 encampment and served two years. Sergeant Oscar W. Baldwin, of Company A, was elected President in 1884 and served until 1800. There had been efforts made at the 188() meeting, to raise by personal subscriptions sufficient money to pay for the construction of a cottage as a home for the association when an expression of views was called for by the President of the association.

Henry L. Johnson the present President being called upon responded that "substantial means were more necessary than talk." He placed a substantial contribution in the hands of the President, and was followed in this by others, so that in a few moments the association had about $5oo in money and pledges. It was voted that Comrades Oscar W. Baldwin, George E. Crowell and Albert A.V. Wiggin be appointed a committee with full power to solicit contributions, make collections, and contract for the construction of a cottage, the selection of plans being left to their good judgment. The work was begun on the Association Home in the fall of 1880 and the building was dedicated at our August, 1887, encampment, Captain John L. Rice, of Company I, delivering the formal address. We were honored at our 1887 encampment by a visit from General John C. Fremont and other distinguished alumni of military fame.

SERVICE: Duty at Carrollton and in the Defences of New Orleans, La., till April, 1863. Operations on Bayou Plaquemine and the Black and Atchafalaya Rivers February 12-28. Operations against Port Hudson, La., March 7-27. Fort Burton, Butte a la Rose, April 19. At Fort Burton till May 30. Ordered to Port Hudson May 30, and assigned as guard at arsenal of Banks' Army at Springfield Landing June 3 to July 9. Surrender of Port Hudson July 9. Occupation of works till August 1. Moved to Concord, N. H., August 1-14. Mustered out August 20, 1863.