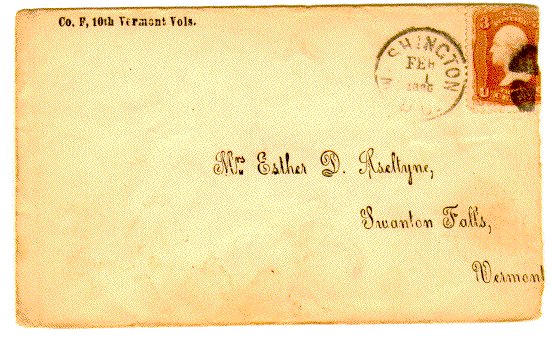 In late January 1865, a young Vermont non-commissioned officer, Corporal Alanson M. Aseltyne, penned a letter to his wife, Esther D. Aseltyne of Swanton Falls, Vermont. Stationed in the trenches around besieged Petersburg, Aseltyne took advantage of a lull between battles to write his letter. After finishing his message, he inserted it into a pretty Regimental Patriotic envelope with a printed address.

The cover is unusual for two reasons. First, it was printed with both a return address (Co. F, 10th Vermont Infantry) and his wife's name and home address. Second, it was posted at Washington, DC, not at Old Point Comfort, Virginia. I'm not sure why this was done. Old Point Comfort was much closer than the US Capitol. Furthermore, a military courier had to travel through Northern Virginia and dodge CSA guerillas led by Col. Mosby, a risky operation.

Alanson was mustered into the 10th Vermont on the same day as his brother John and his cousin Merritt, September 1, 1862. Only Alanson was destined to survive the war and return safely to his family. Cousin Merritt was mortally wounded in action (MWIA) in the first battle the 10th Vermont participated (action at Orange Grove, Virginia, November 27, 1863). Merritt lingered for a month before dying two days after Christmas. Brother John was killed in action at Cedar Creek, Virginia, October 19, 1864.

John M. Aseltyne, another resident of Swanton, actually enlisted 3 days earlier than Alanson, on August 16, 1862. Like his brother, John was mustered in the Co. F, 10th Vermont on September 1, 1862, as a private. Again, like Alanson, he was promoted to corporal on the same day: Jan. 1, 1864. Unlike his more fortunate brother, John was killed in action at Cedar Creek, Va., on October 19, 1864.

Of the three relatives, cousin Merritt B. Aseltyne enlisted first, on August 15, 1862, while a resident of Swanton. As was the case for the two brothers, Merritt was mustered in Co. F, 10th Vermont on September 1, 1862, as a private. Regrettably, Merritt was also the first to die, falling MWIA at Locust or Orange Grove, Nov. 27, 1863. He died of complications arising from wounds on December 27, 1863.

1. The Revised Roster of Vermont Volunteers in the War of the Rebellion (reprint) Newport, VT: Civil War Enterprises

Alanson M. Aseltine died at his home in West Derby September 2, of kidney and liver trouble. The funeral was held on Friday and the body was brought to the cemetery here for burial by the side of his first wife, who died in 1891. The services at the grave were conducted by Chaplain M.W. Farnam and the choir sang ōAll the Way My Saviour Leads Me.ö The body was accompanied here by the widow, the two sons, Albert and Azro of Enosburg Falls with their wives and a daughter and a son, George Goddard and Homer Goodrich of New Hampshire, and by four veterans who acted as bearers and Mr. Green, the undertaker. There were present also a number of relatives and old friends of the deceased who resided here and at Troy. The funeral party stopped to lunch with Mrs. W.S. Trumpass, who was a niece of the deceased. Mr. Aseltine was a native of Swanton and born years ago. He was a veteran of the Civil war. He came to Westfield with his family in the early seventies. After the death of his wife, which occurred in 1891, he moved to West Derby. His first wife was Esther Traver, and his second wife, who survives him, was the sister of the late Presiding Elder Truax. For years he was the efficient janitor of the Methodist church here. He was a strong man physically and performed much hard labor. He was a kind hearted man and a good friend.