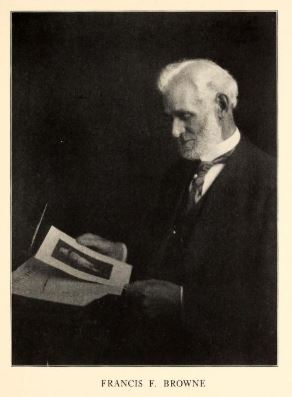 The May number of the Bookman contains the following under the heading "Chronicle and Comment" in regard to a native of this town: "The present month marks the 20th anniversary of The Dial, which was founded in 1880 by Francis Fisher Browne, whose photograph we herewith present. Mr. Browne was born in South Halifax, Vt., Dec. 7, 1843. As a boy he learned the printer's trade in his father's newspaper office at Chicopee, Mass. In 1862 he left school to enlist in a Massachusetts regiment, serving for one year in North Carolina and in the Army of the Potomac. After the regiment was discharged he went to Rochester and began the study of law, entering the law department of the University of Michigan in 1866. He soon gave up the idea of the law as a profession, and turned to journalism and literary work. From 1869 to 1874 he was editor of the Lakeside Monthly, then he became literary editor of the Alliance. Mr. Browne is the author of The Everyday Life of Abraham Lincoln and a small volume of poems, Volunteer Grain. He has edited and compiled several volumes of standard verse. At the World's Fair in Chicago he was chairman of the committee on the congress of authors."

Webmaster's noter: Photograph from 2nd edition of "The Everyday Life of Abraham Lincoln," which Browne completed in April 1913, less than a month before his death. See link above.

Another photograph of Browne, with John Muir and other early members of The Sierra Club can be found on their site, and - Muir's Memorial Tribute to him as well.

See also this page for several other photos of Browne, including one with Teddy Roosevelt, who was also a friend of John Muir.