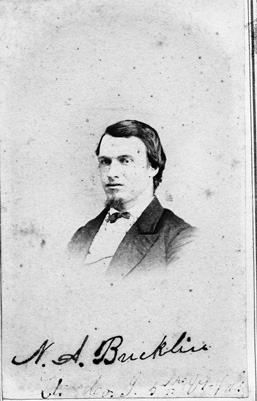 Nathaniel A. Bucklin Dies in Sudbury, 80

Had Been Town Clerk for 39 Years; Postmaster and Merchant for 35.

Brandon, Jan. 19. - Nathaniel A. Bucklin died at his home in Sudbury this morning at 1:30 o'clock, having been ill for a long time with rheumatism and complications. He had held various town offices, had been postmaster and for 15 years was in the mercantile business.

The funeral will be held at the house Sunday afternoon at 2 o'clock, the burial being in Sudbury, North cemetery.

Mr. Bucklin was born at Sudbury July 5, 1842, being one of eight children of Nathaniel and Laura (Bourne) Bucklin. On February 3, 1865, he married Sarah Jane Selleck of Shrewsbury. He is survived by four sons and one daughter, Charles E. Bucklin of Pratt, Kan., Dr. G. F. Bucklin of Sawyer, Kan., Herbert K., John G. And Adeline Bucklin of Sudbury.

In 1873 he purchased the place known as the Willard Pitts hotel in Sudbury, which contained a tavern, postoffice and store. He had been town clerk and treasurer for 36 years, postmaster and merchant for 35 years and had also held various other offices. In 1878 he represented Sudbury in the Legislature.

At the outbreak of the Civil war, Mr. Bucklin was one of the first to enlist from Sudbury, going out in Company G, First Vermont regiment, on May 2, 1861, from Brandon. He was mustered out on August 15, 1861, and he re-enlisted in Company 2, Fifth Vermont regiment, on September 4, 1861. He was mustered out again on December 15, 1862, and re-enlisted the second tie the same date. He finally mustered out of the service on June 29, 1865, at Burlington, with the rank of quartermaster sergeant.