One thing can be said about James W. Kimball - a moving object gathers no moss! It appeared that James, by chance or by choice, had a great deal of wander lust in his system. Unlike most Vermont farm boys of his era, James managed to see this country from coast to coast.

Born to James and Sarah Kimball in Brandon, Vermont on the first of January, 1833, he started life out simple enough. [1] He belonged to a farming family and he stayed tied to the land for quite some time. But, by the time he was twenty-seven, his desire to be somewhere else had manifested itself. According to the 1860 Federal Census for Edna Precinct, Jackson, Oregon (near Phoenix, Oregon) he was a farm laborer living with a family called Low (Saml, Eliza, John and Lucinda). [2] The unanswered question is, what brought him three thousand miles from home?

It didn't appear to have been lack of prospects back home as it appeared James was an only child. So he would have inherited any property of his parents. Perhaps the young man was disinterested in carrying on the agrarian tradition of his family. Maybe he wanted to see more of the world than he could from the windows of his Vermont farmhouse. If it wasn't the allure of something new and different that attracted him, maybe it was the possibility of becoming very rich. After all, it was in the early 1860's that gold and silver was being discovered all over what is now Oregon, California, Idaho, Nevada and Montana; the area that was, in 1860, known as the Washington and Oregon Territories of the Pacific Northwest. However, there seemed to be enough of the frugal, pragmatic Puritan in James to keep him grounded to a certain sense of reality. Shelter and food are two of the basic necessities for life after all, and I'm sure James appreciated eating on a regular basis and having a roof over his head at night. Since farming was the only trade he knew, it made sense that he would pick that up as a way of providing for himself in Oregon. Or maybe just for the fun of it he joined the thousands of emigrants streaming west over the Oregon Trail leading to "free" land for the taking west of the Mississippi. Well, it was almost free. First it had to be wrestled away from the original inhabitants, the Native Americans. That process in and of itself provided an adventure for a daring young men willing to put on a uniform, especially to someone like James who was used to small, familiar New England villages with their gently rolling green hills where the greatest excitement was the Fourth of July social held once a year. Nothing in the historical documents I've consulted so far gives the least bit of a hint as to why James would seek a drastic change in his residence. But, the fact is, there he was in Oregon when he decided to mount his horse and enlist in the First Oregon Calvary as a Union volunteer.

The Civil War commenced in the Spring of 1861 in South Carolina. That major conflict interrupted another lesser known one that had been going on in the Pacific Northwest for some years prior. In comparison, the war in the East dwarfed the Indian wars in the Northwest. However, the blood-shed was no less real, even if in minor quantities. Homesteaders, trappers and miners flocked to and passed through this area that for hundreds of years had been the exclusive domain of the American Natives. They considered it their sacred land and the European "white eyes" as interlopers, if not as thieves. Violence caused by these different priorities was inevitable. The only peace-keeping force in the territories was the Army. But the few regular Federal troops that were stationed in the Northwest were called back East after April 12, 1861. That left a void in the Europeans' protective bubble. To safeguard the miners and patrol the routes of immigration, volunteers were sought after. James became one of them.

He was living near Phoenix, Oregon when he sought out a recruiter. On enlistment, the twenty-eight year old farm worker was described as standing five feet ten inches tall with gray eyes and black hair. He joined the First Oregon Calvary, Company A on November 25, 1861 for three years. [3] He provided his own horse and horse equipment for which the Government would reimburse him at the rate of 40 cents a day. They allotted him $150 for his horse and $35 for the horse equipment. [4]

It was only two days later, November 27, that James was mustered-in at Fort Baker, California on the shores of San Francisco Bay. [5] Fort Baker was named after Colonel Edward Baker who was killed at the Battle of Ball's Bluff early in the war. It was formerly known as Lime Point Military Reservation before it was renamed. This fort, along with numerous others, were part of the coastal defenses on the West Coast and was used mostly as a supply depot. [6] These forts were established to protect the ports along the coast, especially San Francisco Bay which was the major shipping port for the gold and silver mined in the Oregon and Idaho Territories. [7] 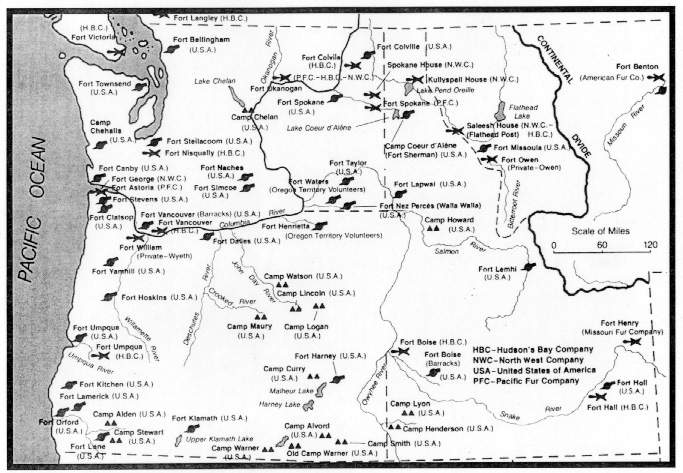 As conflicts between whites and Indians escalated and became more frequent and intense, there was a greater need for a larger military presence. The initial members of the First Oregon (Companies A-F) were organized and mustered-in at various places in Oregon and California late in the Fall of 1861. In May of 1862, they were sent into the Washington Territory to the Walla Walla area to patrol along the Salmon River. The First Oregon was subsequently ordered on various expeditions over the next several years against the troublesome Snake Indians, among others. Seldom was the Regiment completely intact as a single unit as companies, and even individuals, were detached for special assignment throughout the Pacific Northwest. [8]

In fact, much of James' Company A was organized at or near Oregon City in 1862. It was quickly moved to Fort Dalles and then to Fort Walla Walla in the Washington Territory around June-July, 1862. On July 25, 1862, it left for Salmon Falls on the Snake River Expedition against the Snake Indians in what is now Idaho, but was at that time called the Idaho Territory. The Regiment stayed out there until November, 1862 when it went back to Fort Dalles. In April of 1863, it was again ordered to Fort Walla Walla on another expedition against the Snakes from May to October of 1863. Another foray against the Indians occurred in February, 1864. A detachment from Fort Boise was sent to Salmon Falls again where there were skirmishes from August to October, 1864. Until the summer of 1865, the First Oregon skirmished with the Indians throughout the Oregon and Idaho Territories. [9]

James' service record did not exactly follow the same chronology of time and place as his Company's. As already noted, he was mustered-in at Fort Baker, near San Francisco in California on November 27, 1861. On December 31, 1861 he was reported as present at that post. [10] His service records for Jan/Feb, 1862 through Nov/Dec, 1862 declared him present (presumably at Fort Baker because his records did not indicate any change of station). [11] The company muster roll for Jan/Feb, 1863 stated he was present (still at Fort Baker). [12] In the March/Apr return for 1863, James is noted as being absent "...on detached service". [13] It did not reveal where he went, when exactly or why. A "Special Muster Roll" dated April 15, 1863 said that Private James W. Kimball, Co A, 1 Reg't Oregon Calvary was present, period! [14] There is no return for May/June, 1863. The next one found was for July/Aug and it declared that James was absent but failed to mention from where or why. It did say, however, under "remarks", that he was "...on detached service per GO No 34 WT (Washington Territory) District Oregon April 14, 1863". [15]

James was now thirty-one years old and a long way from his native Vermont. Apparently, he had had enough of adventure in the wild west and returned to the rolling green hills of Vermont. Three years after his discharge from the Oregon Calvary, James married a girl from Leicester. The ceremony took place in Brandon on December 26, 1867. [21] The bride was Rosanna Rena Hitchcock. In 1874, James and Rena had a daughter named Daisey. When the 1880 Federal Census was taken, James was a "day laborer" living in Brandon, Vermont with his thirty-six year old wife and six year old daughter. [22] Within five years (1885) Rena was gone and Daisy disappeared from the public records. [23] By 1900, James, widowed and apparently alone, was a boarder with the Eayres in Pittsford, Vermont. [24] At sixty-seven, he didn't seem to have employment of any kind. James had, back in April of 1882, applied for and been granted, a pension by the Government which he probably was living on. [25] Death came to James W. Kimball on January 23, 1903. He passed away from tubercular. At the time of his death, he was living in the Soldiers' Home in Bennington, Vermont. [26]