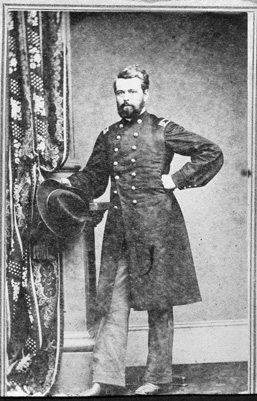 GATES B. BULLARD, M. D.
Late of St. Johnsbury, Vt.
The subject of this sketch was born in New Hampshire, and received considerable of his education in the same state, like many others located outside, and was in the service of a Vermont regiment during the war. Gates B. Bullard, M. D., was born in Plainfield, N. H., February 1, 1829, and was the son of Jonathan and Rebecca (Gates) Bullard, a grandson of Ebenezer Bullard. He received his preliminary education in the common schools of Plainfield, and afterwards attended academies at Craftsbury, Brownington, and Newbury, Vt. He commenced his professional education in Newbury, Vt., in 1851, under the direction of Dr. E. V. Watkins; this was continued under the direction of Professors Peaslee and Dixi Crosby, at Hanover; he attended medical lectures at Woodstock Medical College and the Medical Department of Dartmouth College, taking three full courses of lectures, and was graduated M. D. from Dartmouth in the class of 1855. He located first in the practice of medicine at Canaan, Vt., late in the fall after his graduation in November. He remained there three and one-half years, when he removed to East St. Johnsbury, where he was located when the War of the Rebellion broke out in 1861.
He was appointed assistant surgeon of the Fifteenth Vermont Volunteers, of which the late Prof. Carlton P. Frost of Hanover was surgeon. On the resignation of Surgeon Frost in May 1863, Dr. Bullard was appointed surgeon, and remained with the regiment until it was mustered out in August 1863.
His service in the army was with the Second Vermont Brigade, under Generals Stoughton and Stanard. On being mustered out of the service he returned to St. Johnsbury, where he died September 4, 1901.
He has been president of the White Mountain Medical Society of New Hampshire, of the State Medical Society of Vermont, and was a member of the American Medical Association. He read several papers before these societies which have been published. He was representative of the town of St. Johnsbury in 1863 and 1864; senator from Caledonia county, 1867-'68; health officer of the town of St. Johnsbury from 1894 to 1897.
Dr. Bullard was a member of the fraternal associations of Odd Fellows, Masons, and Grand Army. He was a general practitioner and frequently took winter vacations, attending post-graduate courses in New York.
Married, Lefie P. Wheeler, in 1860.
Children, three: Harry, Rebecca, and Agnes Bullard.

St. Johnsbury, Vt., Sept. 4 - Dr. Gates B. Bullard, known as one of the most skillful physicians in Northern New England, a medical authority of high standing, died at his home here today, aged seventy-two years. He was surgeon of the Fifteenth Vermont Regiment in the civil war and later surgeon general of Vermont. He had served in both branches of the legislature and as a commissioner for the insane.