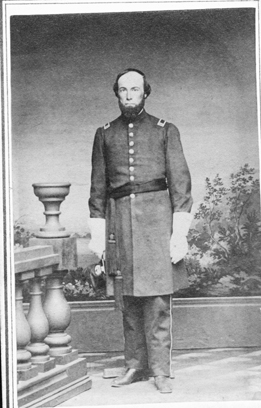 Dr. Arthur Franklin Burdick, who died at his home in Underhill, February 23, was born in Underhill October 24, 1828, the son of Timothy and Sylvia Lewis Burdick. His early life was spent on his father's farm, but when 16 years of age he became the apprentice of one Luther Macomber, a carpenter in Jericho, with whom he continued year as such and then became his partner. At this time the excitement over the newly discovered gold fields in California was at its height and young Burdick could not dispossess his mind of the idea that he too, should seek his fortune there. He was an original forty-niner. After an exciting and dangerous voyage in a sailing vessel around Cape Horn, he with 261 others reached their destination after 130 days from Boston. He was joined by his partner later on. He built the first wooden house in Sonora City. He returned to Vermont in 1852 and with what was then considered ample means entered Green Mountain Academy at Underhill Center under the tuition of the late Joseph Cilley. After three years he began the study of medicine with Prof. Samuel W. Thayer of Burlington and graduated from the medical department of the University of Vermont in 1858. He afterwards took post graduate courses in New York and received diplomas from the College of Physicians and Surgeons and Bellevue Hospital Medical College. Dr. Burdick entered the U.S. service during the War of the Rebellion as a surgeon of the 5th Vermont Infantry and was one of the operating surgeons at the battles of Fredericksburg and Chancellorsville. He was twice married. His first wife, Mary Woodworth Burdick, died in 1903, leaving one daughter, an only child, now Mrs. E.G. Schweig, who survives him. His second wife, Mary Burdick, died in 1906 without issue. Dr. Burdick by close attention to his profession and frugal habits accumulated sufficient competence to enable him to spend his declining years in comfort and contentment. His charity was quietly but freely distributed and he found "in the giving of the given the hidden recompense." The two church organizations at Underhill Flats, some time ago, each received a substantial fund, the income from which is to support preaching services in perpetuo. His own church affiliations were with the Congregational organization. He received the first three degrees in Masonry in McDonough Lodge No. 26, F. and A.M., in 1858 and he was the oldest member of that body and among the very few in the state who have retained their membership and have been more or less active in the fraternity. He was the oldest physician in Chittenden county, but had not done active service for 25 years. He was also a charter member of L.H. Bostwick Post No. 69, G.A.R. of which organization he was chaplain for several years and which now has only six living members out of a complete membership of nearly or quite one hundred of the Boys of '61. A good man has gone. While many of his old friends and comrades have preceded him yet a large number now remain to mourn the loss of a devoted friend, a loyal comrade and a consistent Christian. Funeral services will be held this afternoon, with Masonic honors.

Masonic Honors Are Given at Burial of Dr. A.F. Burdick

UNDERHILL, Feb. 24. – The funeral of Dr. Arthur F. Burdick, oldest physician in Chittenden county, was held yesterday afternoon at two o'clock at his late residence, and was attended by a large gathering. Scripture was read by the Rev., John Robinson and prayer was offered by the Rev. A.H. Sturgess. The Masonic service was pronounced by Past Grand Master W. Scott Nay, who has been closely associated with Dr. Burdick for nearly 50 years. McDonough Lodge, F. and A.M., attended in a body, as did also the O.E.S. and Women's Relief Corps. There were beautiful floral tributes from the Congregational Church and society, the Masonic Lodge, the O.E.S., the Women's Relief Corps and friends in New York and Brooklyn, as well as from nearby towns. Among those present were Mrs. Charles Blakeley of St. Johnsbury, and two brothers, Bert Brigham of Newport and Pearl Brigham of Hyde Park, Mrs. H.E. Humphrey, Mr. and Mrs. Eugene M. Styles, Miss Bertha Hatch and Miss Cora Phillips of Burlington.