Douglas, Orlando Benajah, New York City, son of Amos and Almira (Balcom) Douglas, grandson of Col. Benajah Douglas, was born September 12, 1836, at Cornwall, Vt. He attended the commons schools of his town, and the seminary at Brandon, Vt.; commenced the study of medicine in 1858, in Brunswick, Mo., under John H. Blue, M.D. After studying nearly three years he entered the service of the Union army as private, afterward promoted to lieutenant and adjutant of the 18th Regiment, Missouri Volunteer Infantry; was acting assistant adjutant-general on General Bain's staff, by order of General Grant, and was twice wounded. In 1875 he resumed the study of medicine, attending one course of lectures at the Medical Department of the University of Vermont, one course at the University of the City of New York, Medical Department, and was graduated from the latter in 1877; also took a course of lectures at the New York Post-Graduate Medical School and Hospital. Dr. DOuglas began the practice of medicine in New York City, in 1877, and this has been his place of residence since that year. 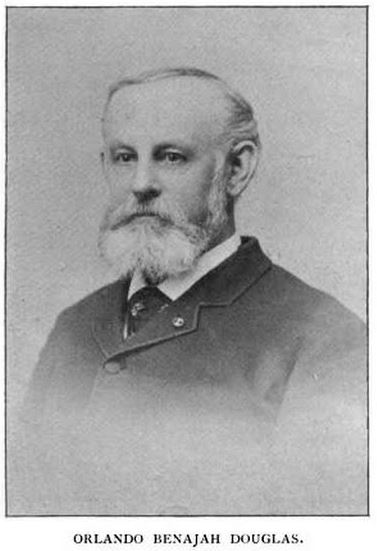 Dr. Douglas has been professor of diseases of the nose and throat in the New York Post-Graduate Medical School since 1888; connected with Manhattan Eye and Ear Hospital, throat department, since 1877, and surgeon and director of same since 1885. For two years, 1877-'79 was a visiting physician from Demilt Dispensary.