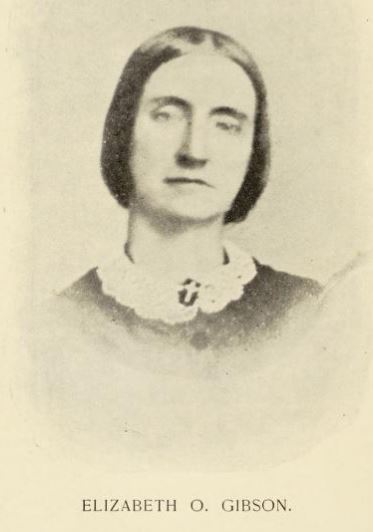 Source: Holland, Mary Gardner, "Our army nurses: interesting sketches, addresses, and photographs of nearly one hundred of the noble women who served in hospitals and on battlefields during our civil war," B. Wilkins & Co., Boston, Mass., 1895, pp. 386-388.

Elizabeth O. (Austin) Gibson was born near Vergennes, Vt., July 9, 1825 and died near Central City, Nebraska, May 6, 1904. Her last illness, acute bronchitis, was very brief, but as she was just recovering from a long siege of la grippe, she had no strength left to fight her last foe. She is survived by her only son, Wilfred D. Gibson, and his wife Emma, and son Raymond who reside on the College Section near Central City. "Mother Gibson's" loss is felt very keenly, not only by her immediate relatives, but by a large circle of friends in the Friends' Church, the Woman's Christian Temperence Union, and the Woman's Relief Corps, in all of which organizations she was an active member, loved and honored because of her holy life and good works. The funeral was held Sunday, May 8, in the Friends' Meeting House. Pastor W. M. Perry preached a comforting sermon from Job XVII; 9: "The righteous also shall hold on his way, and he that hath clean hands shall be stronger and stronger." A double quartette of young ladies and gentlemen from Nebraska Central College (of whose faculty her son is a member,) beautifully rendered appropriate music. Her son made a few remarks in regard to her public service as nurse in the Civil War; and then the W.R.C. (which organization, together with the G.A.R. attended in a body) gathered around the remains and rendered their burial service, each member depositing upon the coffin a fragrant floral tribute.

"Mother Gibson's" public service deserves more than a passing notice. At the opening of the Civil War, in 1861, she was a practicing physician in Cincinnati, O. When the call for volunteer nurses came, she at once responded, and was assigned to the Western Dept. at St. Louis, Mo. Here she served as nurse and matron in the "Sixth St. Hospital" and "Jefferson Barracks" two years. Twice during this period she went to the front - Pittsburg Landing and Vicksburg, each time bringing back a boat load of several hundred wounded soldiers. The last two years of the war she served as matron in charge of Harney Hospital, Madison, Wis. She had charge of 800 beds, and as she had taken the chemical course in college, she had the hardest kind of service in surgical wards. In fact, she went to war a strong, hearty woman of thirty-six years, and came out at forty with broken, permanently impaired health. Since the war, she las led as active a life as her health would permit. She was a member of the National Nurse's Association and its Chaplain for one year. She was Chaplain of the Wisconsin State Encampment one year, and was for fourteen years Chaplain of the W.R.C. of Eggleston Post, Appleton, Wis. Patriotism was the ruling passion of her long, eventful life. Hundreds of the soldiers whose lives she saved, will delight to honor her.