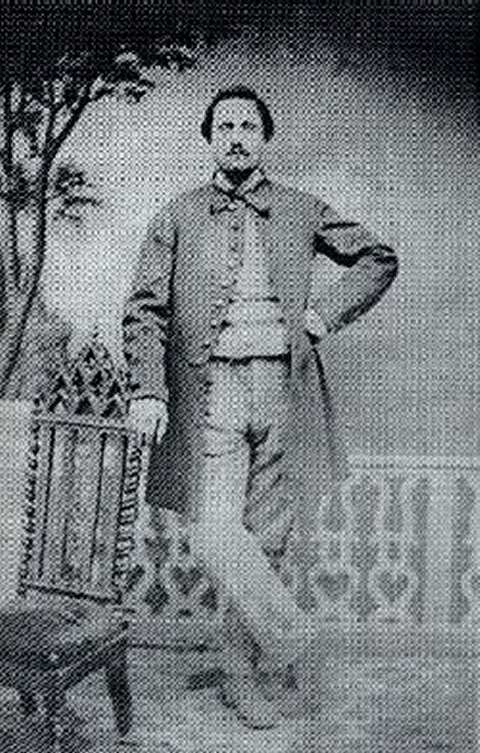 Mr. and Mrs. Davidson M. Barr, of Chester, celebrated their fiftieth wedding anniversary Wednesday at their home in the presence of 150 or more people, including all their children, grand-children, and great-grandchildren, and many relatives.

Mr. Barr was born in Stockbridge March 13, 1835, of sturdy Scotch ancestors and was the youngest of five children born to Mr. and Mrs. Joseph and Luna (Bennett) Barr.

Mrs. Barr was born in Cavendish March 10, 1838, and was one of seven children of Mr. and Mrs. Sylvanus Norton, and one brother is living, Elwood P. Norton, of Springfield.

Mr. and Mrs. Barr have resided in Chester over thirty years. They have five children, Mrs. William Duncan of Southboro, Mass., Sidney L. Barr, of Bridgewater, Mass., Mrs. F. L. Brown and Mrs. A. A. Pinney, of Andover, and Mrs. E. L lane, of Burlington.

Mr. and Mrs. Barr are enjoying good health and to a newspaper reporter Mr. Barr says: "I make my boasts that I am well and never lost a meal of victuals if I could get it. I am a farmer and always have been. On July 23, 1862, I enlisted in Company H, Eleventh Vermonth (sic) Volunteers, and served until the close of the war, taking active part in all the battles that the regiment was engaged in, my captain being J. E. Eldredge, of Randolph, past department commander. On June 23, 1864, I was taken prisoner in the Weldon railroad skirmish, and for eleven months suffered the horrors of Libby, Belle Isle, and Andersonville prisons. When I was captured I weighed 225 pounds, and when discharged I was reduced to about 100 pounds. I was formerly commander of Sheridan post at Weston, and am now a member of Henry Post of Chester."

Mr. and Mrs. Barr received many valuable gifts, including a generous amount of money. After photographs of the company had been taken, Miss Ruth Sawyer, school teacher in the Barr district, gave an historical reading and also read a poem. Hugh Henry, in behalf of the company, presented Mr. and Mrs. Barr with a purse of money to which the recipient responded with much feeling. Harvey A. Bond, a comrade of Mr. Barr during the war, was also a speaker.

Among the relatives present from out of town, were Mr. and Mrs. Oren Bates, of Sherburne, Eugene Barr, and Mrs. William Colledge, of Mount Holly, Mrs. C. H. Walker, of Rutland, and Mrs. Augusta Bates, of Plymouth.

An interesting incident of the occasion was the presence of James A. Pollard, of Chester, for whom Mr. Barr worked when a young man, and who administered to him the freeman's oath. Mr. Barr is a Republican in politics.

On this 15th day of August, A.D. one thousand eight hundred and sixty-five personally appeared before me Judge of the Probate Court within and for the county district and State aforesaid Davidson M. Barr aged 30 years, a resident of Weathersfield in the State of Vermont, who being duly sworn according to law, declares that he is the identical Davidson M. Barr, who enlisted in the service of the United States to the credit of the town of Sherburne, Vt., on the 24th day of July in the year 1862, as a Sergeant in Company H, commanded by Capt. James D. Rich in the 11th Regiment of Vermont Volunteers, in the war of 1861, and was honorably discharged on the 23rd day of May, in the year 1865; that while in the service aforesaid, and in the line of his duty, he was disabled as follows, to wit: He was taken prisoner at the battle fought near the Weldon Rail Road, Va. on the 23rd day of June, 1864, and was taken to the Rebel Prison at Andersonville, Ga., reaching that prison on or about July 12, 1864. Everything was taken away from him by the rebel officers, except one shirt, one blouse, one pair pants, cap & shoes. Had no blanket - or tent - while in said prison and had no shelter there of any kind there - remained a prisoner at Andersonville until about the 18th of April, 1865, when on the cessation of hostilities he was released. From the poor and scanty food furnished him and from exposure to the inclemencies of the weather, he contracted the scurvy. chronic diarrhea, inflammatory rheumatism and many other disorders - and is now in very poor health and wholly incapacitated from earning his subsistence by manual labor. Was discharged by reason of Gen. Order No. 77, A.G.O. 1865.

I hereby appoint Gilbert A. Davis of Felchville, in the County of Windsor and State of Vermont, my Attorney to prosecute my claim for pension, a receive a certificate when issued thereon.

Also personally appeared Lucian Phillips of Claremont, N.H., and Roswell Downer resident of Weathersfield, Vt: persons whom I certify to be respectable and entitled to credit, and who, being by me duly sworn, say that they were present and saw Davidson M. Barr sign his name, to the foregoing declaration; and they further swear that they have every reason to believe from the appearance of the applicant and their acquaintance with him, that he is the identical person he represents himself to be; and they further state that they have no interest in the prosecution of this claim.

Sworn to and subscribed before me, this 15th day of August A.D., 1865; and I hereby certify that I have no interest, direct or indirect, in the prosecution of this claim.

Witness my hand and the seal of the Probate Court for said District of Windsor at Weathersfield in said District.

Davidson M. Barr, whose decease occurred at the age of 82 years and 11 months, at 5 o'clock Tuesday afternoon, Feb. 12, at the home of his granddaughter, Mrs. D. E. Griswold, was a native of Stockbridge.

Mr. Barr enlisted in the Civil War July 23, 1862, in Company H, 11th Vermont regiment, and served until the end of the conflict. He was taken prisoner June 3, 1864, and confined at Belle Isle, Libby, and Andersonville, being held in the last named prison 11 months while suffering untold misery. He was a faithful, brave soldier, a kind neighbor and respected citizen.

He had resided in this place a number of years and in Chester 24 years. For the past six years, he had had his home in Houghtonville but spent the winters with his granddaughter, Mrs. E. B. Pinney at his former home in Chester. He was a farmer and quite extensively engaged in the poultry business.

During the last five weeks of his illness he was tenderly cared for by his granddaughter, Mrs. D. E. Griswold, who did all she could to alleviate his suffering.

Four children survive him -- Mrs. Christie Duncan of Southboro, Mass.; Sidney Barr of Lincoln, Mass.; Mrs. Emma Barnes and Mrs. May Pinney of Andover. There are 14 grandchildren and six great-grandchildren. Mrs. Duncan and Mrs. Barnes were not able to attend the burial rites on account of illness. The wife, Mrs. Ellen (Norton) Barr, passed to the higher life eight years ago. She was a self-sacrificing lady with noble characteristics and beloved by all who know her.

The funeral was conducted by Rev. Henry Crocker in the Congregational church of Chester Friday afternoon. 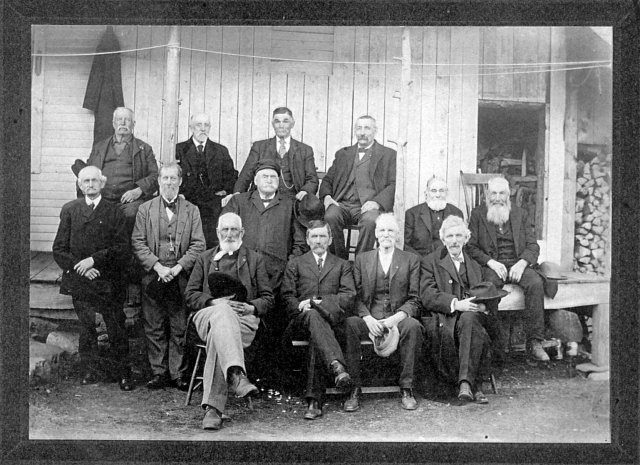 Members of Henry G.A.R. Post 27, Chester. Taken on 1 May 1907 at the home of Davidson Barr in Chester.
They were in attendance at the 50th Wedding Anniversary of Davidson and Ellen (Norton) Barr.