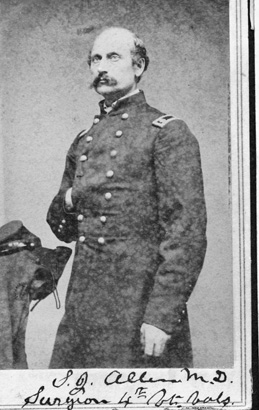 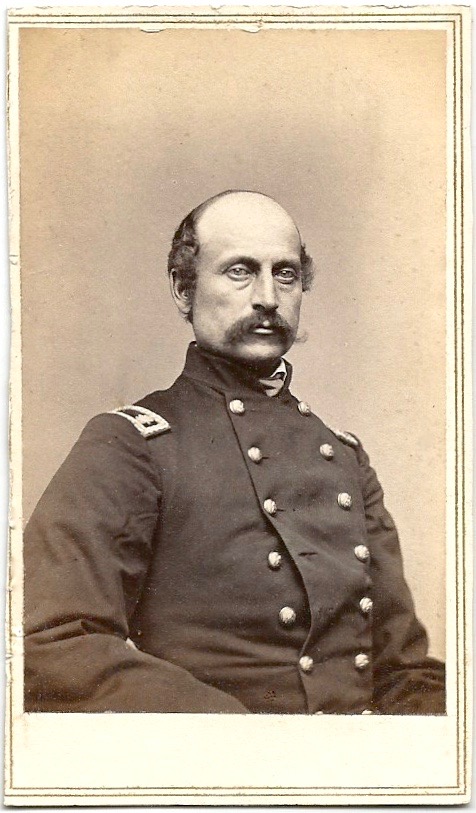 Samuel Johnson Allen, son of David and Hannah Wilcox Allen, was born January 4, 1819, in Newport, Sullivan County, New Hampshire. He was educated at Newport and Unity Academies, studied medicine in the office of Dr. J. L. Swett, and graduated from Castleton Medical College in 1842. He commenced practice at Hartford, Connecticut, but spent most of his life in Hartford, Vermont.

Dr. Allen married Mary Jane Lyman (1825-1905), daughter of Lewis and Mary Blake Bruce Lyman, June 14, 1841. Between 1855 and 1856 he was principal or superintendent of Hartford High School, White River Junction. At the outbreak of the War of Rebellion, on August 15, 1861, Dr. Allen volunteered for service and was commissioned Surgeon of the Fourth Vermont Volunteer Infantry. He served with that regiment until his three-year commitment was done, and on September 21 1864, two days after the third battle of Winchester, he departed with nine other officers and 136 enlisted men, arriving in Brattleboro on September 29th, and mustered out the next day.

After the war, Dr. Allen served as Surgeon General of Vermont. He received an honorary degree from Dartmouth College in 1870, and also served on the advisory board for the Mary Fletcher Hospital in Burlington. In 1880, Dr. Allen (age 60), his wife Mary Jane (52) and son Harry B(ruce) Allen (22), were living in Hartford, along with a sister-in-law, Anna Lyman (47). Dr. Allen's occupation was surgeon/physician, and Harry was listed as a medical student. Another son, Samuel Johson Allen Jr. (1845-1930), himself a Civil War veteran, was also a physician, and practiced in Vermont.

Dr. Allen died August 8, 1886, in Hartford, and is buried in the Hartford cemetery, the land for which he had donated to the town.

Samuel Johnson Allen, of White River Junction, died August 8, 1886. His illness was of short duration, less than a week; as on Wednesday, before his death, he was at his place as chairman of the pension examining board; but the exposure, with the fatigue, aggravated unmistakable symptoms of disease of the kidneys, that were developed some days prior, and he rapidly went down with the usual effects of uremic poisoning.

He was born at Newport, N. H., January 8, 1819, and was the eighth child of David and Hannah (Wilcox) Allen; was educated in the common schools and academy of his native place, and in 1839 commenced the study of medicine under the tutorage of Dr. John L. Swift of Newport, and subsequently continued it under the instructions of Prof. Dixi Crosby. He graduated in Vermont at Castleton Medical College in 1842, and located at Norwich, Vt. In 1844 he was married to Mary Lyman, daughter of the late Lewis Lyman, who still survives him, also three sons. January, 1844. he removed to Woodstock, Vt., where he opened a drug-store in connection with his practice. June, 1845, he removed to Hartford, Conn., where he resided, and engaged in the practice of his profession until March, 1847, when he returned to Vermont and located at White River Junction, where he has since resided. He was appointed surgeon of the 4th regiment, Vermont volunteers, July, 1861, and soon, with his regiment, marched to the front, and for twelve months remained with the regiment and diligently ministered to its needs. December 15, 1862, he was appointed surgeon of the Vermont brigade, and acceptably discharged the duties of the position for about three months, when he was appointed surgeon of the second division of the sixth army corps, a position he effectively filled until September 21, 1864, when he was honorably mustered out of service. The relief from military service was occupied by a brief visit to his home. When he returned to the army he was appointed acting staff surgeon in U. S. A., and assigned to duty as medical inspector in the sixth army corps. This office he retained to the close of the rebellion, and was finally mustered out in July, 1865. He was present at every notable engagement in which his command bore a part, from and after the first battle of Bull Run to the end of the war, with the single exception of the disaster at Balls Bluff. He was twice wounded the same day at Opequan Creek, and subsequently had several marvelous escapes from injury and death. During his army service Dr. Allen was frequently dispatched to perform difficult surgical operations in different sections of the army. On his return to civil life he resumed practice at his old field, where the ability acquired by long experience was highly appreciated. His disciplined skill was known more widely than the limits of his State. In the courts of New Hampshire, as in those of Vermont, his services as an expert were often called into requisition. He was also a valuable contributor to the science and art of medicine and surgery. As an example, he claimed to be the discoverer of the method of reducing dislocations of the hip, by raising the hips and lower part of the body by the flexed legs, and thus holding immovable the weight of the hips and opposite limb, rotating the body outward, thus producing just sufficient abduction and extension to quietly draw the head of the femur through the slit in the capsular ligament and direct it into the acetabulum. He also claimed to have devised a treatment for fractured clavicle by means of adhesive plaster strapping, giving better results than the usual methods of treatment. A full account of these methods practiced by him has been published in medical journals, and also read before the medical societies in Vermont and New Hampshire. Dr. Allen was honored with official station in all the medical societies with which he was connected. In 1878 he was president of the White Mountain Medical Society. In 1883 he was delegate from the Vermont Medical Society to the American Medical Association, met at Cleveland, Ohio. He was one of the consulting surgeons of the Mary Fletcher Hospital at Burlington, Vt., from its organization. In politics he took a lively interest, early espousing the principles of the Republican party. He was elected a member of the State Legislature in 1880, also in 1882, and was chairman of the Committee on the Insane; also chairman of the Committee on the Board of Health. In 1880 he was chosen chairman of the Supervising Board of the Insane, and so fully justified the wisdom of the selection that he was re-elected in 1882. Possessed of a large fund of medical erudition, and fortified with that better knowledge which is gained only by an observant, active practice, he has left for us a record as one devoted to his profession, and his country as well, and a name that commands the respect of his professional acquaintances, and also one that the soldiers who came under his care will not soon forget, or cease to respect; and without idle adulation it may be said that he was the peer of Vermont's medical men—a State that has given birth to not a few who have made themselves excellent and eminent practitioners of the healing science and art.

Dr. Samuel Allen died at his residence in this village Sunday evening of Bright's disease of the kidneys. Dr. Allen served as surgeon in the late war of the rebellion and was a member of Abraham Lincoln Post G. A. R., of this place, being post surgeon. His illness was of short duration only being confined to the house since last Wednesday.