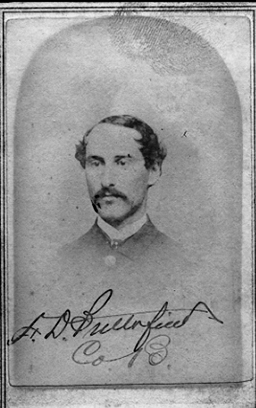 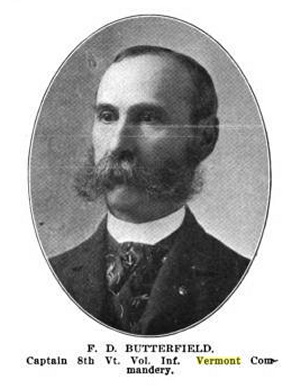 Butterfield, Frederick David, of Derby Line, son of David and Elmira Ward (Randall) Butterfield, was born in Rockingham, May 14, 1838.

He was educated at the common schools and the Saxtons River Academy. Choosing a practical business education rather than a college course, he, at the early age of sixteen entered the hardware house of A. & J. H. Wentworth of Bellows Falls. In 1859 he removed to Derby Line and became connected with the house of Foster & Cobb.

At the breaking out of the rebellion he gave up his business prospects and entered the Union army, enlisting as a private in Co. B, 8th Vt. Vols., and was successively promoted to 2d lieutenant, 1st lieutenant and captain. The original term of service for the regiment expired June 1, 1864; Col. Butterfield however remained in service some time thereafter, but after his campaigns in Louisiana and Texas, he became so utterly broken in health that an immediate return to the North was the only means of saving his life. He accordingly resigned his commission August 6, 1864. Early in 1862 he was detached from his regiment and appointed to a position in the signal corps, where he remained during the balance of his military service. In the capacity of a signal officer he was attached to the personal staff of General Godfrey Weitzel, General Butler, General Franklin and General Dana. At the battle of Labadieville, La., while carrying an order under a terrific fire he had his horse shot from under him by a shell from the enemy, narrowly escaping instant death. For his gallantry on this occasion he was complimented in general orders. His services were highly appreciated in the signal corps.

In 1888 he was appointed an aid-de-camp with the rank of colonel on the staff of Gov. William P. Dillingham. On his return from the army he engaged in business at Derby Line until 1866, when he was appointed deputy collector of customs for that port, which office he retained until 1872, when he resigned to engage in the manufacture of the Reece sewing machine. On account of the panic of 1873-'75 this business failed of success, and in 1879 he commenced the manufacture of taps and dies. Beginning with a small force of men, by careful and painstaking efforts, he gradually built up a large and important industry. The works are located at Derby Line, with a second complete plant at Rock Island, P. Q. The firm is known as Butterfield & Co., and they manufacture taps and dies and tools for engineers' and steam fitters' use. In 1888 his younger brother, Gen. F. G. Butterfield, became associated with him in business.