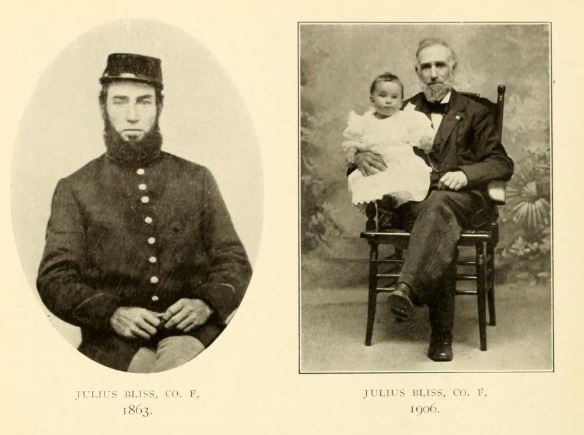 JULIUS BLISS born in Jericho, Vt., April 15, 1833. Educated in the common schools. Occupation a farmer. Married Helen A. Balch, and by this union four children have been born to us. Enlisted September 10, 1862, as a private in Company F, 13th Regiment, Vermont Volunteer Infantry, leaving a wife and two children, which was the hardest battle I fought. Mustered in October 10, 1862, and was with my company always ready for duty when called on; was in the seven days' march to Gettysburg and in the battle, being slightly wounded in Pickett's charge. I did my whole duty, and was mustered out of service at Brattleboro, Vt., July 21, 1863; re-enlisted and was rejected. A charter member of Post 4, G.A.R., Morrisville. Followed farming with fair success and am now living with my son on a large farm in Morrisville, Vermont.