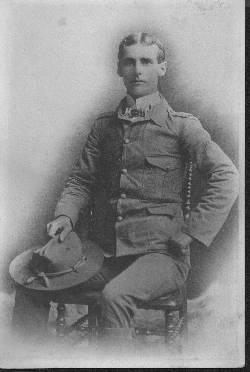 Pierre "Peter" Cyrille Alexis Bouvier was born in St. Simon, Canada on August 17, 1845. His family moved to Vermont around 1847 settling in Saint Albans. He enlisted in Swanton on February 5, 1864 at the age of 19, and was a member of the 5th Regiment Co. C. Peter participated in Sheridan's campaign in the Shenandoah Valley from Winchester to Mount Crawford and return. On September 22, 1864 he was wounded at Fisher's Hill. The wound was not very serious (he lost the little finger on his right hand). Even though his brothers joked that he had inflicted the wound upon himself just to go home, he in fact continued to participate until he mustered out 9 months later. He was involved in Petersburg on April 2, 1865 and took part in the pursuit and capture of Lee's army. After Lee's surrender, Peter's regiment marched to Danville, VA. To aid in preventing the escape of Johnston's army. When he mustered out on June 29, 1865, only 24 officers and 288 men were left out of the original 1,618 volunteers. Peter married Mary Butler in 1867. Later moved to Keene, NH where he worked as a blacksmith for the railroads. They had 7 children, Arthur, Leon, Louie, Annie, Emma, Valida, and Frederick. They also had an adopted daughter, Marge. Peter died on March 28, 1925. He was buried in what was the New section of the cemetery in Keene. His wife, Mary, who died in 1941, is buried beside him.

Peter had two brothers who also served during the Civil War:

Joseph Alexandre Octave Bouvier was born on May 27, 1837 in St. Hughes de Bagot, Canada. He entered the Union Army at the age of 25 in Swanton, VT. as a member of Co. F, 7th Vermont Volunteers. A history of his experiences can be found listed on a citation which is on display at the Franklin County Historical Museum in Saint Albans, VT. He was discharged for a disability on March 5, 1863 in Pensacola, FL.

Simeon "Antoine" Bouvier was born on August 27, 1842 in St. Simon, Canada. He enlisted on May 2, 1861 and served in the Co. A, 1st Vermont Infantry only to muster out 3 months later on August 16, 1861. Antoine died on August 6, 1866 from an accidental drowning in the Missisquoi River in Canada. He was married to Virginia Raymond Toulouse and left a son, Antoine II.