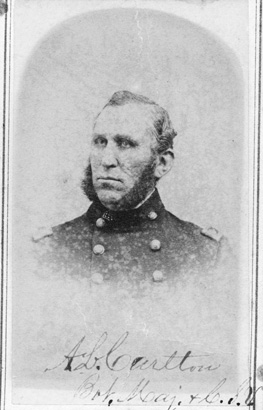 Maj. Alfred Lathrop Carlton, son of Benjamin F. and Betsey (Lathrop), cousin of Daniel Webster, was born in Morristown, Vt., in 1829. He obtained a good education and was several years a teacher. In 1854 he married Miss Margaret Fisk, settled as a merchant in Montpelier, where he remained a successful merchant until he died, with the single exception of the time he spent in the defense of our country in the late Rebellion. In the summer of 1862 Mr. Carlton enlisted into the Eleventh Regiment, then in camp at Brattleboro, and was very soon commissioned quartermaster of the regiment by Gov. Holbrook. This regiment was some time employed in the defense of Washington city. He was, while thus engaged, promoted to the responsible post of commissary of subsistence with rank of captain, and soon had the immense work of supplying the whole Army of the Potomac with stores and beef cattle. In a trip into Pennsylvania he took out half a million dollars, and drew on the government for half a million more, which he expended in purchasing cattle. Senator Collamer was instrumental in his promotions, and inquired at headquarters after his standing and was answered: "He is a model officer. His capacity, integrity, efficiency, and invariable habit of closing up his affairs every day are worthy of all praise." As an attestation of his honorable record as an officer he was breveted major before he left the service. Mr. Carlton returned to Montpelier at the close of the war, and to the duties of citizenship, and soon united with Bethany church. He had deep convictions and strong prejudices, dispised hypocrisy and duplicity, and was an earnest worker in temperance and moral reforms. He died in Montpelier, May 29, 1874.