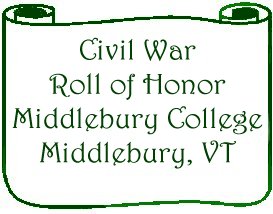 Thomas Herbert Davis (1836-1867), Captain, Company B, First Regiment, Virginia Infantry, C.S.A. Captured in Pickett's charge at Gettysburg and imprisoned at Johnson's Island, from which he made a sensational escape to Canada. He returned to the Confederate army and was again captured, at Sailors' Creek, April 6, 1865.

Albert Abijah Crane (1836-1864), First Lieutenant, Company A, Sixth Regiment, Vermont Volunteers. Killed in the battle of the Wilderness, May 5, 1864.

Richard Stanley Tuthill (1841-1920), enlisted immediately after graduation, and served successively with Logan's Scouts and as Second and First Lieutenant in DeGolyer's Black Horse Battery (H of the First Michigan Light Artillery), in the Atlanta campaign with General Sherman and in the fighting about Nashville, receiving such promotions for meritorious service. He served till close of Civil War.

Henry Dwight Smith (1841-1923), Sergeant, Company K, First Cavalry, Vermont Volunteers, 1861-1865. Captured in Wilson's raid, near Richmond, about six months before the close of the war. From then until his discharge on Feb. 6, 1865, he was in Andersonville prison.