Although not a Vermonter, the First Vermont Brigade often served under General Sedgwick, and he was one of their most beloved commanders. Tragically, he was killed by a Confederate sharpshooter's bullet on 9 May 1864 at Spotsylvania, Va., depriving the Army of the Potomac of one of it's most capable leaders. Rather than trying to write something about him, I thought I'd let his Chief of Staff do the honors.

The Death of General John Sedgwick 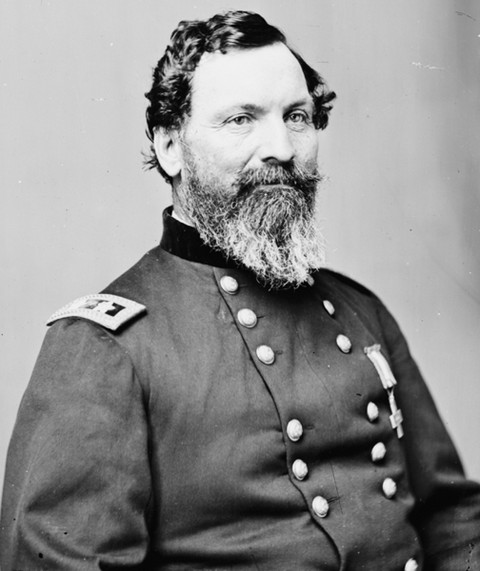 On May 8th, 1864, the Sixth Corps made a rapid march to the support of Warren, near Spotsylvania Court House. We arrived there about 5 p. m., and passed the rest of the day in getting into position on Warren's left. After nightfall General Sedgwick rode back into an open field near General Warren's headquarters and, with his staff, lay down on the grass and slept until daylight. Shortly after daylight he moved out upon his line of battle. We had no tents or breakfast during that night or morning. The general made some necessary changes in the line and gave a few unimportant orders, and sat down with me upon a hard-tack box, with his back resting against a tree. The men, one hundred feet in front, were just finishing a line of rifle-pits, which ran to the right of a section of artillery that occupied an angle in our line. The 1st New Jersey brigade was in advance of this line.

After this brigade, by Sedgwick's direction, had been withdrawn through a little opening to the left of the pieces of artillery, the general, who had watched the operation, resumed his seat on the hard-tack box and commenced talking about members of his staff in very complimentary terms. He was an inveterate tease, and I at once suspected that he had some joke on the staff which he was leading up to. He was interrupted in his comments by observing that the troops, who during this time had been filing from the left into the rifle-pits, had come to a halt and were lying down, while the left of the line partly overlapped the position of the section of artillery. He stopped abruptly and said, '' That is wrong. Those troops must be moved farther to the right; I don't wish them to overlap that battery." I started out to execute the order, and he rose at the same moment, and we sauntered out slowly to the gun on the right. About an hour before, Iliad remarked to the general, pointing to the two pieces in a half-jesting manner, which he well understood, "General, do you see that section of artillery? Well, you are not to go near it today." He answered good-naturedly, "McMahon, I would like to know who commands this corps, you or I?" I said, playfully, "Well, General, sometimes I am in doubt myself"; but added, "Seriously, General, I beg of you not to go to that angle; every officer who has shown himself there has been hit, both yesterday and to-day." He answered quietly, "Well, I don't know that there is any reason for my going there." When afterward we walked out to the position indicated, this conversation had entirely escaped the memory of both.

I gave the necessary order to move the troops to the right, and as they rose to execute the movement the enemy opened a sprinkling fire, partly from sharp-shooters. As the bullets whistled by, some of the men dodged. The general said laughingly, "What! what! men, dodging this way for single bullets! What will you do when they open fire along the whole line? I am ashamed of you. They couldn't hit an elephant at this distance." A few seconds after, a man who had been separated from his regiment passed directly in front of the general, and at the same moment a sharp-shooter's bullet passed with a long shrill whistle very close, and the soldier, who was then just in front of the general, dodged to the ground. The general touched him gently with his foot, and said, "Why, my man, I am ashamed of you, dodging that way," and repeated the remark, "They couldn't hit an elephant at this distance." The man rose and saluted, and said good-naturedly, "General, I dodged a shell once, and if I hadn't, it would have taken my head off. I believe in dodging." The general laughed and replied, "All right, my man; go to your place."

For a third time the same shrill whistle, closing with a dull, heavy stroke, interrupted our talk, when, as I was about to resume, the general's face turned slowly to me, the blood spurting from his left cheek under the eye in a steady stream. He fell in my direction; I was so close to him that my effort to support him failed, and I fell with him.

Colonel Charles H. Tompkins, chief of the artillery, standing a few feet away, heard my exclamation as the general fell, and, turning, shouted to his brigade-surgeon, Dr. Ohlenschlager. Major Charles A. Whittier, Major T. W. Hyde, and LieutenantColonel Kent, who had been grouped near by, surrounded the general as he lay. A smile remained upon his lips but he did not speak. The doctor poured water from a canteen over the general's face. The blood still poured upward in a little fountain. The men in the long line of rifle-pits, retaining their places from force of discipline, were all kneeling with heads raised and faces turned toward the scene; for the news had already passed along the line.

I was recalled to a sense of duty by General Kicketts, next in command, who had arrived on the spot, and informed me, as chief-of-staff, that he declined to assume command of the corps, inasmuch as he knew that it was General Sedgwick's desire, if anything should happen to him, that General Horatio G. Wright, of the Third Division, should succeed him. General Rieketts, therefore, suggested that I communicate at once with General Meade, in order that the necessary order should be issued. When I found General Meade he had already heard the sad intelligence, and had issued the order placing General Wright in command. Returning I met the ambulance bringing the dead general's body, followed by his sorrowing staff. The body was taken back to General Meade's headquarters, and not into any house. A bower was built for it of evergreens, where, upon a rustic bier, it lay until nightfall, mourned over by officers and soldiers. The interment was at Cornwall Hollow, Connecticut.

The Brattleboro Grand Army of the Republic Post was named after General Sedgwick.

Don Streeter, one of our contributors, recently visited Sedgwick's gravesite and took some pictures. 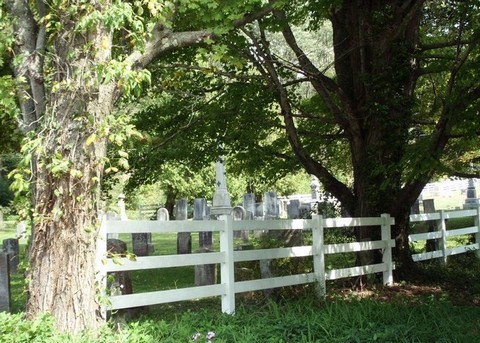 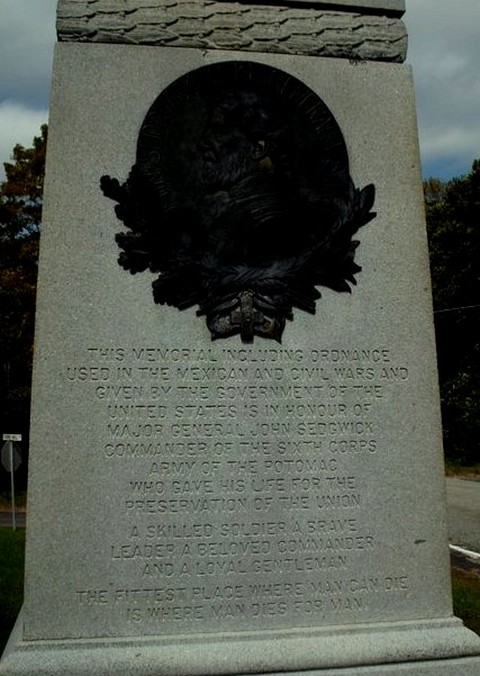 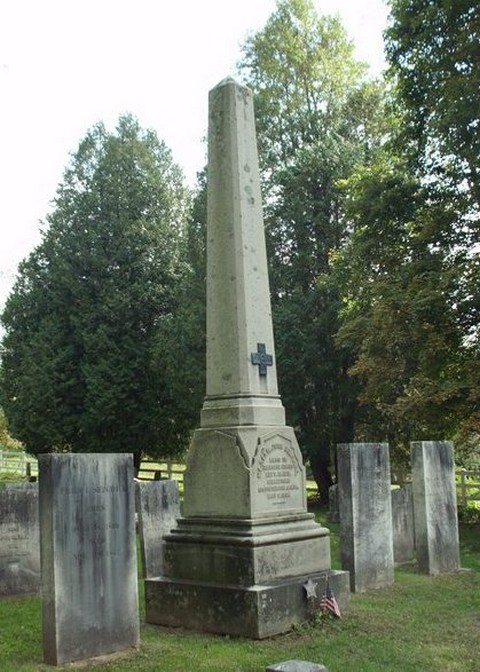 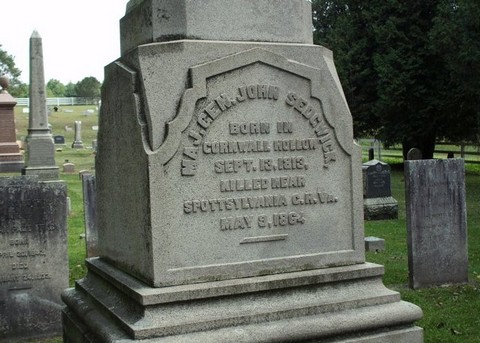 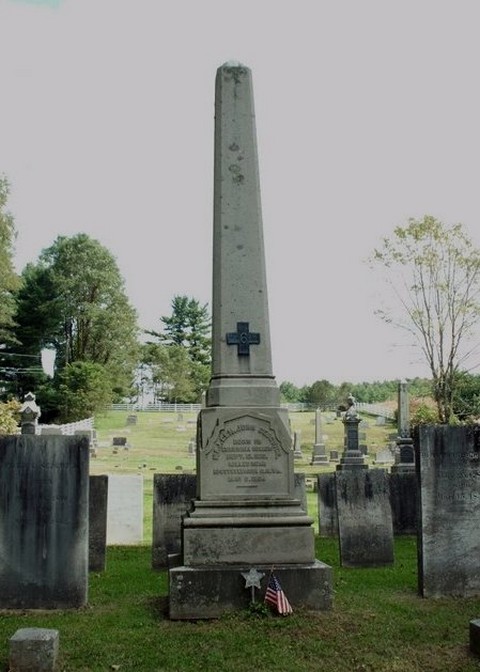 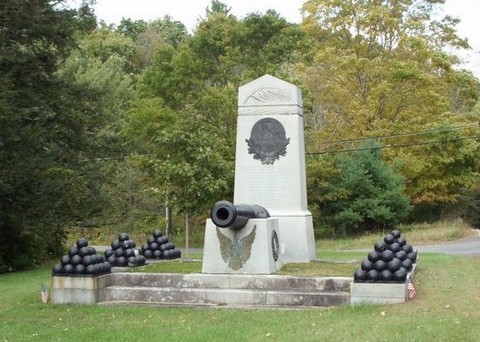 Photograph courtesy of The Library of Congress.