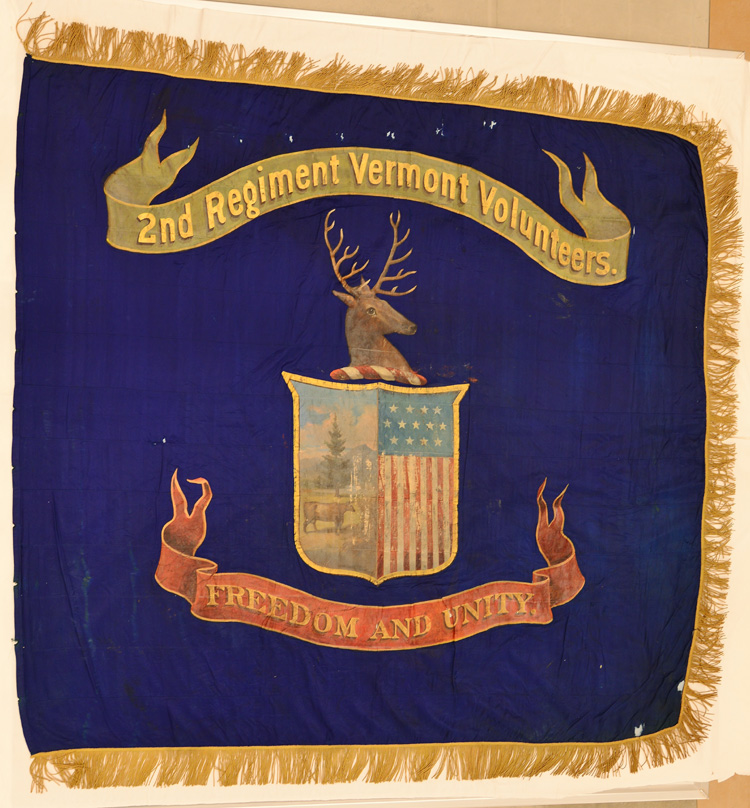 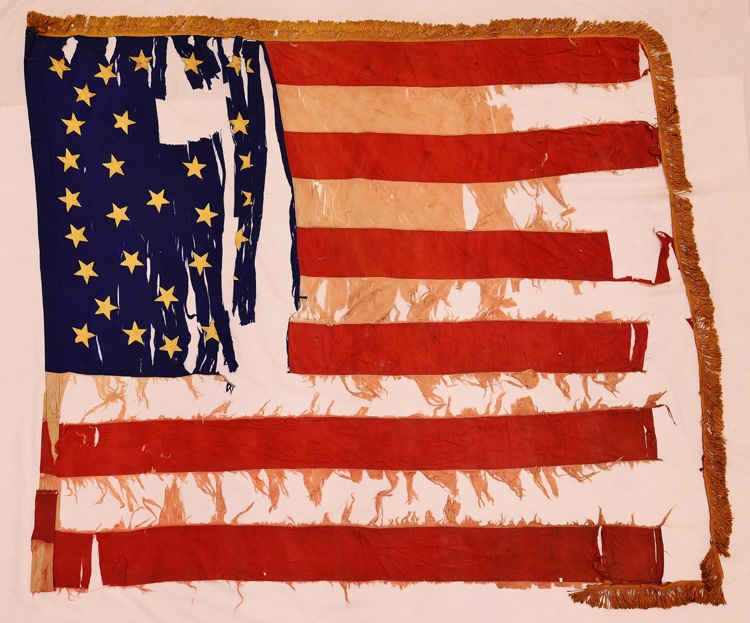 Marker in Battery Park, Burlington, to commemorate the departure of the 2nd Vermont from its mustering point at the nearby Fairgrounds. Photo courtesy of Carol Paradis.

The 2nd Regiment was organized at Burlington and there mustered into the U. S. service for three years on June 20, 1861. It left Burlington for Washington, June 24, and encamped on Capitol Hill until July 10, when it was ordered to Bush Hill, Va., where it was attached to Howard's brigade, Heintzelman's Division, with which it fought at Bull Run on July 21. It was next sent to Chain bridge for guard duty along the Potomac, and assisted in the construction of Forts Marcy and Ethan Allen. In September it was formed with the 4th and 5th Vermont regiments into the Vermont Brigade (later known on many battlefields), the 2nd brigade of Smith's division. Winter quarters were established at Camp Griffin and occupied until March 10, 1862, when the regiment marched to Centerville, thence to Alexandria, where it was ordered to Newport News and participated in the Peninsular campaign. It was in action at Young's Mills, Lee's Mills and Williamsburg. In the organization of the 6th Corps, the Vermont Brigade, to which had been added the 6th Vt., became the 2nd brigade, 2nd division. From April 13 to May 19, 1862, the brigade was posted at White House landing. On June 26 it shared in the battle of Golding's farm and in the Seven Days' battles it was repeatedly engaged. It was ordered to Alexandria and to Bull Run late in August. The corps was not ordered into the battle and was next in action at Crampton's Gap and Antietam in September. It fought at Fredericksburg Dec. 13, 1862, after which winter quarters were established near Falmouth and broken for the Chancellorsville battles in May, where the 6th Corps made a gallant charge upon the heights. It fought at Gettysburg, and from Aug. 14 to Sep. 13, 1863, the brigade was stationed in New York to guard against rioting and then rejoined the corps. Winter quarters were occupied with the Army of the Potomac near the Rapidan and a large number of members of the regiment reenlisted. The command continued in the field as a veteran organization and broke camp May 4, 1864, for the Wilderness campaign. On the opening day of the fight at the Wilderness, Col. Stone was killed and LtCol. Tyler fatally wounded. A number of the bravest officers and men perished in the month following, during which the Vermont Brigade fought valiantly day after day with wonderful endurance, at the famous "bloody angle" at Spotsylvania, at Cold Harbor and in the early assaults on Petersburg. On July 10 it formed a part of the force ordered to hasten to Washington to defend the city against Gen. Early, and shared in the campaign in the Shenandoah Valley which followed - the fatiguing marches and counter-marches and the battles of Charlestown, Fisher's Hill, Winchester and Cedar Creek. During the last named battle the brigade held its ground when it seemed no longer tenable and only withdrew when it was left alone. Returning with the 6th Corps to Petersburg in December, it participated in the charge on March 25, 1865, and the final assault April 2, after which it joined in the pursuit of Lee's army and was active at the battle of Sailor's Creek, April 6, where it is said to have fired the last shot of the 6th Corps. The service of the 2nd closed with participation in the grand review of the Union armies at Washington, after which it returned to Burlington. The original members who did not reenlist were mustered out on June 29, 1864, the veterans and recruits at Washington, July 15, 1865.

The total strength of the regiment was 1,858 and the loss by death 399, of which number 224 were killed or died of wounds and 175 from other causes. In his well-known work on 'Regimental Losses," Col. Fox mentions the 2nd Vt. infantry among the "three hundred fighting regiments" of the Union army.