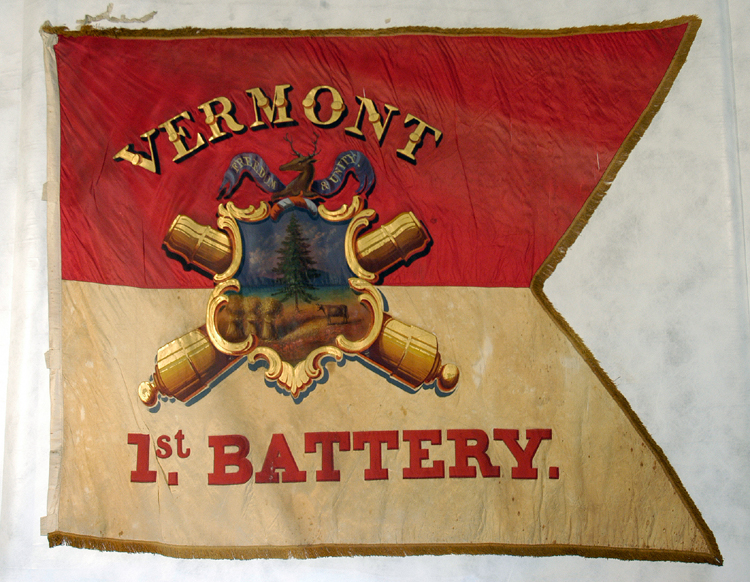 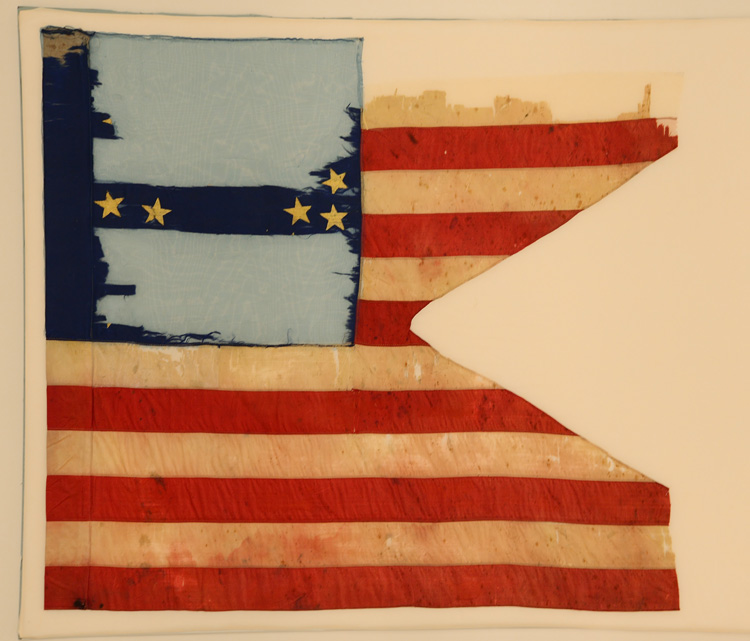 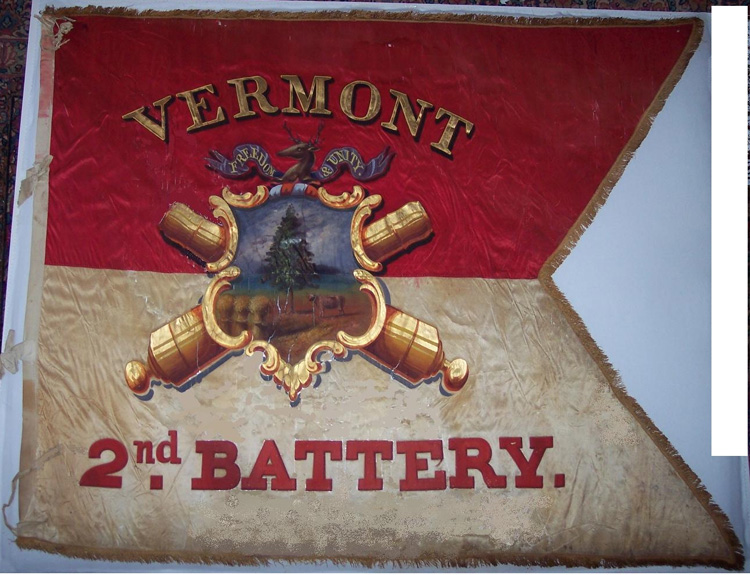 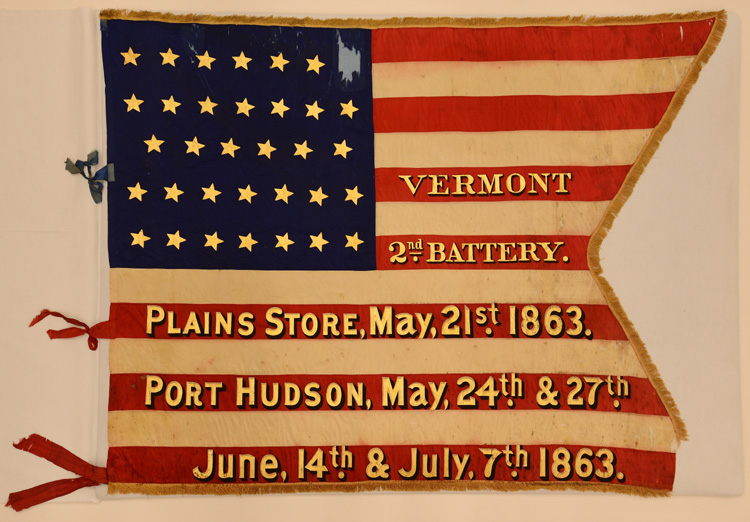 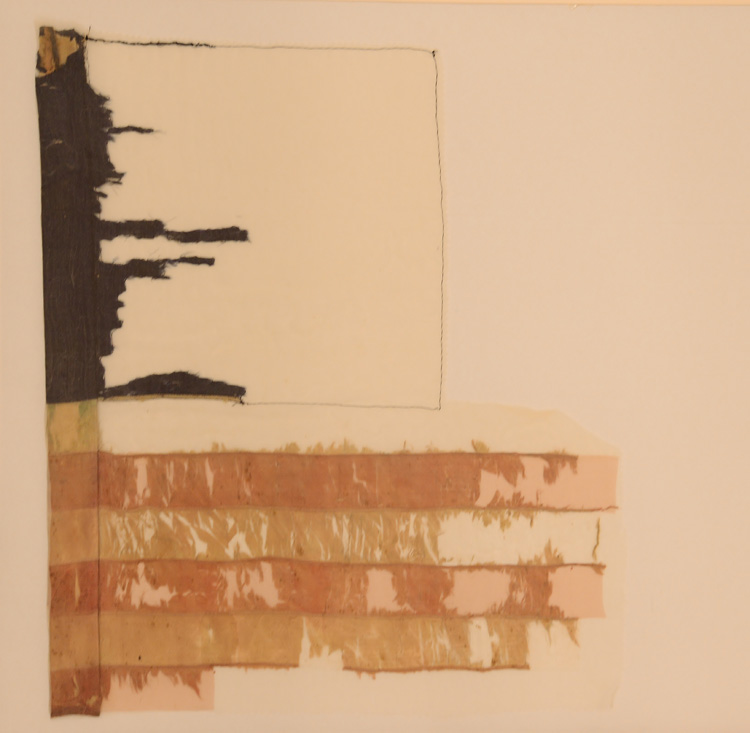 Vermont furnished three batteries of light artillery during the war.

The First Vermont Battery Light Artillery, Hebard's Battery, aka Grey Horse Battery, served in the Department of the Gulf of Mexico.

The 1st owed its origin chiefly to the exertions of George T. Hebard, of Chelsea, who enlisted about 100 men at Montpelier near the close of the year 1861, and at the same time about 50 more were enlisted at South Shaftsbury by George W. Duncan. The battery was designed to form part of the New England division for service with Gen. Butler. The men rendezvoused at Camp Holbrook, Brattleboro, Jan. 21, 1862, where they were attached to the 8th Vt. infantry and mustered into the U. S. service for three years on Feb. 18, 1862. It left the state with the 8th on March 6 and embarked at New York for Ship island. Miss., on the loth. On its arrival at Ship island, April 5, it was detached from the regiment and assigned to Gen. Phelps' brigade as an independent command. Early in May two sections proceeded to Camp Parapet on the Mississippi river, where they were joined by the 3rd section in June. Here it was equipped with 6 brass field pieces, caissons, battery wagons and forge, but had as yet no horses. After a time it was assigned to man some heavy barbette guns commanding the river. When the troops in the Department of the Gulf were reorganized by Gen. Banks in Dec, 1861, the battery was assigned to the 1st division (Gen. T. W. Sherman) and was stationed at Metaire ridge race course, between New Orleans and Lake Pontchartrain. On Jan. 21, 1863, Capt. Duncan resigned, and Lieut. Hebard assumed command of the battery, which attained a fine reputation for discipline and efficiency under his skillful instruction. In May it moved to Port Hudson, where it was active throughout the siege as well as in the unsuccessful assaults in May and June. Many attempts were made by the enemy to drive it from its position at "Battery No. 4," but the gunners disabled or dismounted every gun within range. Upon the surrender of Port Hudson it was stationed at various places along the Mississippi river, but principally at Baton Rouge. It shared in the Sabine Pass expedition, and during the winter and spring of 1864 was stationed at Brashear City, La., on garrison duty and also served by detachments on the steamers of the quartermaster's department. It was active in all the engagements and skirmishes of the Red River campaign except the battle of Mansfield. At the battle of Pleasant Hill it was charged by infantry and such was its danger of capture that Gen. Banks ordered the guns to be spiked and the men to retreat. Instead of obeying Capt. Hebard gave the order "Spike your guns with canister and - quick, too." The order was promptly obeyed, several volleys of canister at short range broke the enemy's lines and ended the action. The actions at Yellow bayou, Bayou de Glaize, and the crossing of the Atchalafaya river closed the active service of the battery. During the remainder of its service it was successively stationed at Morganza bend and Baton Rouge. At the latter place its equipment was turned over to the 13th Wis. battery, and on July 22 the original members returned home and were mustered out at Brattleboro, Aug. 10, 1864. The recruits were transferred on the same day to the 2nd Vt. battery.

The total enrolment of the battery was 217, of whom 3 were killed or mortally wounded, 43 died of disease and accident, 3 deserted and 7 were wounded.

The Second Vermont Battery Light Artillery, "Chase's Battery," served in the Department of the Gulf of Mexico.

The 2nd battery, like the 1st, was intended to form part of Gen. B. F. Butler's expeditionary force for service in the Department of the Gulf. A recruiting office was established at Leicester, afterwards removed to Brandon, in charge of Lensie R. Sayles, and 89 men were mustered into the U. S. service for three years Dec. 16, 1861, 20 more on the 24th, when the battery rendezvoused at Camp Chase, Lowell, Mass., where 14 more men were enlisted, the battery then numbering 128 officers and men. It was armed with four 6-pounder Sawyer rifled guns and two 20-pounder Parrotts. While at Lowell, Capt. Sayles resigned and Capt. P. E. Holcomb of the 17th U. S. infantry was appointed in his place. On Feb. 6, 1862, the battery embarked at Boston on the "Idaho," and on March 12 reached Ship island, Miss., where it was attached to Gen. Phelps' brigade. It landed at New Orleans on May 2, the first Union battery in the city. On the last day of May it was ordered to Camp Parapet, 7 miles up the river from New Orleans, and remained here for 5 months, when it returned to New Orleans, where it was fully mounted for the first time. On Dec. 29 it started on the fruitless expedition to Galveston, Tex., and on Jan. 25, 1862, moved up the river to Donaldsonville, on Feb. 24 to Baton Rouge, where it was attached to Gen. Augur's division. It shared in an expedition to the vicinity of Port Hudson in March and again on May 18; was engaged for the first time at Plains Store, near Port Hudson, May 21 ; was active during the assaults on Port Hudson of May 27 and June 14 and was constantly under fire after July 4. On the surrender of Port Hudson it was the first battery inside the works. Early in August, the 2nd section under Lieut. Dyer moved on an expedition to Jackson, La., under the command of Maj. Hanham of the 12th, Corps d'Afrique. The expedition as attacked by Forrest's cavalry on the 3d, and Dyer and 15 men were captured through the inefficiency of the major in command. Dyer was wounded in the leg and was paroled.. The other prisoners were taken to Andersonville, where 5 died. On July 28 the battery shared in a fruitless expedition to Clinton, La., after which it continued to serve on garrison duty at Port Hudson until July 7, 1865. It then moved to Baton Rouge, and on the 9th proceeded home via Cairo, I11. It arrived at Burlington July 20 and was here mustered out on the 31st. The original members, except veterans and recruits to the number of 20, were mustered out Sept. 20, 1864. The battery with recruits then numbered 136 officers and men. Additional recruits afterwards swelled its number to 260 officers and men, which was in excess of the regulation number, and on March 1, 1865, the surplus men to the number of 118 were organized under orders from the department com- mander as the 1st company Vermont heavy artillery, for service in the works at Port Hudson.

The total enrolment of the 2nd battery was 456 officers and men, of whom 1 died of wounds, 47 of disease, or in prison, 19 deserted, 7 were wounded, and 16 were captured.

The Third Vermont Battery Light Artillery, "Start's Battery," served in the Army of the Potomac.

The 3rd battery, one of the last two organizations sent by the state to the war, was recruited by its commanding officer, Capt. Romeo H. Start, during the closing months of 1863. It rendezvoused at Burlington, was mustered into the United States service for three years, Jan. 1, 1864, left for Washington Jan. 15, where it was attached to the 22nd Corps and went into winter quarters at Camp Barry, the artillery camp of instruction. On Feb. 20, 1864, it was fully equipped as a mounted battery of light artillery, and on April 2 was assigned to the 6th corps. It was employed in railroad guard duty until May 4, when it was ordered to join the corps, overtaking it on the 6th in the Wilderness. It served as part of the guard for the base of supplies and for the provision and ammunition trains of the Army of the Potomac until the army reached Petersburg, where it remained upon the lines until Oct. 25, 1864, when it moved to City Point and garrisoned Fort McKean until Jan. 15, 1865. It then moved to the Weldon railroad and in February participated in the movement of the 6th corps to Hatcher's run. On Feb. 9, it occupied Fort Fisher, where it remained until the final assault on Petersburg, during which it was actively engaged. While upon the lines before Petersburg, prior to its removal to City Point, it served in Forts Morton, Michael, Battery 27, Battery 16, and Fort Phillips ; participated in the movement of the 2nd corps on Reams' station on the Weldon railroad, and was repeatedly engaged in severe artillery duels with the enemy. Though often under heavy fire, it fortunately escaped with small loss. It had its full share of hardships and exposure and faithfully discharged every duty. At the final assault on Petersburg, April 2, 1865, it had the honor of firing the signal gun, which inaugurated the general movement upon the enemy's works south of the city, and after the fall this battery, with the reserve artillery brigade of the 6th Corps, took charge of the captured artillery. Later it moved to City Point and on May 3 to Alexandria, where it turned over its guns to the ordnance department on the 5th and started for home. It was mustered out on June IS, at Burlington.

The total enrolment of the 3rd battery was 256 officers and men, of whom 21 died by disease and accident; 8 were honorably discharged, 1 was promoted, 1 transferred to veteran reserve corps, 5 deserted, and 3 were wounded.

The First Vermont Company Heavy Artillery was organized in March 1, 1865, from recruits of the Second Vermont Battery Light Artillery.

This organization was formed on March 1, 1865, from surplus recruits of the 2nd Vt. battery, light artillery, then stationed at Port Hudson, La., and remained on duty there during the remainder of its service. It was mustered out at Burlington, July 28, 1865.

It numbered 188 officers and men, of whom 7 were discharged for disability, 4 died of disease, 1 deserted, and 1 committed suicide.