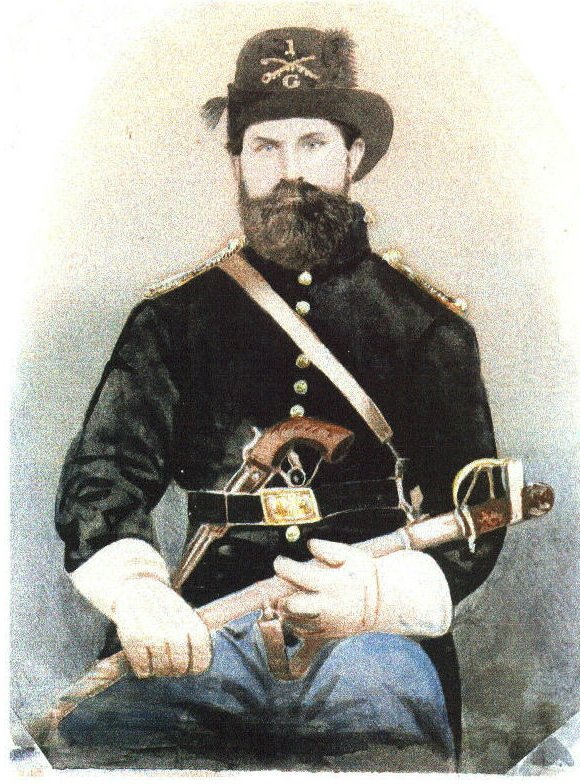 Daniel Morton Russell was born in Hoosick, New York on 2 January 1824 and died of his wounds and injuries received in Bennington on 4 November 1878. He enlisted in Company G on 21 November 1861 and received an honorable discharge on 19 November 1864.

Russell was the son of Spalding Russell (born in 1790 in New York) and Margaret Bratt (born 1791 in Schuylerville, New York.) She was the granddaughter of Captain Daniel B. Bratt, a company commander in the 14th Regiment of Albany County Militia during the Revolution and of 1st Lieutenant Nicholas Power, who served in the 10th Regiment of Albany County Militia. She is the great granddaughter of Bernardus Bratt (1704-after 1783), the "Patroon of Hoosick," who besides owning all of today's Hoosick and Hoosick Falls, served as an officer in King George's War and the French and Indian War. In 1756 he commanded the Albany County Militia at Fort William Henry and after the 1757 massacre served as a company commander in Sir William Johnson's regiment. The Bratts originally arrived in Albany in 1637 from Norway.

Daniel was 37 years old when he enlisted, leaving his jobs as farmer, mason and carpenter behind. This photograph was taken in Annapolis, Maryland in January-March 1862 (the regiment did not receive the Savage revolvers until reaching training camp; they ditched the dangerous self-cocking weapons in favor of Remington revolvers in June 1862.) After fighting in several minor skirmishes in the Shenandoah Valley April-May 1862, Company G was detailed along with Company A and three companies of the 1st Maine Cavalry on 24 May to locate Stonewall Jackson's advance guard north of Front Royal. The battalion fell back fighting to the streets of Middletown when commander Major William Collins (of the 1st Vermont) gave an order to charge down the Valley Pike into a cloud of dust he assumed to be kicked up by Nathaniel Banks' retreating wagon train. A blast of canister dismounted the rear ranks of leading Company A and Company G piled up into the wounded horses and men. Russell later wrote: "While in a charge my horse fell on to me and broke 2 of my ribs and injured my left knee & ankle. I also received two sabre cuts upon my left shoulder [from a falling Vermonter, not a Rebel] at the same charge. The results of these injuries and wound incapacitates me at times totally." After his death Luzetta added in her pension application that "while making a charge upon the enemy in an engagement at Middletown, Virginia on Banks' Retreat May 24, 1862 in advancing to close up the broken ranks of Company A who had had their rear rank cut down by a charge of grape [canister] was thrown down by his horse stumbling over the dead bodies and his horse fell on his left leg. Then other horses came tumbling together. In this melee his left knee and ankle were seriously injured by his horse falling on them. At same time his left shoulder was badly hurt by horses stamping on it and he had two or three ribs broken on his left side by a horses foot stepping on him. These injuries brought about nervous disorders which finally terminated in Spinal Disease and paralysis of which said Daniel M. Russell died on the fourth day on November 1878." (This application was prepared by lawyer Dennis Blackmer who was the 1st LT of Company that day.) This impressive pile-up of horses and men, noted even in Stonewall Jackson's after action report, actually killed only one Vermonter outright.

Russell went on in his pension application: "I was taken prisoner in this charge & kept by the enemy in a church at Middletown for 4 weeks, when I was sent from my Regt to the Parole Camp at Annapolis and rejoined the Regt at Alexandria about six months thereafter [in November 1862], and was sent to Hospital at Fairfax Seminary, Va., where I stayed 3 or 4 weeks when I was sent to hospital at Brattleboro, Vt." Russell remained in Brattleboro until the following February 1864 when he once more was sent to the front. On 8 April 1864 some of Mosby's men captured him after he strayed from his picket post to get a hot supper at a local house. Russell remained in a Confederate hospital in Richmond until his parole in August 1864. After a month in Camp Parole he received a thirty day furlough to return to Vermont in October 1864 and was mustered out in Vermont on November 19, 1864, a broken man.

He received his pension just before his death in 1878 and Luzetta was awarded a monthly payment until her death in 1910. Both of them would have been astounded to read in Peck's 1892 "Revised Roster of Vermont Volunteers" that the adjutant general of Vermont declared Russell to be a deserter because he failed to return to Annapolis at the end of his furlough and was discharged in Vermont. His pension file contains a copy of his honorable discharge. Like thousands of items in Peck's roster, Russell's record is printed wrong.

Daniel's younger brother William Russell served in the 52nd Massachusetts Infantry at Port Hudson and also returned a man broken in health. Three of Luzetta's nephews also served from Pownal: Corporal Myron Lillie of the 10th Vermont was killed at the Battle of the Monocacy, George Lillie of the 4th Vermont died at Camp Griffin in 1862 and his brother Sidney, also of the 4th, was discharged for disability after the Peninsula Campaign. It was quite a war for this family.

Russell's descendents have kept up the military tradition. His grandson Harry Morton Hoffman (1873-1945) served in the 6th Massachusetts Infantry during the Spanish-American War and later joined the Regular Army to fight in the Philippine Insurrection. Harry's son Elliott (1898-1980) served in combat in the US Navy during both World Wars. And I retired in 1997 as a strategic military intelligence officer with 29 years' service.