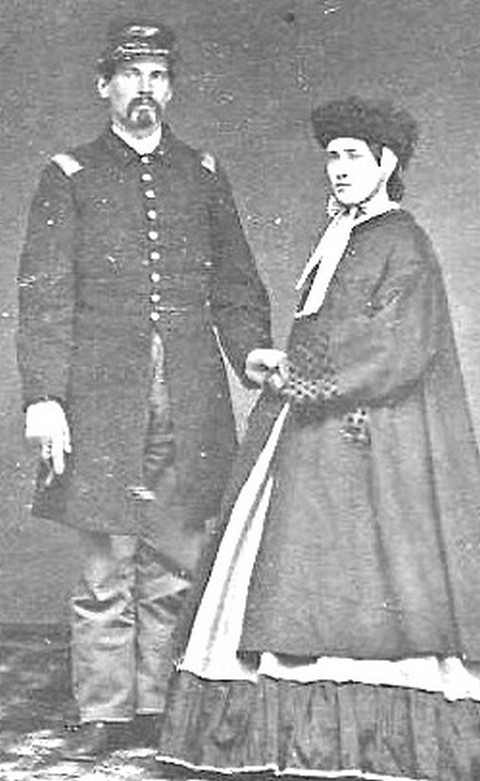 Carlos Wellington Carr grew up on West Hill, the son of Caleb and Elmina Carr. The family farm bordered on a farm owned by his brother-in-law, Dura Kinsman. The farm was near the one-room school on West Hill. Between 1850 and 1860, the Carr family moved to Brandon, so all three sons are credited to that town, as well as a son-in-law. Yet Caleb was an early settler of West Hill when it was part of the Land of Goshen.

Carr joined the Fourth Regiment, Company E, along with Ransom. Both men were sergeants. Carlos is frequently mentioned in the letters of Ransom Towle, beginning with a commentary about his health, in a letter dated November 7, 1861,

The great peculiarity of the cases of sickness here seems to be that when the disease has left a person, it is almost impossible to regain our strength ... "Carlos Carr is another case ... Most of the West Rochester Boys are unable to do duty though none of them [are] dangerously sick.

A rivalry developed between the two sergeants, and there was sharp criticism from Ransom when he reflected on the behavior of his fellow officers at the Battle of Lee's Mills earlier:

Pingree and myself were some half mile from the brave and redoubtable Carr and being separated by a swamp and dense wood I don't think he would be just the person to criticize Lieut. Pingree or myself in the premises. Capt. Terry, those under his command do say, was rather scarce during the fight. Lieut. Lillie was detailed to command another Co, Co. L., So that both Lieuts and myself were detailed from their portion of the Co. and when Capt Terry skulked Carr was next in command.

But I have yet to learn that Carr did more than was his reasonable duty. That Sergt. Richardson was lacking spunk I know from good authority to be untrue. Carr has been nothing but a whining meddlesome nuisance to the Co. playing sick and shirking duty half the time. He tried for a furlough and tried for a discharge and tried to make a fool and succeeded. He has done his best to injure me just because I was promoted over him---circulated a petition in the Co. once to get my position from me, but let him rip. So far I have said nothing and come out on top. So I have no reason to complain.[1]

Carlos had two brothers that later joined: Edwin, his older brother, was married to West Hill native Melva A. Jones was in Company G, 12th Vermont. His younger brother Rial Fayette joined Company H, 11th VVI in August and was mortally wounded at the Battle of Cedar Creek. He died of these wounds on November 14, 1864, and his exhumed ashes were brought back to Brandon by his brother-in-law, Jason K. Campbell.

Brandon - Maj. Carlos W. Carr, who had been ill but a short time, died about 12.30 o'clock Friday afternoon. He was 76 years old and is survived by a son and daughter, B.A. Carr and Mrs. Lulu Miller, one brother, Edwin Carr, and a sister, Mrs. Susan Campbell, all of this town. He was a member of St. Paul's Masonic lodge and of C.J. Ormsbee post, G.A.R., being a veteran of the Civil war. He enlisted in the 4th Vermont regiment in 1861 and served through the war. He was elected major of the Vermont national guard several years ago. The funeral will be held from the house on Carver street tomorrow afternoon at 2.30 o'clock.