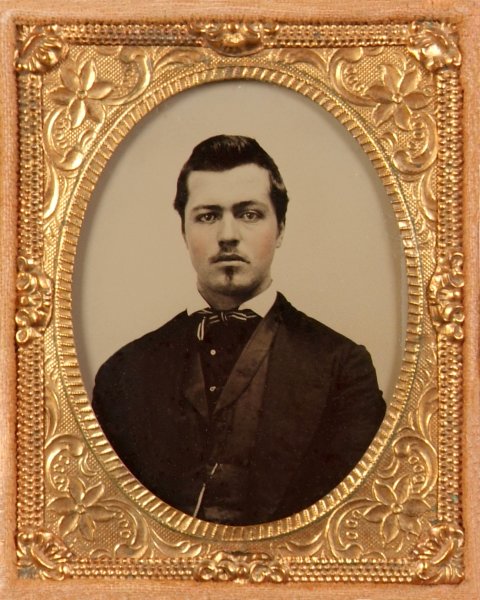 He enlisted in the Eighth Regiment Vermont Volunteer Infantry. He was under command of Gen. Phil H. Sheridan, in the Eastern army, and gave about three years of his life for the defense of the flag and the service of his country.

He was married to Miss Katie M. Dimick, at Warren, Vermont, March 31, 1867. He was a devoted husband, and an exemplary father. The uprightness of whose life will remain to his companion, and son, Eugene L. Bucklin a priceless legacy.

He removed from Vermont to Iowa in the spring of 1870, settling in Richland township, near the place where Herndon now stands, and in the fall of 1879 moved to the farm in HIghland township.

He united with the Methodist church in Richland township in the winter of 1875. He was a firm believer in the religion of Jesus Christ, and lived a good life, respected by his fellow men, and trusted by those who were naer and dear to him. Whn the time of his departure was near, he declared his readiness to meet his God.

The funeral services were held from the Methodist church in Bayard, conducted by Rev. Armstrong, Rev. Jesse Cole, Chaplain of the Soldier's Home at Marshalltown, being present, by request of the pastor, offered a touchingly tender and beaitiful prayer. The address by Rev. Armstrong, which followed, was simple and practical, bearing on the utility and beauty of a useful life, as a fit preparation for a blessed life to come. The Post and Relief Corps were present. The interment took place at Highland and was in charege of Robert Henderson Post.

He owns forty acres of land under cultivation, having sold eighty acres of his farm last year. He has a number of fine stock and a comfortable dwelling with orchard in connection. In 1873 he was elected school director, and three years later was trustee.