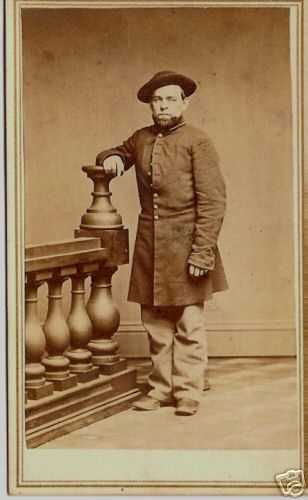 Edgar Bullard died Sunday afternoon at 1:30 o'clock at the home of his son, Leo Bullard, at Cady's falls, where he had resided for the past six years. Mr. Bullard had been I failing health for several years and had been confined to his room since Dec. 26. Death was due to rheumatism and complications.

Edgar Bullard, youngest son of Betsey Calkins and Willard Bullard, was born in Hyde Park, Nov. 4, 1833. He was united in marriage Feb. 15, 1870, to Mrs. Ordelia Burnham Clegg and to them was born three children - Mrs. Hattie Edgerton of Hyde Park, Edwin Bullard, who died May 18, 1910, and Leo Bullard, with whom he resided. His life, with the exception of a few years, was spent in Hyde Park.

The deceased was a member of Co. D, 5th Vt. Vols. He was mustered into service Sept.16, 1861, at St. Albans and served in the war three years. He is a member of the local G.A.R. Post. He was shot through both legs in the battle of Savage Station and had a worthy war record.

He is survived by his wife, two children, a twin brother, Edwin Bullard of Toledo, Iowa, a step-son, Robert Clegg, of Craftsbury and seven grandchildren.

The funeral was largely attended by neighbors, friends and comrades at his late home Tuesday afternoon, Rev. O.M. Boutwell of Binghamville officiating. The burial was at Hyde Park and the floral tribute was large and beautiful. The bearers Austin Wilkins, M. Manning, L.L. Camp, D.H. Rogers and S.D. Luce of this place and Jackson Sargent of Stowe, all Comrades.

Among those from out of town to attend the funeral were Edric Hunt of Binghamville, I. Learned and Mr. and Mrs. Loren Smith of Wolcott, Eli Burnham of Cambridge and Mr. and Mrs. Robert Clegg of Craftsbury.