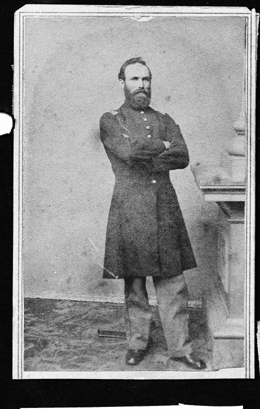 Educated in the common schools and at Newbury Seminary, he remained on his father's farm until the age of twenty-one, when he removed to the town of Bradford, where he has since resided.

He is a Republican and has been elected to fill several town offices and in 1890 represented his town in the Legislature. A trustee of Bradford Academy for fifteen years, he is strongly interested in the cause of education.

Mr. Chamberlin enlisted in the United States service in May, 1861, under the first call of President Lincoln, being a member of the Bradford Guards. For the first two months of the war he served as sergeant in Co. D, 1st Vt. Vols. Upon the call for nine months' men in 1862, he enlisted in the 12th Regt. and went out as captain of Co. H, (Bradford Guards) and was mustered out with the regiment. Captain Chamberlin was a charter member of Washburn Post, G. A. R, No. 17, and for several years its Commander.

Captain Preston S. Chamberlin of Bradford, who died in that town Thursday in his 84th year, was a veteran of the Civil war, having entered the service as first sergeant of Company D, First Vermont Volunteers, on the first call in 1861. He afterwards went out as captain of Company H, 12th Vermont Volunteers.

He was born in Newbury on Nov. 28, 1832, and married Hannah S. Corliss at Bradford on Jan. 17, 1856. The 60th anniversary of their marriage was celebrated at Bradford last January.

Captain Chamberlin had served the town of Bradford in several official capacities, representing it in the legislature in the session of 1890. He had been commander of the Grand Army post in Bradford. He is survived by Mrs. Chamberlin and by Mrs. George Grant and Miss Edith J. Chamberlin.

The funeral of Capt. Preston S. Chamberlain, whose death occurred Thursday, April 27, was held at his late home the following Saturday, the house being filled with relatives and friends of the deceased. Rev. A.R. Crewe officiated. Mr. Chamberlain was born in Newbury nearly 84 years ago. He was married to Hannah S. Corliss at Bradford, Jan. 17, 1856. He had lived in Bradford since his marriage and has served the town as lister, selectman and auditor and represented it in the legislature in 1890. He was a veteran of the Civil war. For a number of years he drove the upper plain school team and by his pleasant disposition and kind words endeared himself to the scholars some of whom are now grown up and some are still in school. He leaves a wife and three daughters, Mrs. Annie Spaulding, who lives at home, Mrs. G.R. Grant of Bennington, and Miss Edith Chamberlain of Vergennes; two grandchildren and a great-grandchild; also a brother and a sister, neither of whom reside here.

Capt. Preston S. Chamberlain, who died at Bradford on Thursday, was a member of the board of trustees of the Vermont soldiers' home. He was a veteran of the civil war, serving two enlistments, the last as captain of company H of the 12th regiment. He represented the town of Bradford in the legislature in 1890. The survivors are a widow and two daughters, Mrs. George Grant of this village and Miss Edith Chamberlain of Bradford.