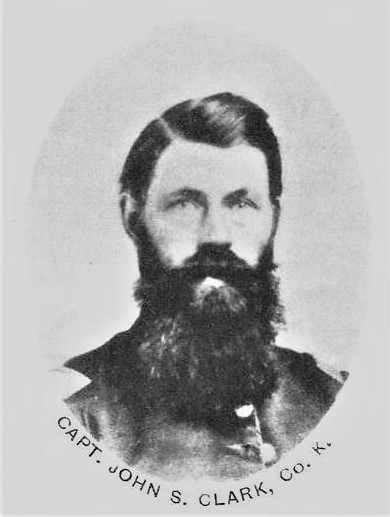 The Vermont 8th were fairly located upon this side of the river, and beginning to keep house like cheerful veterans, when the letters and papers from our friends brought the sad news that Gen. Banks had been repulsed with heavy loss, that our National Capital was in imminent danger, and that our noble and honest president had called for more troops.

To us, such was unexpected. Our imperfect knowledge of matters at the North had prepared us to conclude that Generals Banks, McClellan and Burnside were keeping pace with the army in the West, and that complete success was inspiring our forces everywhere; that Washington and Baltimore were as safe as New York and Boston.

As our eye surveyed the great battlefield, with hands and feet swiftly punishing our foxy foes, with a heart full of admiration for the symbol of Freedom that was floating above our heads; with a soul deep love for my home and the dear ones there' I had hoped, most fondly hoped --- the war was about being ended, and the rebellion put down.

In my dream I saw the "Flag of our Union" playing upon the breezes of the whole country; witnessed the bonds that made us brethren of one glorious confederacy; heard the hammer and loom as the workshop, and factory were noisy and jubilant with the industry of the operative and mechanic; I knew the farmer was tilling his broad acres, and casting his waiting seed upon them; that the planter, in his peculiar dignity was enjoying the sweat of his "property," as they brought to his crowded presses a mine of wealth in cotton and sugar; and methought I realized the fact that I had returned to my "home," bearing the precious sheaves of peace and honor with me.

In the reverse I had forgotten all past sufferings and present dangers --- had almost believed a lie. I could see that Davis, Beauregard and Bragg were cowards, and that their armies were decimated and demoralized for want of proper ordnance, ammunition, provisions, and good currency. But such news as we have received to-day strips us of such speculations, and I settle into the conviction that we are in the very midst of a rebellion, wicked as treason can be strong as resolute and brave people can make it, and to end only when the North shall destroy their armies, hang their leaders, confiscate their property and subdue their very soul.

Here, then, waking from the delusion of the past, with eyes wide open and minds studiously unbiased, I assume this to be the more reasonable stand point; but upon it our manhood appropriates the real dignity and enthusiasm of patriot soldiers bound to fight, if need be, and to conquer, if possible. We have sworn allegiance to the government and fidelity to our posts, and we mean to abide them till the war shall end and peace have rendered the plowshares and pruning-hook more appropriate implements for our use than any ordnance of war. Misfortunes we ought to expect, --- reverses we shall experience, for civil war never existed without them. We may suffer for all the wants of a new army, which with its untried officers and experienced commissaries, cannot always be met with at the most opportune moment. Long marches, guard duties, bad cooking, poor rations, sleepless nights and weary, home-sick days, pertain to the soldiers life, and by them he is tried, and found wanting, or made a hero.

I can assure you that we have endured our full ratio of hard times, both upon the sea, and on the land; have been tired, and hungry, and sick at times, and wondered "Do they miss me at home?" --- but never dismayed, nor have we regretted that our names were enrolled among the defenders of the best government on earth.

Let the rebel horde pass the Potomac; let Washington be surrounded by her armed legions, let the government of our "noble sires" be more directly endangered, and the spirit of the Green Mountain state WILL have its response in prompt acceptance of any call the president may make upon her sons.

Say to your neighbor --- tell all the people of Vermont --- that the nine-thousand men she has in the field are interested in this matter, and do expect she will rise to the full dignity and importance of the day and defend her defenders.

Hesitation now is cowardice. We have returned blow for blow with comparative ease; the cords that binds this southern confederacy are nearly sundered. They are encompassed on every side and fear our approach. The federal gulf of defeat and despair is opening wide to receive them, and their retribution is well nigh sealed. The cloud of discord and threat of war that settled so portentously upon the whole people has lifted its wicked head above the valleys and high hills --- and one more united and glorious onset from the free north will dissipate its heart of blackest, darkness forever from this godly land.

We are ready for this final charge. Our uniforms are tightly on, our knapsacks are packed and our weapons are in our hands. We wait only for your response. Let it be a willing yes, and march at once to to rescue the falling, and we'll meet you as the tried and honored here greets his equal.

FROM THE VERMONT 8TH REGIMENT
ALGIERS; SEPT 20, 1862
To The Editor To The Caledonian:

In these wonderful times --- stirring events, attractive military reviews and great courage, no more interest the warrior than do virtue knowledge and religion, the patriot and the philanthropist.

While sage and poet are endeavoring to crush out the rebellion, and applauding the people for lifting themselves above the endearments of home to protect the great charter of their rights, the soul of the republic is fast assuming the position that Freedom is of their birth-right of all who breath the air which so gracefully waves her stars and stripes.

Our present study is not limited to what number of men we must send into the field the character and tonage of vessels which ought to ride upon our waters, and the wherewithal they are to be clothed and fed and armed. We are now compelled by orders and decrees above our volitions, not only to study but act, upon the no less important inquiry, what shall be done for the present employment and future elevation of the ten thousand bright, active, and interesting contraband children who are being brought into our camps by parents bound to be free. They can neither cook, wash ,dig, or handle the musket; nor will they quietly sit and grow wise by thinking their sportive hours away. They will not be great and good by simply seeing the novelties of camp life, nor by listening to the foolish jests and wicked words of those who ought to be men. It is as true of them as of white men born free, that Satan will find something for idle hands to do. I discover in the keen sparkles of their black eyes, in their ready and ingenious wit, and in their light add graceful movements a foundation, possessing those elements of character requisite for self independence, and upon which education and religion may rear a temple wherein God and angels would delight to dwell.

We have within our lines nearly three thousand contrabands, and fully one- half are under twelve years of age. They appear to be as intelligent and vigorous as any equal number who may be promiscuously gathered from any other section, or race, whose means for intellectual and moral culture have been no greater.

If we had a thousand spelling books and an equivalent of another thousand in cards and charts, schools and classes might be organized and managed to the pleasure and profit of both giver an receiver. We have men enough who would be pleased to devote the mercenary time to such instruction, and OI am happy yo know that Col. Thomas would give the enterprise his most hearty co-operation. Philanthropists of Vermont! Are you ready to work with us in this matter / And will you forward the necessary books immediately? --- I know the times are hard and unpropitious for such benevolent demands, and that many will wish to defer action until a more convenient season, but our future depends so much upon the active present, that deferment of little influences now may culminate in great evils.

I know that the war is a desperately wicked thing and will surely curse the people who caused it; that its present is only evil, but I see in the almost present future the dawning of a happier day, the beauty and purity of whose light will pay our children a thousand fold for the sorrow and suffering which covers the land. From the footprints and graves of this generation will be taught lessons of political truth, which wise men and statesmen have hardly dared to read. " The slave must go free". is written clearly on the events of 1861-62 as God's purposes revealed in His Word and upon every visible work of His hand. I read it in the changed sentiment of the North, in the Pharaoh-like desperation of the South, and especially in those wild marches and well earned victories which so destructively urges onward the veteran, rebel armies of Virginia. Then prepare them for their Freedom Gentleman, send us the books. Then prepare them for their freedom Gentlemen, send us the books.

By the last arrival from New Orleans, we learn with deep sadness, of the death of Capt. John S. Clark of Co. K, 8th regiment. He was taken sick the last of February and died on the 20th of March, of chronic diarrhea. He kept his tent till two days before his death, when he was removed to the Marine Hospital. Capt. Clark commanded Co. K, from Lunenburg, of the 8th regiment, and leaves a wife and four children in South Reading, where they have been living in the house with her father, Mr. Lewis Robinson, since he went to the seat of war, and who, of course, are overwhelmed with the terrible blow which has come upon them. Mrs. Clark knew he was not well but had so confidently calculated upon his speedy recovery, that the awful stroke found her wholly unprepared. We learn that he was nursed and cared for in his last sickness, by a lady who writes the particulars of his last moments. He was conscious to the last, and sent messages of love to his wife and little ones at home. He said it was hard to die so far away from home, and leave his dear wife and little children, but if it was the will of God, then he was resigned. Capt. Clark has been a most faithful officer while in the army, and on several occasions has been detailed for important special service. His death will carry a deep sorrow and sadness to a large circle of friends. We understand measures have been taken to have his remains brought to Vermont, in which case they will probably be buried at Lunenburg. – We may perhaps give some further particulars of this sad event, but the hour of going to press is at hand, (on account of Fast Day. ) and we must close, and omit some things which would interest many of our readers in Windsor County.