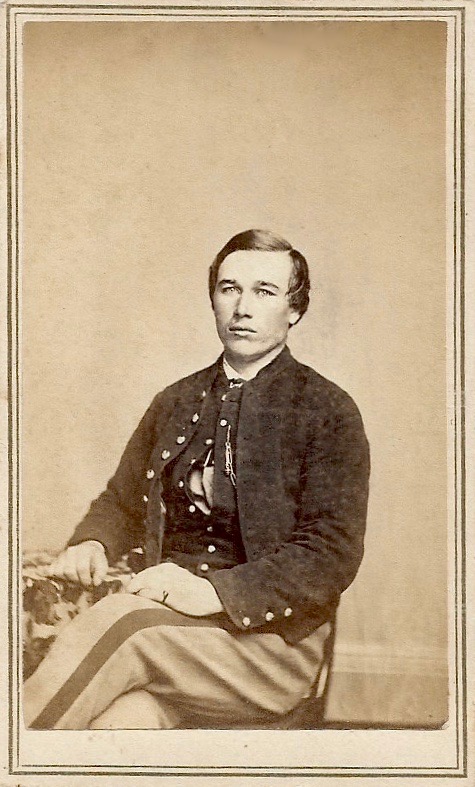 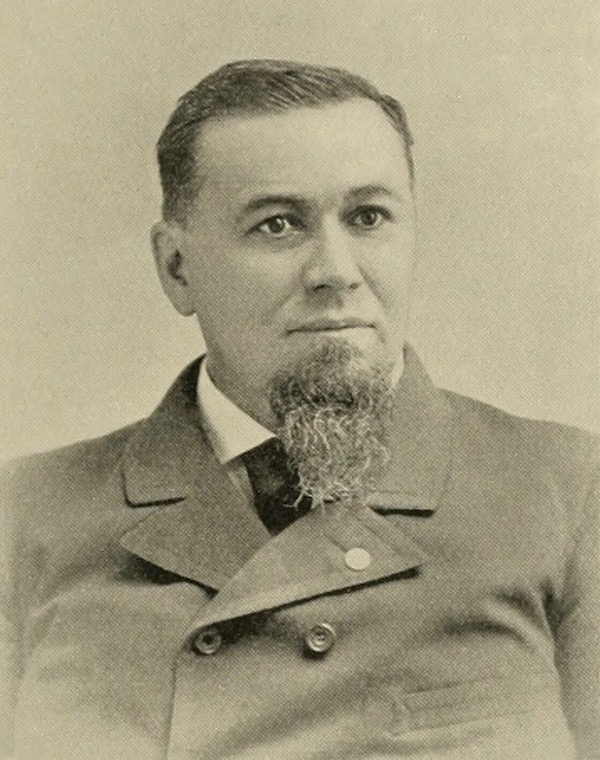 The following contemporary newspaper article details the event, although the units differ from what the citation reads:

BRAVE CONDUCT OF A VERMONT BOY
We have seen a private letter which states that Robert Coffey, Co. K., 4th Vt., at the Battle of Fredericksburg, exhibited conspicuous coolness and bravery. He took two swords, one from a captain and one from a lieutenant, of the 51st N.C. regiment. Alone he captured seven rebel prisoners and took them to the rear. He ordered a rebel Major to surrender, but the Major attempted to escape by running. He soon brought him up standing by charging bayonet, when the rebel tried to shoot him with his revolver, but Coffey was too quick for him, shooting the rebel through the head and killing him instantly. The rebel captain from whom he afterward took the sword, saw Coffey when he thus summarily disposed of the rebel major and called to some of his men to shoot him, and three of them fired, but fortunately missed him. Coffey immediately sprang toward the captain and told him, unless he ordered his men not to shoot he would kill him on the spot. The terrified captain gave the order and directed his lieutenant to come in and surrender himself, which he did bringing five rebels with him, and they all surrendered themselves to Coffey. No Federal soldiers were near Coffey during this encounter, except his 1st Lieutenant, and single handed, he accomplished the brilliant result. The Colonel of the regiment very properly thanked him for his bravery. --- "Freeman"

Coffey, Robert John, of Bennington, was born in the city of St. Johns, N. B., Dec. 15, 1842.
In 1853 he moved to Montpelier and received his education in the common schools of Montpelier and Morristown, living in that town from 1855 to 1859. In the spring of 1860 he attended the academy at Hyde Park one term.
At the breaking out of the war of the rebellion he was living in Montpelier and was one of the first volunteers from that town. He first enlisted in Co. F, 2d Vt. Regt., but receiving a chance to enlist in Co. F, New England Guards of Northfield he enlisted May 3, 1861, for three months and participated in the first important battle of the war at Big Bethel, June 10, 1861. In a few days after his return from the three months' service on Sept. 10 he enlisted for three years in Co. K, 4th Regt., and at the organization of the company he was made 3d sergeant and was always on duty until disabled by a wound Oct. 16, 1863, during which time he was engaged in the battles of Lee's Mills, several day battles in front of Richmond under General McClellan, South Mountain, Antietam, Fredericksburg, Banks Ford, Gettysburg, Funkstown and many skirmishes. At Banks Ford, he captured during the battle two confederate officers and five soldiers for which gallant exploit he has been awarded a medal of honor by Congress. While on picket duty near Centerville, he was badly wounded and disabled for further service and was mustered out at Brattleboro in 1864 with the remnant of the men that left the town three years before over one thousand strong.
In 1867 he was married to Demis Hattie Burnham; by this union they have had one child.
Soon after the war he became engaged in the hotel business; first at Waitsfield, Vt., and then for several years in Montpelier, Richmond and Windsor.
He is a staunch Republican in politics. When the Vermont Soldiers' Home was established in Bennington in 1887 he was the unanimous choice of the trustees for superintendent which position he has filled with satisfaction and credit. In 1873 he joined the G.A.R. and has been an active and prominent member of the order since, holding many offices in post and department. He is at present major and brigade provost marshal on the staff of Gen. Julius J. Estey and has seen nearly fifteen years service in the National Guard of Vermont.
He is a member of Aurora Lodge, No. 22, F. & A.M. of Montpelier and also a member of Mohegan Tribe, No. 6, of Bennington.
Source: Jacob G. Ullery, compiler, Men of Vermont: An Illustrated Biographical History of Vermonters and Sons of Vermont, (Transcript Publishing Company, Brattleboro, VT, 1894), Part II, p. 76.

New York Times
July 10, 1901
Col. Robert J. Coffey, Superintendent of the Soldiers' Home at Bennington, Vt., died at his home there yesterday of apoplexy. He was fifty-nine years of age. Col. Coffey enlisted at the outbreak of the civil war in Company F, Fourth Vermont Regiment and afterward served in Company F, New England Guards of Northfield. He received a medal of honor from Congress for capturing two Confederate offices and five soldiers' at Bank's Ford.
Courtesy of Tom Boudreau 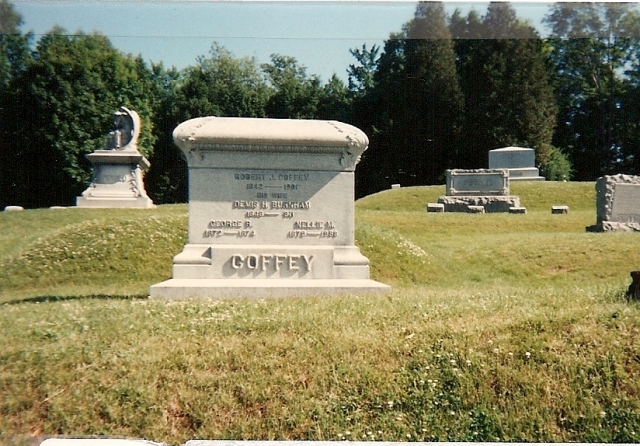