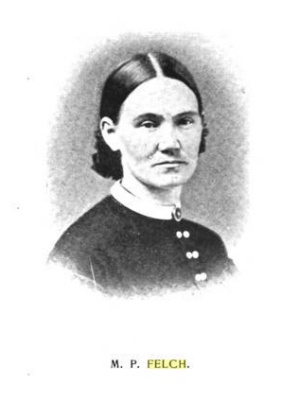 Amanda M. Colburn was born in West Glover, Vermont, November 12, 1833. Her father was a farmer in moderate circumstances and having only one son a share in the outdoor work was often given to the daughter. This early training proved of inestimable value to her in later years when a large reserve of physical strength was so necessary to enable her to endure with comparative ease long marches where hundreds of men were overcome, as during Peninsula, Gettysburg and other campaigns. At about twenty-three years of age she was first married, and it was as Mrs. Farnham that she was so well known in the Army of the Potomac in the summer of 1861. After the war she was married to M. P. Felch. Left alone with her little boy and in poor health she returned to the old home to find the family in great trouble. Henry, her brother, had enlisted in the Third Vermont Regiment, and her parents were in pitiful anxiety for his welfare. The daughter's decision was instantaneous. She left her child with her parents and followed her brother to the front, and enlisted at St. John's July 5, 1861. She was enrolled as a member of the regiment and appointed hospital matron. They were mustered in on July 11th, left the state on the twenty-third, arrived in Charleston on the twenty-sixth and the next day went six miles up the river to Camp Lyon near Chain Bridge. And here began Mrs. Farnham's duty as soldiers' nurse. During the following winter sickness and death from disease assumed such alarming proportions that a special corps of noted physicians was sent for to aid the medical officers then in the field, and with them Mrs. Farnham worked almost constantly. In December, 1861, she was dropped from the pay roll as matron of the third, but she still continued her work, and until the Wilderness campaign in 1864, occupied a different position from any other army nurse. She did not do regular war duty but went from one regiment to another, wherever she was most needed. Day or night, it made no difference, she always responded to the call and would stay until the crisis was passed or death had relieved the patient of his suffering. The day after the battle of Antietam she arrived on the field where everything was confusion and where no supplies were at hand, and immediately went to work among the wounded.

Nothing illustrated better the resourcefulness and clear-headedness of this remarkable woman than the surgical operation which she performed in an emergency here. A soldier had been stricken in the right breast by a partly spent ball with force enough to follow around the body under the skin, stopping just below the shoulder blade. As quick as thought, taking the only implement she had, a pair of sharp buttonhole scissors, and pinching the ball up with the thumb and finger she made an incision and pressed the ball out, thus putting on record through feminine resourcefulness the quickest case of bullet probing on record. Living, directing and always alone on the battlefields she had of course many thrilling adventures. Before a battle it became a common thing for soldiers, especially of the Vermont troops, to intrust her with money or other valuables for safe keeping.

And it so happened that during the battle of Chancellorsville she had an unusual amount of money, which she carried in a belt on her person, with other keepsakes of value in a handbag. After getting into quarters on the Unionists' side of the river she put up a tent, as it was raining, and for the first time in several nights took off the belt and put it with the bag on the ground under the mattress. Perhaps this was all seen in her shadow on the tent cloth by someone watching for that purpose. She had just fallen asleep when she became conscious that someone was trying to get in. The flap-strings had been strongly knotted and tied tightly around the pole so that plan was abandoned and the robber passed around the tent. Fully aroused, Mrs. Farnham now crept from the blankets and finding her revolver awaited results. Her first thought was to give an alarm, but she knew that the thief could easily escape in the dark and return later. He proceeded with his evil errand, cutting a long slit in the tent to reach through. Up to the time when the knife began its work the brave nurse had not realized how serious was her situation; now she hesitated no longer, but aiming as well as she could in the darkness fired. An exclamation, and the sound of hurried footsteps, were all she heard. The next morning news came that one of the new recruits was sick, having been wounded by the "accidental discharge of a pistol in the hands of a chum," and Mrs. Farnham did not ask to have the case investigated. After the battle of Chancellorsville, when the army had to retreat to its old camp, Mrs. Farnham used to keep a horse and team to take along supplies on the march. When in camp the boys could easily procure for themselves what they needed but on the march they often suffered severely. Such articles as shirts, socks, etc., coffee, sugar, condensed milk and canned goods Mrs. Farnham carried in her wagon and gave where most needed.

It is now a simple matter of history that the Sixth Corps marched from Manchester to Gettysburg from daylight until 4 p. m., and it was the greatest feat in marching ever accomplished by any troops under like conditions. Mrs. Farnham went with them most of the way on foot, giving up the spare room on her wagon to worn-out soldiers, who could not find room in the crowded ambulances. She was in Fredericksburg on the ninth of May, 1864, where the weary Union troops were lying, and here for about the first time she was a regular army nurse. Appointed by Miss Dorothea Dix she so remained until discharged in June, 1865. Mrs. Farnham used to tell with quiet humor of her first interview with Miss Dix. From the time she entered the army, Mrs. Farnham had worn a dress similar to that so recently designed for the woman aviator-full pants buttoning from the top of her boots, skirts falling a little below the knees and a jacket with full sleeves. This dress she had on when she called to present her papers of request. Miss Dix glanced at the papers then looked Mrs. Farnham over from head to foot until the situation was becoming embarrassing. Finally she arose, saying: "Mrs. Farnham, the dress you wear is abominable, a most abominable dress, and I do not wish one of my nurses to dress in that manner; but you came highly recommended and I have long known of your work. But I did not know you wore such a dress. However, you can wear it if you choose." Then she wrote the order for Mrs. Farnham to report at Frcdericksburg. From that time until the war closed she was one of Miss Dix's trusted nurses and was charged with duties and commissions at the front that she would trust to no one else. Although they met many times when Mrs. Farnham wore the same dress it was not mentioned again.

Mrs. Logan, above, extracted most of her story from Mary A. Gardner Holland's Our Army Nurses. Interesting Sketches, Addresses, and Photographs Of nearly One Hundred of the Noble Women who Served in Hospitals and on Battlefields during Out Civil War, B. Wilkins & Co., Publishers, Boston, MA, 1895, pp. 282-290, which includes significantly more detail. Holland also gives Amanda's widower, Marshall P. Felch (1834-1902), of Canon City, Colorado, credited for writing the story.

Soon after the war Amanda and Marshall married. In August 1870, Marshall, Amanda, a son Albert, 13, probably Amanda's son from her previous marriage, Sarah, 3, and Edward, 1, were living in Montezuma, Colorado Territory. Albert was a native of Massachusetts; Sarah and Edward were born in Colorado Territory. In 1880, they were living in Fremont, Colorado, with Sarah, 12, Edward, 11, Webster E., 9. In 1900, Marshal, by now a widower again, was living with his single son, Edward (Ned), in Eldred, Colorado. On 3 Mar 1891, she received a pension from the government by special act of Congress (#553504). Amanda died 31 Dec 1893 and is buried with Marshall in the GAR section of Greenwood Pioneer cemetery, Canon City, Colorado.

Amanda is mentioned in an article about the Girls of 1861, and there is a photograph of her on the Colorado Military page of the Rootsweb project. She is also mentioned in an article about the Greenwood Pioneer cemetery. Amanda is erroneously listed as a solider, not a nurse, in Agnes Young, "The Women and the Crisis: Women of the North In the Civil War," (McDowell, New York, 1959).