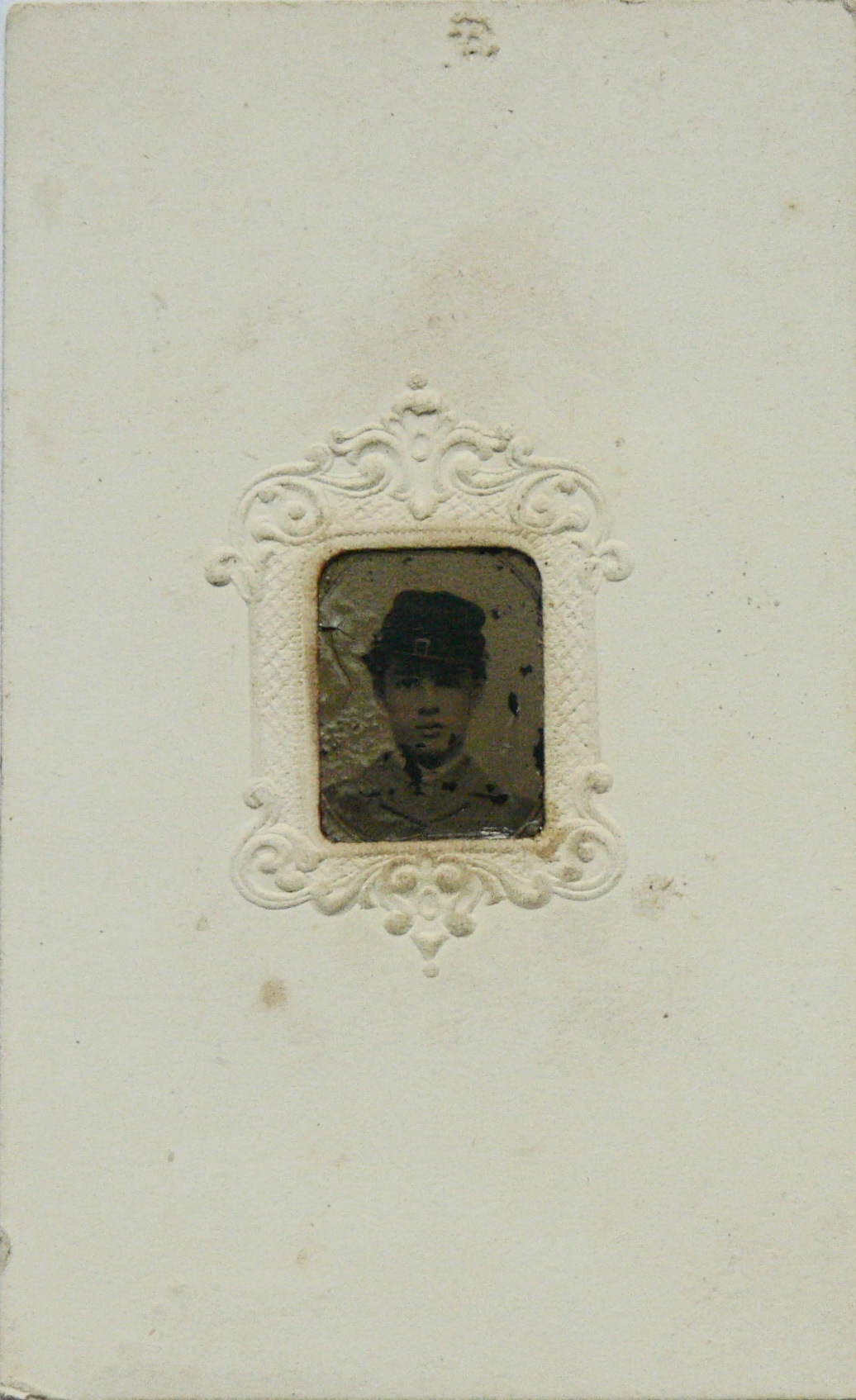 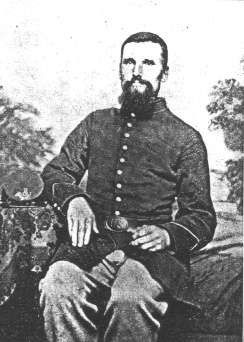 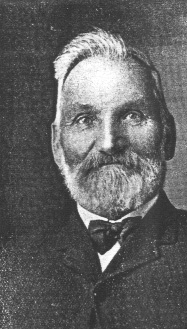 Wartime (1862) and post-war (1906) photographs
Courtesy of his descendants, Elizabeth Bordeaux and Dana Harrington. 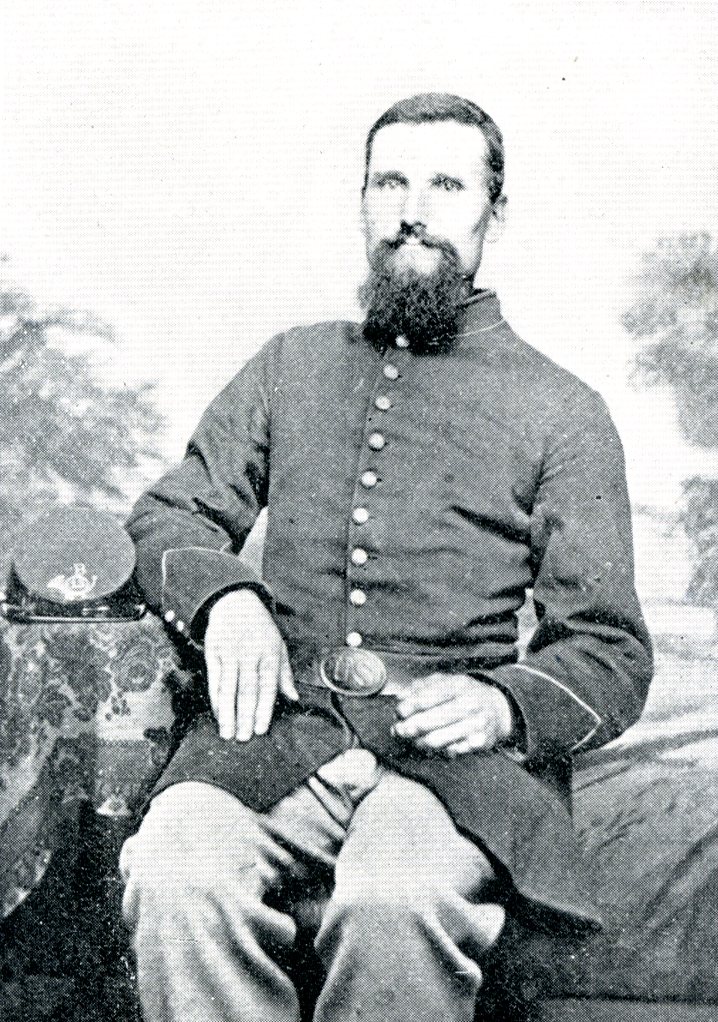 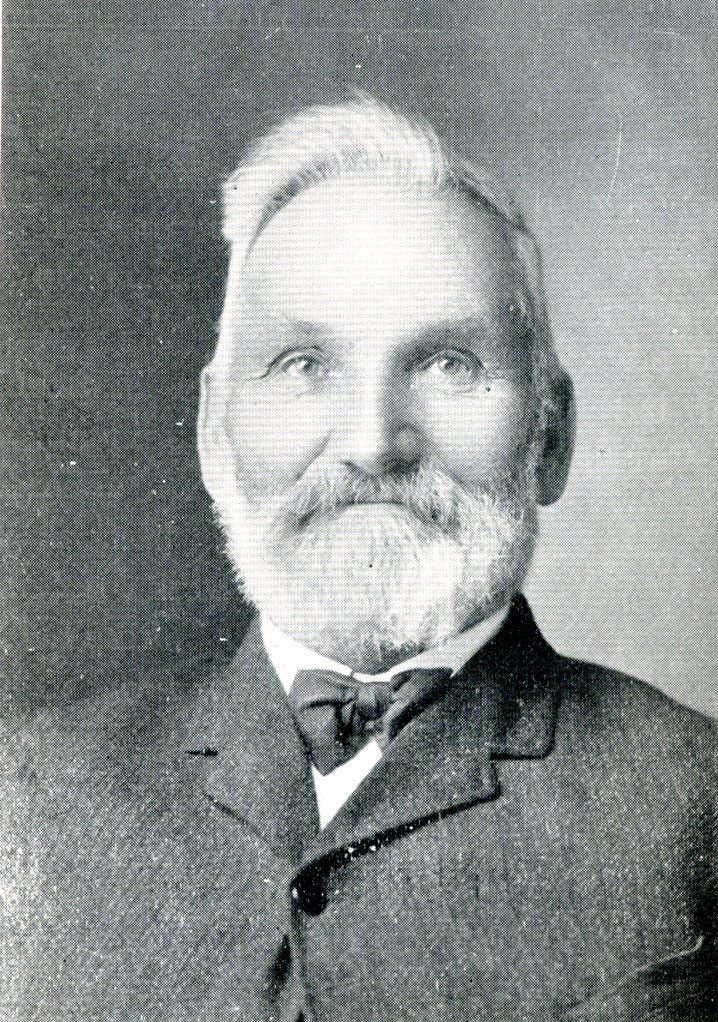 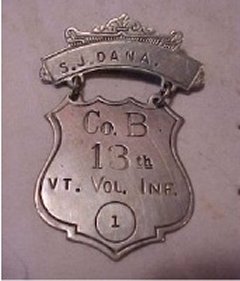 SAMUEL J. DANA was born in Warren, Washington county, Vermont, May 18, 1833. When he was thirteen years of age his parents moved to Fayston, where Mr. Dana still resides. October 5, 1853, he married Adaline W. Benton, of Fayston. They had seven sons six of whom are now living. She died October 24, 1886. On January 10, 1888, Mr. Dana married Mrs. Miranda Davis, who died April 24, 1889. He was married February 27, 1894, to Miss Mary J. Fisher, his present wife. August 25, 1862, he enlisted in the United States service and was mustered in October 10, 1862 as a private of company B, 13th Regiment, Vermont Volunteers. He was with the regiment all through its service except when it left Fairfax Court House. Being sick at the time, he was left In the care of Lieutenant McElroy and Harvey M. Wait until an ambulance was sent for him from Wolf Run Shoals. He was wounded in the left arm by a piece of shell at the battle of Gettysburg, July 3, 1863. At the expiration of his term, Mr. Dana returned to Brattleboro where he was honorably discharged July 21, of the same year. He was one of six brothers who served in the Union Army and came home with honorable discharges. His grandfather served in the War of 1812-1814 and his great-grandfather fought in the War of the Revolution. Mr. Dana represented the town of Fayston in the legislature of 1872-1873 and has held nearly all the town offices, acting as town clerk for 26 years. In company with his son, Henry W. Dana, he has been manufacturer of clapboards and shingles for several years, and is carrying on the business at the present time. He held the office of Assistant Judge of Washington County Court from December, 1902 to December, 1904.

DANA, S. J., Fayston. Manufacturer. Born Warren, May 18, 1833; son of Samuel and Calista (Pastor) Dana. Educated in the public schools. In 1853 married Adeline W. Benton, who died 1886; they had seven children, Plina J., Clarence W., Frea A., Harry C., Henry W., Winfield R., and Charles H. (deceased); in 1888 married Miranda Davis, who died 1889; in 1894 married Mary J. Fisher, who died 1909; in 1910 married Hattie Richardson of Warren. Is an insurance agent; a builder; and a member of the firm of S. J. & H. W. Dana, shingle manufacturers. Enlisted in Co. B, 13th Regiment Vermont Volunteers, September 1862; mustered into service October 1862; was wounded by a shell in the left arm at the battle of Gettysburg, July 3, 1863; mustered out at the expiration of term of service; was one of six brothers who served in the civil war, who all came out with honorable discharge. Is a Republican; was town clerk 27 years; justice of the peace 30 years; has been selectman, town treasurer, lister, school director, town grand juror, overseer of the poor; is now health officer; served as assistant judge of Washington County court two years; represented Fayston in the Legislature 1872.

DIED AT AGE OF 92
Samuel J. Dana of Fayston Was One of Six Brothers in Civil War.

Waitsfield, March 16. - Samuel Jackson Dana passed away suddenly at his home in Fayston Monday morning at 11 o'clock, death being due to heart trouble. His health had been rather feeble all winter.

Mr. Dana was born in Waitsfield May 18, 1833, his parents being Samuel and Calista (Porter) Dana. He was one of a family of seven boys, six of whom were soldiers in the Civil war, all living to come home. Mr. Dana was in Co. B, 13th Vermont.

In spite of his age, his mind was as keen and clear as a man of much younger years. During his life he held nearly every office in the gift of his town. He was town clerk for 26 years, represented his town in the legislature of 1872-73, was assistant judge of Washington county court in 1902-03, has for a large number of years been a representative of the Union Mutual Fore Insurance company, holding the office at the time of his death.

He was married four times. His first wife was Miss Adaline Benton. Her death occurred in 1886. He was married next to Maranda Davis and after her death in 1889 he was married to Mary J. Fisher, who died in 1900.

He is survived by his fourth wife, who was Mrs. Hattie Richardson, and who has given her aged husband most tender care through his last years, also by four sons, Clarence W., of Chelmsford, Winfield, also of Massachusetts, Fred A., of Rochester, N. Y., Henry W., of Waitsfield; nine grandchildren, six great-grandchildren; one brother, Edwin H. Dana of White River Junction.