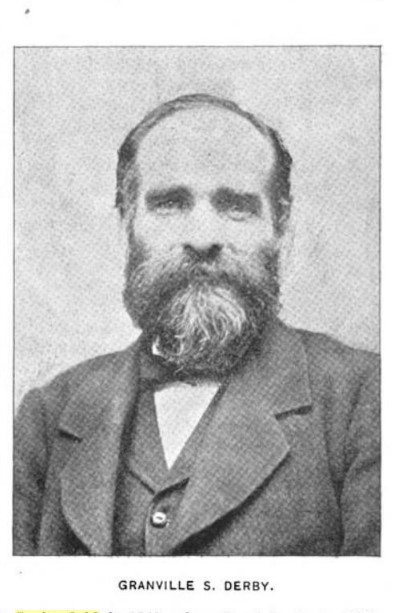 Granville S. Derby, for many years a resident of this town, passed away at the White Plains Hospital, White Plains, N. Y., Sunday, Aug. 22.

Mr. Derby had been in excellent health until last spring when it became necessary to amputate his right leg above the knee, because of poisoning due to hardening of the arteries. He regained his health during the early summer but late in July it became clear that the left leg must also be sacrified (sic). At his request the amputation was deferred until after his 94th birthday, Aug. 19, which he passed pleasantly with his usual good cheer. The operation failed to save his life but enabled him to pass away in comparative freedom from the suffering that he had been enduring for some time.

He met his trials with great courage and fortitude. With a strong faith in the goodness of God he calmly submitted to the ordeals which his condition made necessary and died as he had lived, a Christian gentleman.

Granville S. Derby was born at Nelson, N. H., the son of Samuel and Lucretia (Farwell) Derby, Aug. 19, 1832. In 1840 he came with his parents to Springfield and grew to manhood here, living on what is now the Bishop farm. He attended the public schools here and the old Springfield Wesleyan Seminary. Following his school days he went to Boston and engaged in business in Quincy Market under Fanuel Hall, for a period of two years. While there he cast his first presidential vote for John C. Fremont. From Boston he went to Illinois where he taught school and in the spring of 1858 he went west and took up land near what is now Burlington, Kansas, where he saw some of the struggle to make Kansas a free state. At the outbreak of the Civil war he returned to the east and enlisted Aug. 21, 1862, in the 16th Regiment of Vermont Volunteers, Co. K.

He took an active part in the Battle of Gettysburg and was present at the final charge that meant victory for the northern forces.

He returned to Springfield and lived on the old farm until 1877 when he formed a partnership with the late William H. Cobb. Under the firm name of Cobb and Derby they conducted a mercantile business, which was sold to C.A. Leland & Son in 1882 when they built the grist mill and engaged in the grain business until 1899. He was postmaster of Springfield from 1889 to 1893.

He retired from active business in 1906 and for several years spent his summers here at his residence on Summer street, now the home of Dr. Bugbee and the winters with his sons in Brooklyn, N. Y. Since the death of his wife in 1915 he has made his home with his youngest son, Richard.

He married Mary E. Houghton, May 9, 1867. Mrs. Derby died Feb. 22, 1915. He is survived by his three sons, six grandchildren and two great grandchildren. Mr. Derby's last year was much saddened by the death of his little grandson, the son of Richard Derby. He was a member of the Methodist church and the Jarvis Post, G.A.R.

Mr. Derby possessed a most unusual memory and as long as he lived he retained a keen interest in the affairs of the nation. His active mind and a loveable nature won for him an enviable place in the circle of young people among whom he spent his last years.