DENNIS S. DOW, son of Benjamin and Deborah (Gilman) Dow, was born in Enosburg, Vt., September 18th, 1825, married Harriet E. Dunton, daughter of Hiram E. and Lucy Dunton, in December, 1854. One child was born to them, a son, John E., born January 1st, 1855. He enlisted from Enosburg in September, 1862, becoming a member of Company G, 13th Regiment, Vermont Volunteers. Was discharged in November, 1862, because of Illness. His occupation before enlistment was carpenter and joiner. Since discharge has been a farmer, living in West Enosburg, Vt.

While in Washington a comrade asked a stranger where the office was where they filled out the transportation papers, and was directed to a gambling den. Being in such a hurry to get his made out first, he did not wait for his comrades but entered and made his wants known. One of the men directed him to the right place and wrote something on a paper and told him to present it to the man at the desk with glasses on. Upon reaching the office he did as he had been directed and the man, after reading the paper, laughed very heartily and slapped his knee and then passed the paper to the other men in the room, causing much laughter. As a result they made a mistake in making out the papers which was not discovered until he got to the station and he was obliged to go back again. He knew that he could not return in time for the train so he could not start for home that day. He felt so badly that I pitied him and stayed with him. He then went to the Sanitary Commission and asked if we could stay all night but were refused, so we had to go to the barracks which we found deserted. But as we had no money it was the only place for us two men alone in such a place, unarmed and supperless. During the evening a man entered the building. He was dressed in a long cloak and asked if we had drawn our pay. I spoke up and told him it was none of his business. He replied, "I'll show you." Then my comrade spoke to a bloodhound that had followed us and we had made friends with, and said, "Look after that man, don't take your eyes off him." The man did not stay long after that. About midnight a company of Massachusetts men entered the barracks and I said to the captain, "We claim your protection, we are unarmed men," so he ordered a number of his men to lie down around us while he proceeded to the city with the rest of the men. In the morning the report came to us that one poor devil was dead outside the barracks, robbed and murdered. Died at West Enosburg, Vt., November 14th, 1909, and there buried. His widow and son, J. E. Dow, live in Enosburg, Vt. 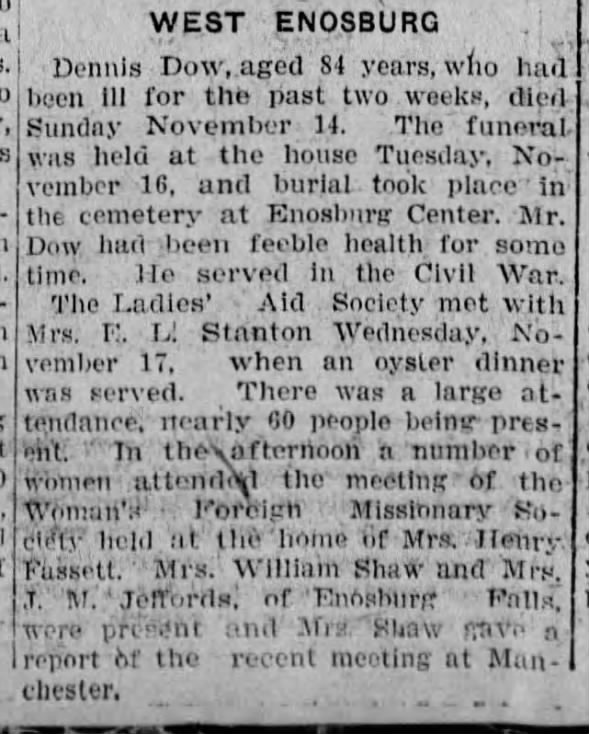