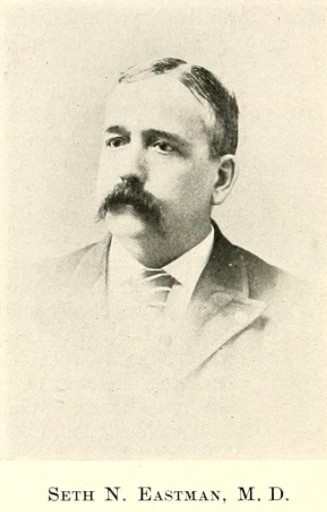 EASTMAN, Dr. Seth K, a native of Topsham, where his father, Bernard Eastman, came as a pioneer settler at the age of 19, was a longtime and respected citizen, and died in 1889 at the age of 81.

Seth N. Eastman was a student of Newbury seminary, but at the age of 17, enlisted, August 1861, in Co. B, Sixth regiment, Vermont Volunteers, Colonel Nathan Lord.

He was badly wounded in the leg at Savage Station, June 29, 1862, laid all night beside the road, and the next day witnessed the advance of Lee's army along the turnpike and a portion of the battle of Malvern Hill. He laid three days on the battlefield before he was picked up by the Confederates and sent to Richmond on a freight car. The wound was never dressed by a surgeon, and he still carries rebel lead in his leg. He was sent to Libby prison, and then to Belle Isle, where after three months he was paroled.

The provisions were barely sufficient to sustain life. In three months he was reduced from 150 pounds to a walking skeleton of 90 pounds of skin and bones. When paroled he was bare-headed and bare foot and wore nothing but a tattered shirt and trousers. Fortunately, at Alexandria he met a squad of Tops- ham men, going to the front, who supplied him with clothing and perhaps saved his life. He rejoined his regiment at Hagerstown, Maryland, in September 1863, and was exchanged six months later.

He was with the old Sixth during the last grand advance on Richmond, including the red deluge of Spottsylvania, Bloody Angle, and the Wilderness. At Spottsylvania, his company came out of the battle with 13 muskets, Co. F with 4, and the regiment with 94.

In 1865 he commenced reading medicine with Dr. George K. Bayley and continued two years, after which he spent a year in the office of Dr. G. H. Plumley of Montpelier. graduating in January 1869. He attended the Eclectic Medical college of Pennsylvania at Philadelphia and Dartmouth Medical college in 1884. He located in

Groton soon after and has remained in practice here ever since. Dr. Eastman is a member of the White Mountain Medical Society and the United States examining board for pensions.

In 1875 Dr. Eastman was united in marriage to Evalona, daughter of Hon. Jonathan R. and Sarah M. (Taisey) Darling, a lady of refinement and rare worth. Two sons were born to them, Cyrus D., born October 2, 1877, and Bernard S., born June 20, 1880. Cyrus D. graduated from the Montpelier seminary in 1896 and manifested unusual taste and ability as a writer and a particularly bright career seemed to be open to him within tubercular consumption appeared and after a few months in sanatoriums in Colorado and New Mexico he succumbed February 2, 1900.

Bernard S. secured his education in the schools of Groton and at Montpelier seminary and is a clerk in Judge Darling's general store at Groton.

From the last illness of Cyrus D. Eastman his mother seemed to lose courage and strength and gradually the mother love yearning for the firstborn gave way and on June 16, 1903, she passed away, surrounded by loving and tender ones to join him who had so recently gone before. Mrs. Eastman was a particularly bright, kind, and likable woman, who from environment had come to be recognized as a leading spirit in the community; for several years she was a devoted and capable teacher in the schools of Groton and at the time of her death had been a consistent and working member of the Methodist church.

Dr. Eastman is a member of Colonel Preston post. No. 64, G. A. R., and was a member of Sher man lodge, No. 72, F. and A. M. of Topsham. He has been selectman, was nine years superintendent of schools, and as a Democrat represented Groton in 1890 in the legislature.

Dr. Seth N. Eastman died at his home in the village Monday forenoon after a few days' illness from heart trouble although he had been failing perceptibly in health during the winter months. The funeral will be held Thursday afternoon at 1 o'clock from the Methodist church. Dr. Eastman was born in Topsham and passed his seventieth birthday in August of last year. He was the son of Bernard and Hannah Wood Eastman. He served in the Civil War and soon after its close he came to Groton and commenced the practice of medicine. He has since resided here but gave up active work a number of years ago. He married Evalona Darling, only daughter of Judge and Mrs. J. R. Darling, who died eleven years ago last June. He is survived by one son, B. S. Eastman of Groton, dealer in general merchandise, and two grandsons, Cyrus and Seth. An older son, Cyrus, a promising young man of twenty-three years, died about thirteen years ago. One sister, Mrs. Horace White of Topsham, also survives the deceased. Dr. Eastman held several important town offices and represented the town in the legislature about twenty-five years ago, He also served on the board of examiners for pension claimants for many years, holding that office at the time of his death.