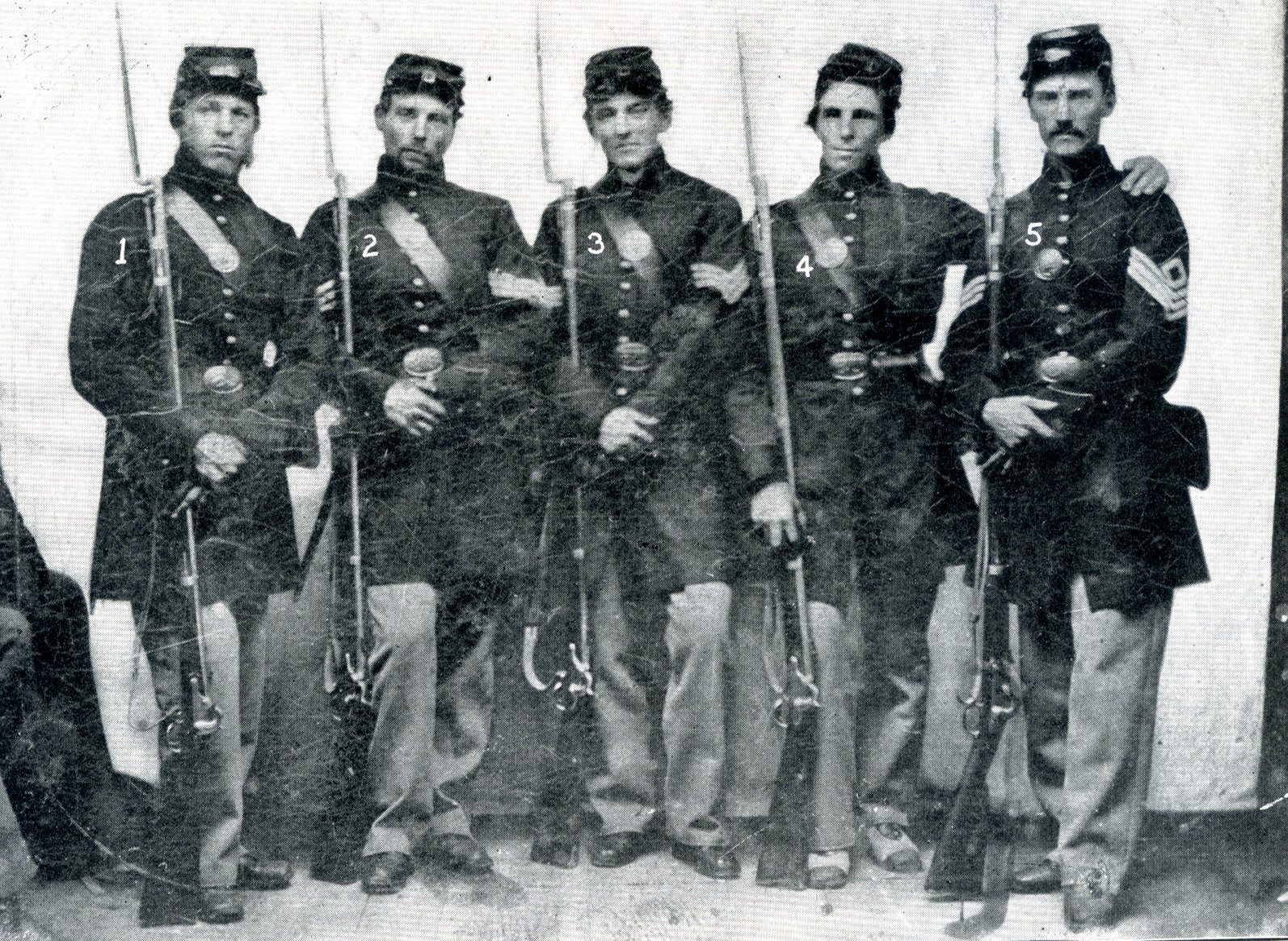 J. F. DENSMORE. Among the killed or fatally wounded in Company D at Gettysburg, was Sergeant Julius P. Densmore. No better man served in the company than he, nor any that were more universally esteemed. He was a fine physique of about 170 pounds, rugged and healthy, abounding always in good nature and of a uniform sunny temperament. His age was about twenty-five. His intercourse with all the members of the company was most friendly and companionable, but especially so with Captain Munson and Lieutenant Rolfe in whose neighborhood he was raised and with whom his youth and early man- hood were spent.

With the exception of an accident before Gettysburg was reached his service was in no way different from others. This accident in which he nearly lost his life was the accidental discharge of a revolver in the hands of Captain Basconi at Camp Carusi, Va. The ball took effect near the top of his forehead and ploughed a furrow across the head under the scalp. The wound under the skill of Surgeon Nichols soon healed and Densmore was able to march to Gettysburg with the regiment where he was destined to receive another wound of a more serious character. In the afternoon of the third day of the battle while the regiment was moving in the execution of the order "change front forward on first company". Sergeant Densmore fell forward on his face. The writer saw Lieutenant Hibbard raise him sufficiently to see who had fallen and heard him say "poor Jule" and we passed on. After the repulse of the enemy at this point he was seen to have raised himself to a sitting posture and leave was granted at once to remove him from the field. His wound was a shattered skull by a fragment of an exploded shell. He was able after a few days to be taken home to his parents in Colchester, Vt., where he died August 31st, 1863.

His funeral was attended by most of the members of Company D. An impressive service was conducted by his pastor. Rev. Samuel Whiting and his remains were borne to the grave by his comrades with sincere grief. And now each year as we place flag and flowers on his grave he appears in our memory as we knew him in his rugged man- hood and we say "poor Jule."

Sergeant Densmore was struck by a piece of a shell just above the forehead, the flying missile inflicting a deep wound and breaking the skull, but having an iron constitution he was enabled to reach his home, where he was attacked by fever, which rapidly wasted him away and aggravated the wound which at last caused his death. He was shot on the last day of the battle as the Regiment was moving down the hill to repel the grand charge made by Longstreet's division on the left center of our line of battle.

Sergeant Densmore was one of those fellows that entered the service of his country leaving his parents with a large family farm to attend to in his absence, but still considering it his duty to assist in crushing out the cursed rebellion, and many hundreds of like men have been sacrifice on the alter of our country. At home he was a kind and obedient son, a faithful and tried friend. As a soldier he was prompt and energetic, always ready for any duty imposed upon him and strictly obedient to orders. On the battlefield he fought with the nerve and steadiness of a veteran, until he was carried wounded and bleeding to the rear. During his sickness at home we are assured he experienced that change of heart which enabled him to meet death joyfully and without fear. His funeral was attended and his remains followed to their last resting place by his bereaved relatives, and hosts of warm friends, among whom were over half the company of which he was a member, with whom he was always popular and companionable. All felt that we had indeed suffered the loss of one of our best young men. But we are called upon to make such sacrifices, and there must be no hesitancy now. The best blood of the North must and will be freely shed until the glorious old flag floats again over every State in our Union, which God helping will be soon.