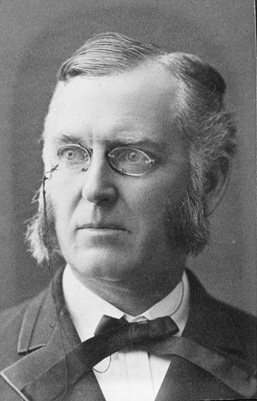 James McMillan Ayer was born in Danville (Caledonia County) Vermont, 6 Nov., 1839, son of Royal and Abigail (McMillan) Ayer. His father was an eminent, well-loved physician in Danville. James attended the district schools in his native town.

He fitted for college at Danville Academy. He went on to Dartmouth College where he graduated with the Class of 1860. After graduation he taught school, first at Swanton Vermont during the winter term of 1860. From 1861-1862, he was employed at Danville Academy as a teacher. When the Civil War broke out James enlisted at the age of 22 years from Danville, 25 Aug., 1862 in Company "B" of the 15th Vt. Regiment. He was mustered in as Captain 8 Sept., 1862. He mustered out 5 Aug., 1863. When he arrived home in Danville he was a skeleton of his former self, but his mother nursed him back to health. In June, 1865, James took the position as cadet in the Military Hospital at Fort Schuyler, New York Harbor. In October, 1865, Ayer resumed the study of medicine at the College of Physicians and Surgeons in New York City. He graduated from that institution with his M.D. in 1866 and went to work as the assistant physician at St. Luke's Hospital in New York City.

James Ayer m. in New York City, 31 Oct., 1867, Anna Winchester Dana (b. Fryeburg, Maine, 20 Aug., 1844, dau. of Hon. John Winchester & Eliza Ann (Osgood) Dana of Rosario, Brazil, South America). Anna's father was a merchant and diplomat by occupation. John Dana was elected to the House of Representatives and later the Senate of the state of Maine. He served as Governor of the state of Maine, 1847-1850.

He was appointed Minister to Bolivia and served from 1852-1860. Mr. Dana's wife contacted cholera and died in Bolivia 14 Dec., 1863. John Dana died of the same disease three years later in South America.

James and Anna moved to Buenos Ayers to look after Anna's interests and stayed there for a time while James regained his health which had been severely compromised while he was a Civil War soldier. They operated her father's sheep farm in Rosario for some time, raising sheep and living on their farm in the mountains. James also practiced medicine in Brazil. Dr. Ayer's health, fragile for quite some time, was growing worse. This convinced the family to come back to the United States.

3. Harold Osgood Ayer, b. 9 July, 1877. He m. 23 April, 1912, Harriot G. Pillsbury of Minneapolis, Minnesota. He was a graduate of the Massachusetts Institute of Technology in 1899. He was a chemist by profession. They moved to Savannah, Georgia

Dr. James M. Ayer, who died at his home in Danville on Tuesday from a sudden attack of heart disease, was the only son of Dr. Royal M. Ayer, and was born in Danville in 1840. After graduating from Dartmouth in 1860 he was elected captain of Co. B, 15th regiment, Vt. Vols., in September, 1862. He was mustered out after one year of service and immediately entered the New York college of physicians and surgeons, from which he graduated in 1865. After being engaged one year as resident physician in St. Luke's hospital, New York, Dr. Ayer went to Buenos Ayres, South America, where he resided in general practice until 1880. He then returned to his native town, and until his death, made it his summer home, going to Washington to spend his winters.