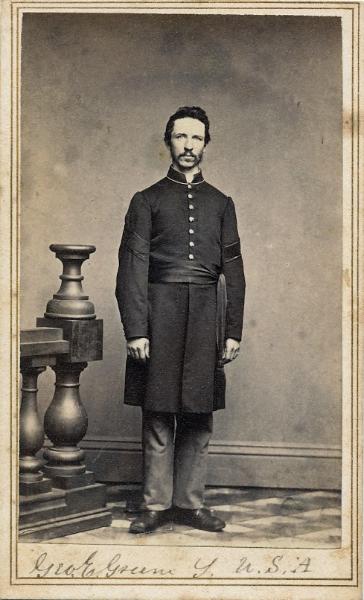 St. Albans Daily Messenger
Feb. 20, 1908
Well Known Brattleboro Man Dead
George E. Greene, aged 77 years, who was chief hospital steward in the United States hospital at Brattleboro in the Civil War, and who had been a druggist in Brattleboro since 1865, died Tuesday night, February 11.
Mr. Greene was born in Lebanon, N.H., August 5, 1830, the son of Amos and Hepsibah (Hoffman) Greene. When a young man he was superintendent of a woolen mill in East Bethel. He married Bessie M. Paul of that town in 1856. One son, the late Louis D. Greene, was born to them and a few months later Mrs. Greene died.
Following the death of his wife, Mr. Greene went to Brattleboro and began studying medicine. He enlisted in Co. I, 16th Vt. Vols., October 9, 1862, expecting to go to the front, but having some knowledge of the care of the sick, Dr. E. H. Phelps, who was the surgeon in charge of the military hospital at Brattleboro, secured his discharge from the volunteer army and he was hospital steward from February 17, 1863 to September 11, 1865, and made frequent trips to New York to accompany sick and wounded soldiers to Brattleboro.
In 1865 he formed a partnership with the late I.N. Thorn in the drug business and in 1878 he opened the store in the Herrick & Wyman building which he had conducted ever since. He married Addie Esther Root, of that town, February 13, 1865, and they had one son who died in 1880. Besides his wife, Mr. Greene leaves two sisters, Mrs. Mary Colby and Mrs. Eliza Bancroft, of East Calais, and an adopted daughter, Mrs. C.R. Aldrich of Brattleboro.
Mr. Greene was a director of the People's National bank, a trustee of the Vermont Savings Bank, president of the Prospect Hill Cemetery Association, a Mason, Odd Fellow, of Sedgwick Post, G.A.R., the Congregational church, the Board of Trade, and was an ex-president of the Vermont Pharmaceutical Association.