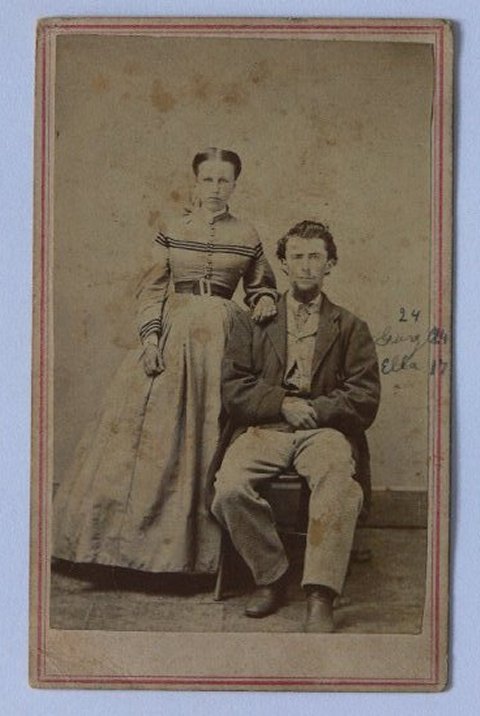 At their home on River street Friday, March 9, Mr. and Mrs. George D. Hackett observed their golden wedding anniversary . There was a family dinner party and following this the day was passed in visiting among friends and relatives. Letters and cards were received from absent friends. Mr. and Mrs. Hackett were presented with gold watches, the gifts of their children as follows: Bert of Providence, R. I., Lyle of Windsor and Mrs. Leon Gregg of Weathersfield. Four of the six grandchildren were present at the event. One daughter of Mr. and Mrs. Hackett, Jennie Hackett Allard, died at the age of 27.

Mr. and Mrs. Hackett were married at Strafford, Vt., March 9, 1867. Her maiden name was Ella Pearsons and her father, Leonard Pearsons, is now living at East Randolph, Vt., at the age of 90. He was not able to be present.

Mr. Hackett is a Civil war veteran, having served with the third Vermont battery in that conflict.

George D. Hackett passed away at his late home in Windsor, Wednesday, March 1, after a short illness. February 18 he was stricken with a shock and the following Monday with the second, from which he steadily failed until the end.

He was born in Strafford, Vt., January 9, 1843, a son of Moses and Mary Hackett, with whom he lived until the fall of 1861, when he enlisted in the War of the Rebellion, serving with the 3rd Vermont Battery Light Artillery in several battles.

The greater part of his life he spent as a farmer in Stockbridge, Sherburne and Weathersfield.

In 1909 he moved to Windsor, living there until his death.

Mr. Hackett was well known and enjoyed a host of friends. Besides a wife, he leaves a daughter, two sons and three sisters to mourn his loss. If he had lived until January 9 he would have observed his 55th wedding anniversary.