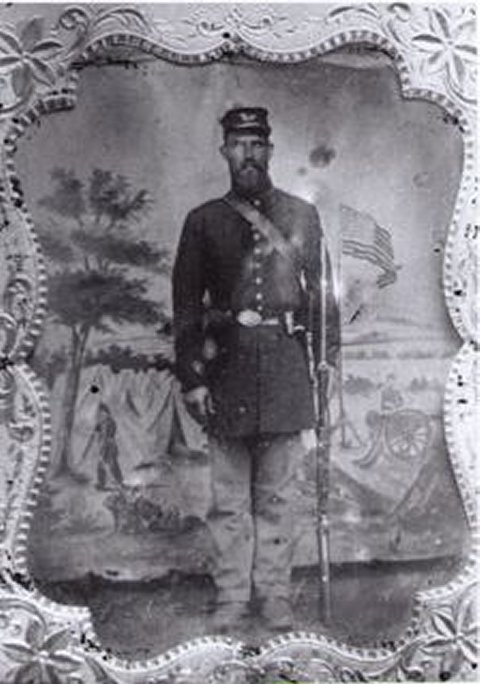 Ephraim Peleg Hill was born 26 April 1833, in Greensboro, Vermont, the son of Aaron and Susan (Ellis) Hill. He enlisted 3 September 1862, and mustered in as a private in Co. I, 15th Vermont Volunteer Infantry, on 22 October 1862. He mustered out with his regiment on 5 August 1863, in Brattleboro. Ephraim died 24 December 1913, and is buried in the Village Cemetery, in Greensboro. His brother, Samuel Hill, served in the same company.

The history of the Hill family of Greensboro indicates Ephraim was involved in guarding a prisoner train north from Gettysburg after the battle.

"1861 to 1865 - Over 100 leave for Civil War, including Samuel Hill and Ephraim Peleg Hill, who were both at Gettysburg. Sam was an ambulance driver, and Eph guarded prisoners of war on a train north. 35 Greensboro men died in action or from disease, 7 in the Confederate prison in Andersonville, GA."

E. P. Hill passed away Wednesday morning after a long illness and was buried Friday. Mr. Hill was about 80 years of age and a veteran of the civil war. He leaves a wife and two sons.