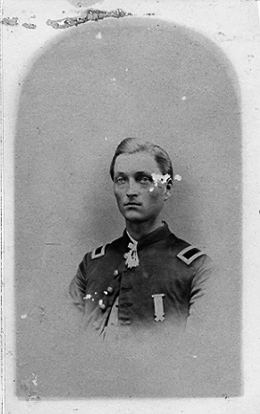 It is not the purport of this Chapter to make record of the many soldiers who from time to time since the close of the War have been connected with the Church or School, it being a record of those who represented us during 1861-1865 as soldiers or sailors in defense of the flag. There have come among us, however, since those years, a few who have given of their strength, means, and influence, and have by the suffrages of the membership of the Church been exalted to office, who bear honorable record of service. The writer, therefore, wishes to make Honorable Mention of Deacon Samuel H. Holbrook, with a brief sketches of his service.

Deacon SAMUEL H. HOLBROOK—elected Deacon Jan. 5, 1885, and served until removing to Newport, Vt., July 15, 1887—was a member of Company " F," 11th Regiment Vermont Infantry, enlisting as private and being advanced to Lieutenant commanding Company. Was with his regiment during the entire service from August 11, 1862, until August 25, 1865, at close of War, with the exception of a furlough of twenty days. Was in all the engagements in which the regiment participated, and was wounded at battle of Cold Harbor, June 1, 1864, and Siege of Petersburg, April 2, 1865. In the battle of Cedar Creek (where Lt. Lyman James fell) every non-commissioned officer in his Company was either killed or wounded and every commissioned officer was a prisoner or in hospital. Holbrook was made Corporal and put in command of his Company. Soon after was made Orderly Sergeant and on August 2, 1865, commanded his Company in the assault on the fortifications at Petersburg, in which every man in his Company was either killed or wounded. Dea. Holbrook is, at present writing, a resident of Newport, Vt.

Samuel H. Holbrook, for many years a resident of Newport, passed away at the home of his son in Newark on Thursday, June 19, aged 69 years, 11 months and 29 days. The decedent was born in Newport June 20, 1843 on the farm where he has lived for so long. His parents were Dudley Holbrook and Sarah (Towle) Holbrook. In early life Mr. Holbrook moved to Boston where he entered into the express business with two of his brothers. He afterwards conducted a grocery and provision store in East Boston for many years. His health giving out, he with his family, moved to Newport in 1887, to the old home farm on the Lake road, and this was his home until a short time before his death. Early in life he joined the Maverick Congregational church in East Boston, and was long a devoted member of this church. Upon coming to Newport he united with the first Congregational church there and was ever a constant attendant and faithful member. He was a devout Christian and lived so that his life was a constant example to those surrounding him.

In 1861 he responded to his country's call to arms and served through the war, being mustered out as a Lieutenant of company F, 11th Vt. Vols.

On March 30, 1870, the decedent married Caroline D. Smith, and to this union were born seven children, four sons and three daughters, all of whom, with the widow survive him, except one daughter who died in infancy.

The funeral services were held at the Congregational church in Newport on Monday afternoon at 2 o'clock, Rev. Edwards officiating, and the interment was in the Lake road cemetery.

Mr. Holbrook had rented a house in Barton and was about to move there. Mrs. R.E. Davis of Glover is a daughter and Miss Lucia Holbrook, at one time a teacher here, is also a daughter. He leaves other children, one an editor in Illinois.