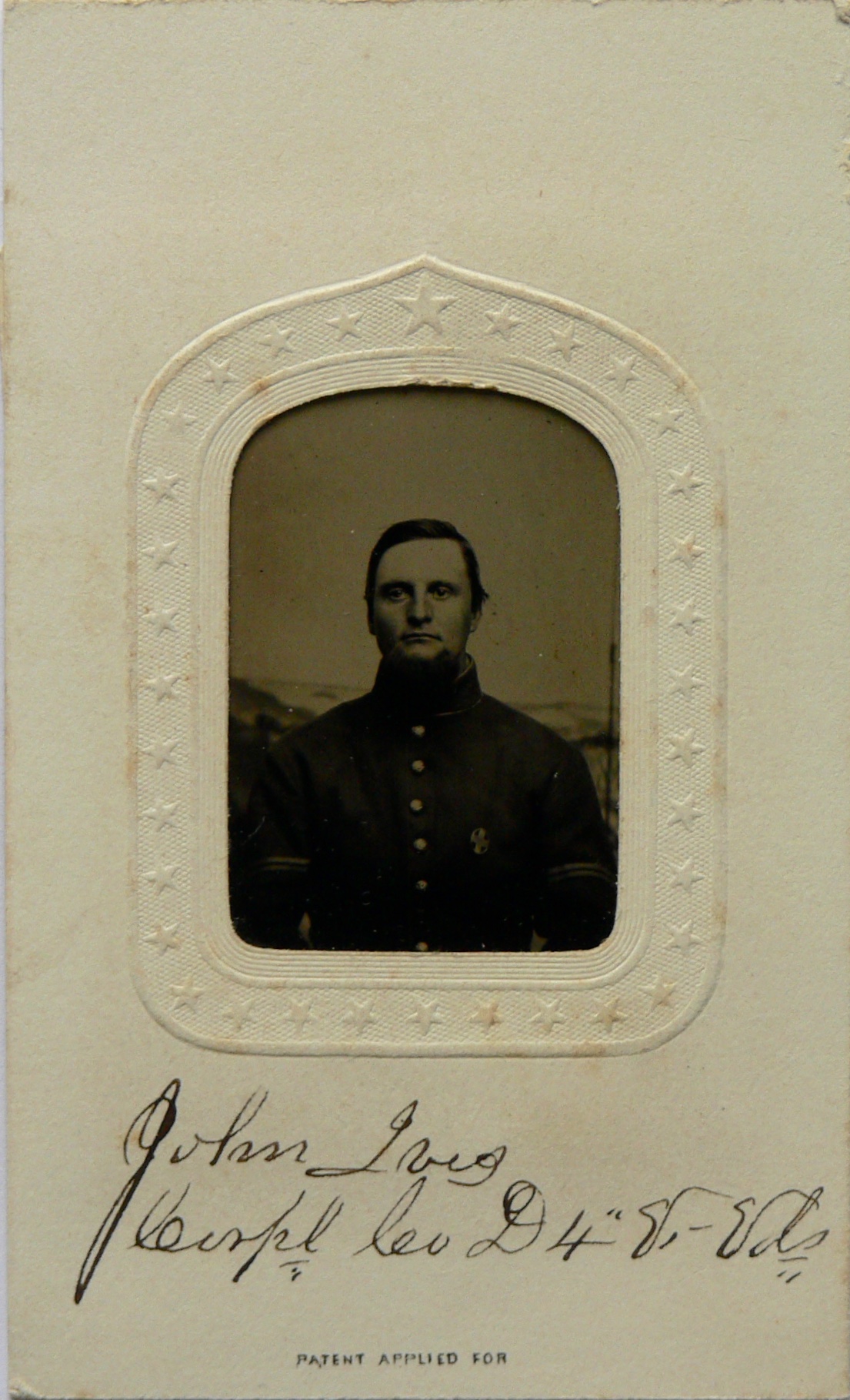 John Ives, incorrectly listed as Ivers in the Revised Roster, was born in 1838 near Cambridge, VT. In 1861, he enlisted as a private, Co. D, 4th Vermont Inf. The 4th Vermont was formed on September 21, 1861 and was brigaded with 4 other Vermont regiments to form the famous "Vermont Brigade", which was assigned to the VI Corps, Army of the Potomac. John was present with his regiment at Fredericksburg and Antietam. The VI Corps arrived at Gettysburg in the late afternoon of the 2nd day, replaced the V Corps as the army's reserve, and was not committed to combat. The regiment saw its hardest fighting at the Wilderness (May 5-7, 1864) and Spotsylvania Court House (May 8-21, 1864). The Vermont Brigade lost 1,645 killed, wounded, and missing in this 16 day period, of 2,800 who began the campaign. One of the casualties was Private Ives, who was wounded in the left leg at Spotsylvania. He recovered, returned to the regiment, and fought in the Petersburg-Appommatox campaign. He is also recorded as having suffered a second wound when a bullet grazed his head during fighting in the Shenandoah Valley.

Following Lee's surrender, the 4th Vermont marched in the Grand Review in Washington before mustering out. John Ives survived the war, and moved to Minnesota, where he lived for the rest of his life. According to them, he originally enlisted in the Co. D, 4th VT Regiment on August 21, 1861 at either Barton, VT (1884 papers sent & written by gov't official, also muster rolls etc.). Burlington and Brattleboro are also mentioned in these papers as possible enlistment sites. He was discharged on July 17, 1865 at Burlington, VT with the rank of Corporal. All of his military papers give his middle initial as R., where mentioned. That is the only proof I have of middle initial. His birthdate is also a ?. On military papers, he states that he was 22 at time of enlistment. The dates I have are 1838, military papers, 01-23-1837 - pension papers, 01-23-1834 - death certificate, 01-22-1839 - pension papers filled out by daughter, and 01-23-1838 in his obituary. The obituary and military papers, as well as death certificate, all state that he was born near Cambridge, VT. Craftsbury Vermont is also mentioned in one of them. He married Lucy Ann Alger on 01-11-1873 in Winona County. I have the actual marriage certificate to verify that, but there were several other dates given on pension papers etc., regarding that as well. He and Lucy had 11 children:

All of these children were born in Winona County, MN. According to his obituary, he was one of Winona County's oldest Civil war veterans and had been a resident of Winona County for more than 50 years when he died on 08-06-1920. It states that he was born near Cambridge, VT in 1838 and worked on his father's farm and attended school in the winter time until he grew to manhood. He spent several years working on other farms in the neighborhood and near Hyde Park and Kansburg, NY. He enlisted in 1861 and was in a number of famous battles such as Fredericksburg, Spotsylvania, Gettysburg, The Wilderness, Petersburg, and Shenandoah Valley. He was severely wounded in his left leg at Spotsylvania and his leg had to be amputated later. He also had other wounds during the war, including being shot along the side of his head at Shenandoah.

He came to Winona shortly after the war and secured work on a farm near Ridgeway, MN. After marrying, he rented a farm which he operated for over 20 years. They later moved to Wiscoy Township, Winona County, MN and resided there until moving to the city of Winona, MN. He was a member of the G.A.R. and had been active until handicapped by old age. One interesting thing to mention is that his physical description from his military papers state that he had brown eyes, black hair, dark complexion, and was 5'6" tall.