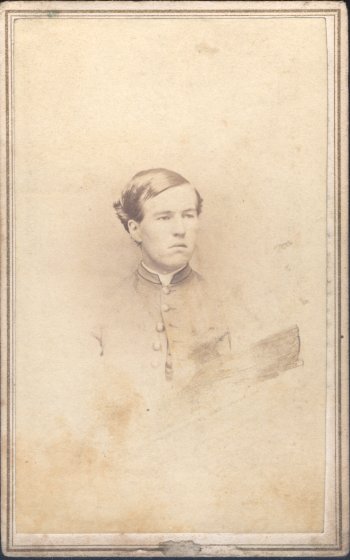 Charles Needham Lapham, the second son, and second of six children of Solon and Elizabeth (Frost) Lapham, was born 22 May 1845, in Bridport, Vermont. Nothing is yet known about his early life, but his father was a farmer and a Morgan horse breeder, so it is safe to assume he grew up working on the farm for his father.

After the battle of Gettsyburg, early on 8 July, 1863, Confederate Cavalry General J.E.B. Stuart moved from Hagerstown in order to get possession of Boonsboro Gap, and close the pass to Meade's army, following after Lee's fleeing army. The First Vermont Cavalry was initially held in reserve, but after noon, the third battalion, under Major Bennett, (companies L, F, K and M), was sent to the right and front of the Hagerstown road, where the men suffered seriously from the enemy's batteries. The regiment suffered two killed, eight wounded and five missing. Among those wounded was Corporal Lapham, who was struck by a cannon ball which essentially carried away the majority of both his legs. 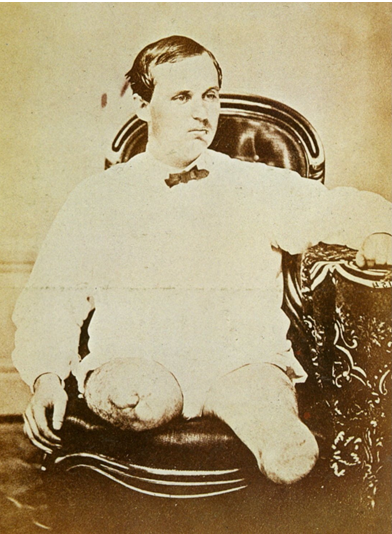 Corporal Lapham was taken to the field hospital at Boonsboro where his wounds were bandaged while he awaited the surgeons help. On July 10 Surgeon L.P. Woods of the 5th NY Cavalry performed amputations of both Corporal Lapham's legs. The right leg had to be amputated above the knee, since the knee joint was shattered. The left leg, Surgeon Woods was able to preserve a bit more of, being amputated at the knee joint.

After a period of recuperation, he was transferred to the General Hospital at Burlington, Vermont. Four months after receipt of his wounds he was discharged home. There he was depended on friends and family to nurse him, and provide for him. A year later, in May of 1864 he was taken to New York City where the government paid to have artificial limbs constructed for him. Dr. E.D. Hudson saw him that month and noted "The right stump is healed and in good condition, though the supporting cicatrix (scar) at the base is not good. Regarding the left stump - this forms the most useful, reliable and comfortable support [for him] and constitutes his chief dependence..". 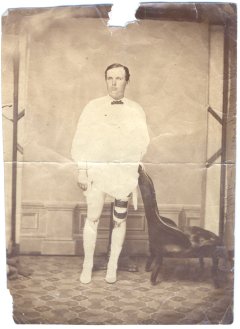 After being fitted for artificial limbs Lapham returned to Baxter Hospital and was eventually discharged and pensioned by the government on August 25, 1864.

The story of Corporal Lapham is a "happy one" in that it shows the man's spirit and persistence. Five months after his discharge from Baxter Hospital he enrolled in the Collegiate Institute in Poughkeepsie, New York. While there he found time to write to doctor who helped him regain some "normalcy" in his life - Dr. Hudson - who had made his "new legs." He wrote..."I can walk with ease on level ground, get up and down stairs readily and am getting along much better than I anticipated in so short a time."

Lapham finished his schooling and became a clerk in the US Treasury Department in Washington, D.C.

Charles married Sylvia Anna Mead, daughter of Abner Mead, of Bridport, on 22 March 1874. The Mead farm was adjoining the Lapham farm, and the family speculates, since she was four years older than he, she may have helped nurse him back to health prior to his departure for schooling. From at least 1880, until his death, they lived at 1737 Pennsylvania Avenue.

On 31 October, 1891, the Registrar's Office reported: "during the fiscal year, this divsion lost, by death, one of its most valuable fourth-class clerks, Dr. William Guliford, and subsequently, on September 3, suffered a further and similar loss in the decease of Charles N. Lapham..." (Report of the Secretary of the Treasury, 1891) 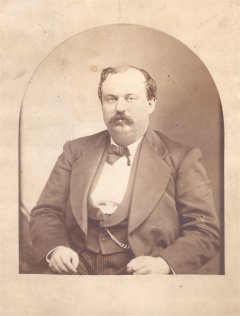 Death of a Veteran - The Boonsboro Times records the death of Charles N. Lapham, a clerk in the office of the Registrar of the Treasury at Washington, on Thursday September 3. This gentleman, the Times says, was a native of Vermont, and during the war, a member of the First Vermont cavalry. He had both legs shot off near Boonsboro, and was removed from the hospital to the residence of Miss Nancy Stotler, where his wants were attended to by willing hands. Deceased was forty-eight years of age and leaves a widow and daughter.

The funeral was held at the residence on 1737 Pennsylvania Avenue, and Corporal Lapham was buried in Arlington National Cemetery.

(Photographs of Charles Lapham courtesy of Ann Anderson, his great granddaughter; additional material as referenced above) 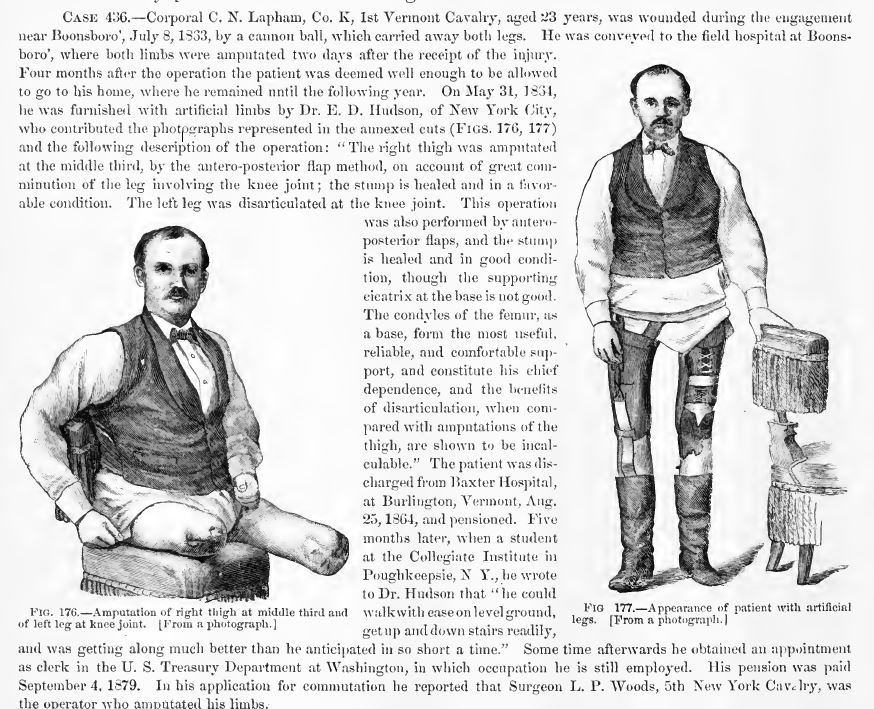 Medical and Surgical History of the War of the Rebellion 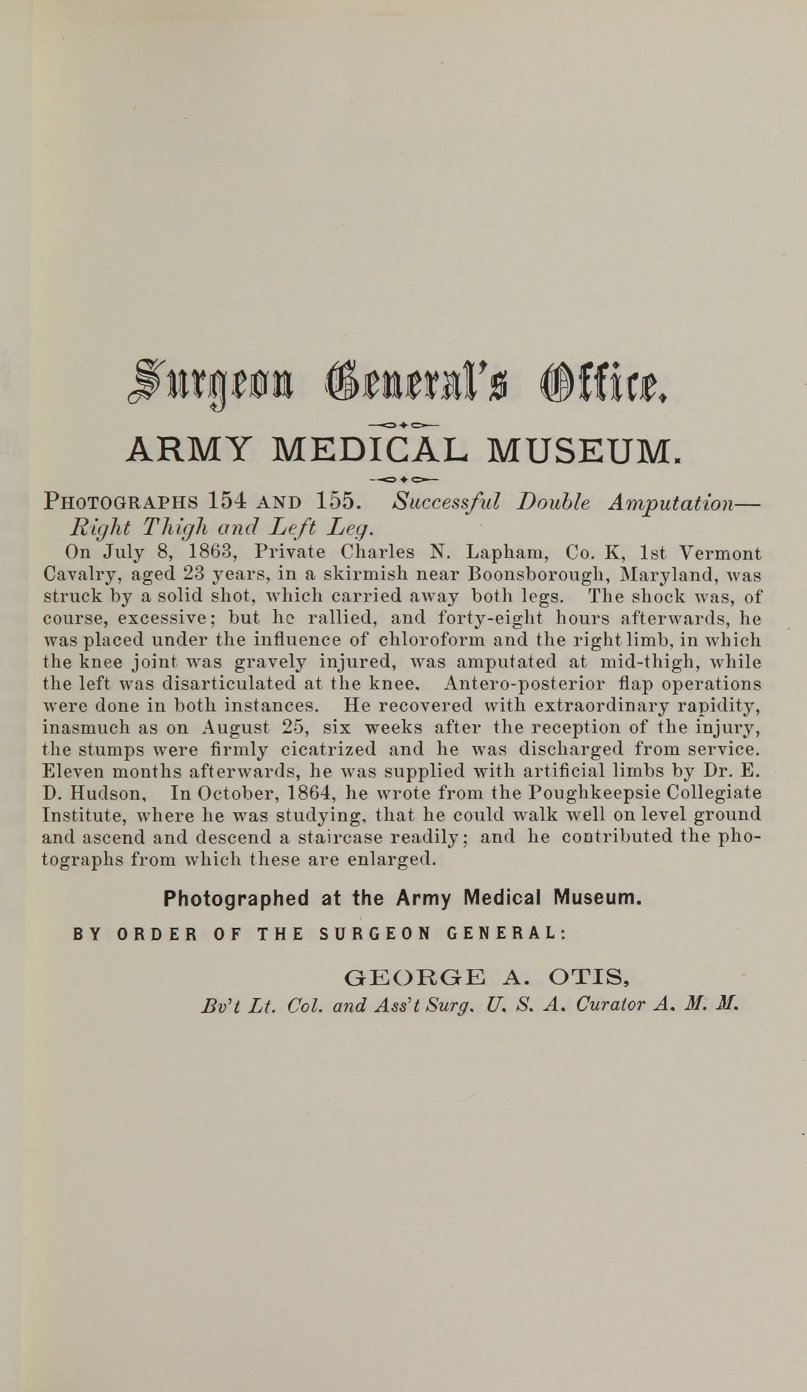