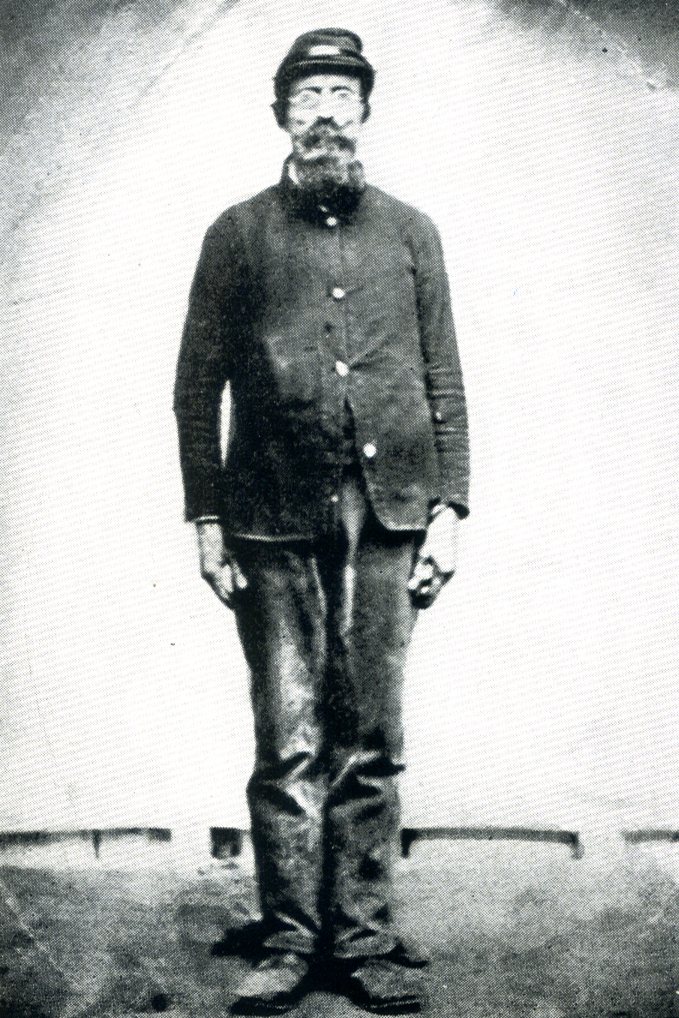 AURA LYFORD volunteered from the town of Woodbury, Vt., September 8th, 1862 at the age of 47, and joined Company H by a transfer made at Brattleboro, Vt., just before muster in. Wounded July 3rd, 1863 at the battle of Gettysburg and in the charge against General Pickett, and was mustered out July 21st, 1863. His first enlistment was in the 3rd Vt. Vols., Company K, from which he was discharged December 23rd, 1861. Re-enlisted again for the 3rd time, October 31st, 1863 and into 3rd Battery Light Artillery and died August 9th, 1864. This was an old man, but must have been extremely loyal and patriotic, and a good fighter for he volunteered three times and continued in the service from the beginning to the end finally dying in the service. His picture on page 338 reflects his determination, a typical Green Mountain volunteer.

James Monroe Lyford, also known as Monroe or Munroe, had a family tradition of serving their country during war. His father, Peter Lyford, served during the War of 1812. His paternal grandfather, Thomas Lyford was an officer during the Revolutionary War. Monroe Lyford was born February 22, 1835 in Woodbury, Vermont. He was the youngest of 10 children of Peter Lyford and Lois Blanchard.

At the age of 15, the 1850 census showed him as a farmer, living on his parent's farm in Woodbury. By 1860, he had moved to Cabot, and was living on the farm of Richard Kimball.

He followed the example of his oldest brother, Aura, by enlisting in a Vermont regiment. Monroe chose to enlist in the First Vermont Cavalry Regiment on September 12th, 1861 at the age of 26, and was mustered in on November 19th, as a private credited to Cabot. He joined two of his 1st cousins - once removed, (Jerome B. and Marshall E. Hatch) who were also members of the 1st Vermont Cavalry.

This is how the Gazetteer of Washington County, Vt. 1783-1889 described his service. "He entered in the service of his country in Co. C, 1st Vt. Cavalry, served three years, was in the battles of Cedar Mountain, Second Bull Run, Antietam, and Culpepper, where he received a severe wound in his left shoulder, September 13, 1863. He was in the hospital, off duty until the ensuing March, when he returned to his company and participated in the battle of the Wilderness. He was discharged November 19, 1864, at the expiration of his term of enlistment."

After the war, he returned to Vermont and married Lucretia Laird on November 18th, 1865. In 1870, he was a farmer, living in Woodbury, with Lucretia and a 1 year old daughter, Inez May. His farm was valued at $3,000. He served for a time as a Selectman in the town of Woodbury. The 1880 census shows him still a farmer in Woodbury, and with another daughter, Estella J., born in 1872. They had a third daughter, Bessie P. in August 1885.

James Munroe Lyford died in Hardwick, Vermont on April 21st, 1905, at the age of 70, due to secondary shock from having a broken leg amputated. He is buried in the West Hill Cemetery, in Cabot.

Aura Lyford was very dedicated to the Union cause. He was not a young man when he enlisted, and he enlisted three times. He also paid the ultimate sacrifice. He was born on May 15, 1815 in Cabot, Vermont. He was the third of ten children, and oldest son of Peter Lyford and Lois Blanchard. He married Asenath Hoyt (born April 4th, 1815) in Cabot in November 1837. Both his wife and his youngest child, Aura Jr., died on the same June day in 1855. Aura Jr., who was born the previous October, was only 9 months old. On their gravestone he had inscribed "Parent and Babe together lye, Til Jesus calls them to the skies." Aura was left with 3 children; Harriet (1849), Henry Blanchard (1844) and Betsy (1840).

Both the 1850 and 1860 census returns show that he was farmer and was living in Woodbury.

Aura had a very active service record, with three enlistments in three different Vermont units. He enlisted first on July 10th, 1861 and mustered in as a private in Company K of the Third Vermont Volunteer Infantry on the 16th. He was discharged with a disability on December 23rd of that year, but reenlisted again on September 8th, 1862 and was mustered in on October 10th as a private in Company H of the Thirteenth Vermont Volunteer Infantry. He was one of 81 members of his regiment wounded at Gettysburg on July 3rd helping to repel Pickett's Charge. He was again mustered out of service on July 21st of that year.

Once again he reenlisted, for his third and final time. This time it was with the Third Vermont Battery of Light Artillery, on October 31st of 1863, and he was mustered into that unit on January 1st, 1864.

Aura's service ended on August 9th, 1864 when he died of disease in Washington, D.C. He is buried in the Center Cemetery, in Woodbury.

Contributed by Peter Flood, a distant cousin of James and Aura.