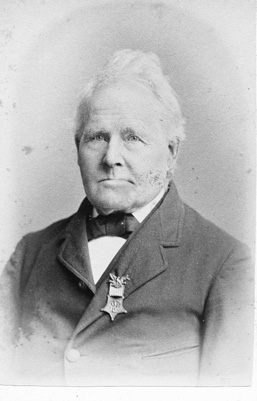 Passed Away Suddenly Last Night at the Age of 93

Oldest Veteran in the State

And perhaps in New England, Lost Two Sons in the War, but Survived Himself to Ripe and Active Old Age, Ill Only Five Days

Lewis P. Fuller, aged 93 years, three months and 12 days, the oldest Grand army man in the state and probably in New England, died last night at 10:30 o'clock at the home of his daughter, Mrs. J. W. Hargraves of Franklin street of acute indigestion and heart failure after an illness of only five days.

Mr. Fuller had been a remarkably active man for one of his age. Until within a few years ago he was a regular attendant at the meetings of C. D. Sanford post G.A.R. of which he was the oldest member. He enjoyed nothing more than those gatherings where reminiscences of the wartime were told and retold by the participants and his presence was always a source of pleasure to his comrades. He was twice elected chaplain of the post.

He retained all his faculties to a remarkable degree, even after a severe illness some five years ago he recovered all of his strength, apparently, and steadfastly refused to consider his age as a detriment to his activity. He was, until very recently, a more or less familiar figure on the streets, often riding to the business section of the city and greeting old friends.

The funeral will be held Monday afternoon, there being prayers at the house at 2 o'clock and service at the Baptist chapel at 2:30 o'clock, Rev. J. H. Spencer officiating. Burial will be in the Stamford, Vt., cemetery. The bearers will be members of C.D. Stanford post and the post will conduct the Grand Army burial service at the grave.

Lewis P. Fuller was born in Whitingham, Vt., June 24, 1812, of old Puritan ancestry. He received slight advantages of schooling, but was obliged to go to work on the farms almost as soon as he could handle the tools of agriculture. When he was 18 years old he was able to attend a school at Halifax, and later went to Arms Academy at Shelburne Falls for three terms. He then taught school in Colrain for five winters working during the summer months. He was married in Whitingham at the age of 25, and three years later, with his wife, moved to Stamford, where he lived until the civil war broke out.

At the breaking out of the rebellion Mr. Fuller had two sons, Hiland and James. Hiland enlisted in the 2nd Vermont Volunteers, and after serving three years was killed at the battle of Cold Harbor. James served in the ambulance corps at Washington, and died within a year of his enlistment as a result of illness caused by the arduous duties of this position.

In 1862, Mr. Fuller, then just 50 years of age, enlisted and followed his sons to the front. He received a commission as second lieutenant in Company K, 14th Vermont volunteers, and left with his regiment for Washington that fall. The regiment formed part of the 2nd Vermont brigade in the reserve army, detailed for duty for the defense of Washington. He did guard and picket duty at Alexandria, Fairfax and Wolf Run Shoals, and in 1863 resigned his commission and returned to his home, having lost two sons in the service. He returned to Stamford, where he lived for some time, moving then to the town of Clarksburg, where he lived three years, and then coming to this city with his family.

Mr. Fuller was older than most of his comrades in the service, and since the war had seen the few of his men age pass away until he remained the oldest member of the Grand Army in this state and perhaps in New England. He attended the national encampment at Washington in 1896 and at that time was the oldest veteran in line in the Grand parade. The following year he went to the encampment at Buffalo, where he was again the oldest present. At that time he went on to Chicago to visit a daughter, and the photograph from which a reproduction is given here was taken at that time. Since returning, Mr. Fuller had lived quietly at the home of his daughter, Mrs. J. H. Hargraves on Franklin Street.

The two sons who gave their lives to their country during the war were the only two, but Mr. Fuller had four daughters living, Mrs. Prescott Millard of Chicago, Mrs. A. A. Lee of this city, Mrs. A. A. Babbitt of Monson and Mrs. J. W. Hargraves.

Comrade Lewis P. Fuller Who was born the 24th day of June A.D. 1812 in Whitingham County of State of Vermont. Enlised at Stanford VT and commissioned 2nd Lieut of Co K 14th Regt Vt Infantry September 18, 1862. Resigned and mustered out March 9th 1863. His most intimate comrade in the service was Capt. Alonzo H. Colvin. He died Oct 5 1905 aged 93 years at the time of his death he was the oldest G.A.R. man in the state of Massachusetts.