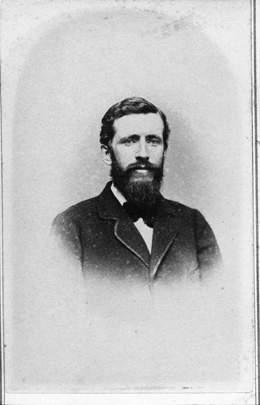 CAPT. FREDERICK F. GLEASON
To the Editor of the Free Press:

The last number of the Brattleboro Phoenix announces the death at that place of Capt. Frederick Fletcher Gleason, captain of Co. K, in the 5th regiment during the Civil War. Captain Gleason was born in Richmond, and was the son of the late Col. Rolla Gleason, whose intense patriotism during the war will be well remembered by all our elder citizens. Captain Gleason had an enviable war record and the Phoenix gives him unstinted praise for his record in civil life.
J. L. BARSTOW

Capt. Frederick Fletcher Gleason, 73, a well-known farmer, a captain in the Civil War and for a period of seven years one of the selectmen of Brattleboro, died in his home on Greenleaf street, a mile southwest of West Brattleboro village, about nine o’clock Monday night. He had been in ill health several years, particularly so the past year, and for four months he had been confined to the house most of the time. For three or four weeks before his death there had been little expectation that he would recover. Death was caused by a general breaking down.

Captain Gleason was born in Richmond, this State, March 29, 1845, and was one of seven children of Col. Rolla Gleason and Janett (Mason) Gleason. He was of Revolutionary descent, on his mother’s side. He attended Underhill and Barre academies, working on the home farm until ill health made it advisable for him to take a long rest, which he did during the last few years before coming to Brattleboro.

In July, 1861, he enlisted in the army and on September 16 was mustered into the service as captain of Company K, 5th regiment, Vermont volunteers, joining the Army of the Potomac, Vermont brigade, two two days later. He participated in the battle of Lee's Mills, Williamsburg, Golden’s Farm, Savage Station and White Oak Swamp, all of which were in the seven days’ retreat in front of Richmond, Va. He was in the Maryland Campaign, when General Lee sought to take Washington, and in the battles of Crampton’s Gap and Antietam, and was discharged for disability in 1863. He was a charter member of B. M. Barber Post, G. A. R., of Richmond and served as commander of the post six years, transferring his membership to Sedgwick Post of this town in 1890. Commander-in-Chief James Tanner honored him with an appointment as aide-de-camp on his staff.

Twenty-one years sago Captain Gleason bought the Robert Goodenough farm in West Brattleboro of E. H. Akley and moved there from Richmond, and his home had been there ever since. He united with the Methodist Church 30 years or more ago, and nearly all of the time since coming to this town he had served on the board of stewards of the Methodist church of this village. He was school director and held several town offices in Richmond, and served on the Brattleboro board of selectmen with William H. Vinton and the late Dr. Dan P. Webster, holding the office seven years. For many years he was secretary of North Star Lodge, F. & A. M., of Richmond and retained his membership in that lodge.

On Jan. 1, 1867, Mr. Gleason married Miss Mary A. Sheldon of Lowville, N. Y They had one daughter, Erma P., and she and her husband, J. E. Higley, have lived with Mr. and Ms. Gleason. Besides his wife and daughter, Mr. Gleason leaves two sisters, Josephine, wife of Jerry Cummings of St. Albans, and Miss Eva Gleason of Burlington, and two brothers, H. C. Gleason of Burlington and Rolla Gleason Jr., of Boston.

Mr. Gleason was a strictly honorable and upright man, conscientious in all his dealings, and in his positions of public trust he exercised sound judgment and applied himself to his duties with unswerving fidelity. He was a staunch supporter of the Methodist Church, where his counsel was valued highly, and his home life was marked by kindness and devotion.