NELSON GOODSPEED was born in Montgomery, Vt., September 21, 1839. His father was an intelligent and successful farmer and a prominent citizen of the town. His son, Nelson, had the advantages of the common schools of Montgomery and Fairfax Institute in the town of Fairfax, Vt. Young Goodspeed stood well in his town and was deservedly popular among all classes especially the young men and boys, and to him the volunteers from Montgomery turned and agreed to urge his name tor a lieutenancy at the coming organization of the Bakersfield company, and on the 11th of September was chosen second lieutenant with the enthusiastic co-operation of the boys from Berkshire, Enosburg, Bakersfield and Richford, and all expressed themselves as highly pleased with his general appearance and looks and soldierly bearing. His courteous conduct and desire to become acquainted with each member of the company at once won for him the respect and affectionate regard of the whole company. Though second lieutenant he was at least the equal of Captain Marvin White, and First Lieutenant Merritt B. Williams for the responsible duties of an officer. His strict attention and anxiety to acquire knowledge of the rules and regulations appertaining to the official relation to which he had been selected to fill, gave promise of efficiency, adaptation and usefulness as a soldier, an officer and one who would courageously do his full duty in the crisis of battle. All were impressed with his eagerness to have Company G fitted for the new life they were then entering upon.

The 13th Regiment was made ready in haste, mustered in on the 10th of October and on the way to Washington the next day. The untiring attention of the officers of the line and exposure in Camp Lincoln resulted in considerable sickness and quite a number were not able to leave with the regiment for the seat of war. Lieutenant Goodspeed after arriving at Camp Lincoln took a severe cold and on the morning of the day we started for Washington, October 11, was taken to the hospital critically ill with pneumonia, where he lay for weeks dangerously sick, and his recovery was reported doubtful. His youth and vigorous constitution, and the best of care brought him through, but leaving his lungs so bad that the physicians said the only chance of recovery from incipient consumption was the vigorous climate and careful nursing at his mountain home in Montgomery. The disappointment was bitter and hard (for a young, zealous patriotic young man of 22 who had freely volunteered, made all necessary arrangements and with unusual devotion, anxious to serve his country in its contest for existence) to bear. He hoped to recover and take his place in his company and therefore declined to resign his commission for months, hoping he might recover and join his company and regiment, now on the picket line near Bull Run battlefield. His sickness was long and for weeks was unconscious; his family and friends overwhelmed •with grief and apprehensive of death. He returned home as soon as able to be moved and when fully satisfied he would not be restored to health so as to take part in the pending campaign on February 6, 1863, tendered his resignation with sincere regrets that his place in Company G might be filled without further delay. The position was held open hoping and expecting that Lieutenant Goodspeed would recover and join his company and regiment, but all were disappointed and sad to learn of his protracted illness and doubtful recovery, and the news of his resignation, was occasion of sincere regret by such as had become acquainted with him, especially his company comrades.

Lieutenant Goodspeed's soldierly appearance in company drill and on dress parade at Camp Lincoln, uniformed and fully equipped, stalwart and erect, six feet in height, gave evidence of a model soldier and assurance of valiant performance of duty in the contest for victory. He fully comprehended, not only the urgent necessity for volunteers at the date of his enlistment, but the probabilities of death by disease and in battle, and yet with buoyant hope and an exultant heart left his home, dear friends and all, to serve his country for the preservation and life of the Union.

Lieutenant Goodspeed recovered after a long convalescence and resumed his place in the business affairs of his native town, but has ever felt mortified because deprived of the opportunity of serving his country for the preservation of the Union. Only a few years ago in conversation with Comrade Goodspeed he said that his deprivation of service was a bitter disappointment and a lifelong regret. Our respected friend and comrade declared his manly courage when he volunteered and his extreme sorrow when obliged to resign. Sickness only prevented him from continuance in the service. Every act of his life since the Civil War has justified the high regard of his comrades that he would have made good on the battlefield, their full expectation when he was mustered in at Camp Lincoln, October 10, 1862. For many years he has made his home in St. Albans, where he has led the active life of an up-to-date, successful farmer. Modest and retiring in disposition, conservative in thought and action, attentive to business, a man of good character, a valuable citizen, commanding the respect and esteem of neighbors and acquaintances, ever ready and willing to do his part in promoting every laudable enterprise for the elevation and prosperity of the community in which he resides. May he live long and die regretted. 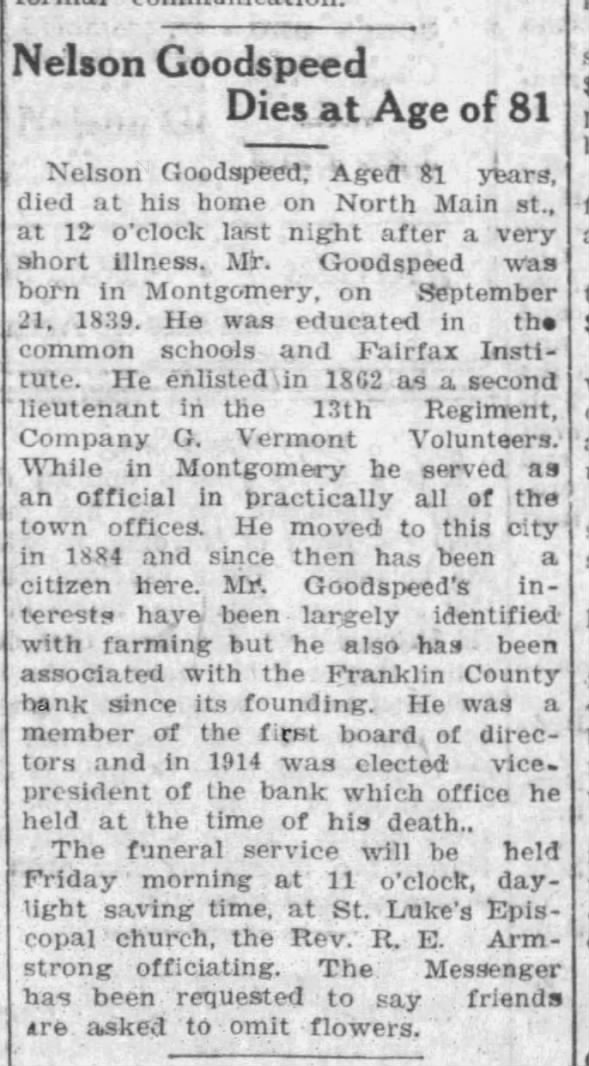