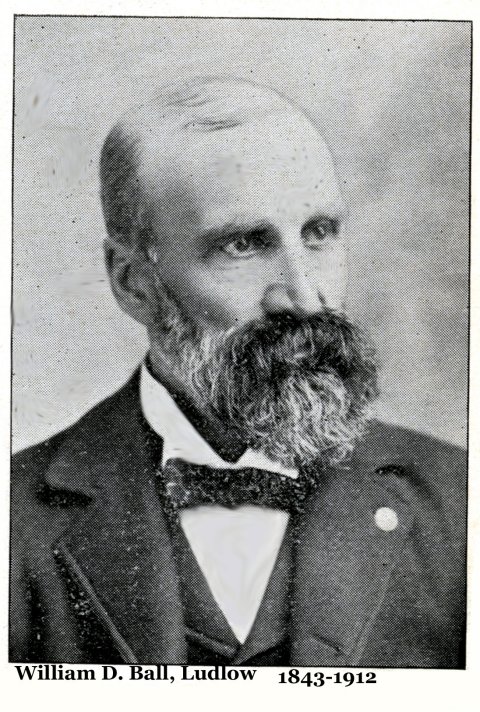 His father was a tanner and currier by trade and located in Bellows Falls, Vermont in 1848. Mr. Ball Sr. subsequent carried on business in Londonderry, Vt. where the son followed the same 'trade' On 25 Aug. 1862, Mr. William Ball enlisted and in October, 1862 he mustered in Company "C", 16th Reg't, Vt. Vols in Civil War, under Col. Wheelock G. Veasey. He was a corporal and served at the Battle of Gettysburg by Veazey's side. He was mustered out with his regiment in Aug., 1863, and reenlisted in March, 1865 for three years. However, he was discharged in May following, at the close of the war. After a business college course in Rutland City, Mr. Ball was employed for five years in the hardware store of Robbins & Marsh in Chester, Vt. He came to Ludlow to live in 1871, previously working in Bellows Falls. He established a hardware business in Ludlow which he operated until 1883, when he retired and had dealt in carriages, wagons, and sleighs to some degree. He was a director of Chester Savings Bank and held other important offices in the community, Captain Ball was the past commander of Howard Post G.A.R., aide-de-camp on staff of National Department and was commander-in-chief in 1910 and 1911. He was a delegate to the national G.A.R. encampment at Salt Lake City, Atlantic City & Rochester, NY. In 1911 he was senior vice commander of the Dept. of Vt. The G.A.R. was his passion and he served it well. He also served as past master of Black River Lodge F and A.M. and a member of Okemo chapter, R. A. M.

He was twice married. his first wife was Agnes White Ball, and she died many years ago. His 2nd wife was Eva Dorval. He died after an eight months' illness with heart disease and kidney failure at his home on Andover Street in Ludlow, Saturday morning, 26 Oct., 1912 (age 69). From his obituary: "A citizen who had for many years been identified with the town's business circles and interested in everything that made for its welfare - a man of genial temperament, who had many friends and acquaintances and who will be greatly missed." His widow Eva survived him, and their son, Allen D. Ball of Ludlow. Captain Ball, as he was known, was Universalist by faith, and a deacon many years. Rev. F. L. Payson preached his funeral sermon and G.A.R. gave their ritual at the grave. A very large number were in attendance. [*note: Captain Ball's picture was in the 21 Oct. 1912 issue of the Vermont Tribune newspaper].

[Note: in Aug., 1920, his son Allen D. Ball, a graduate of Black River Academy, was the local agent for the American Railway Express Co. (for 15 years), and for the past five years conducted a general insurance business. He took out nomination papers for Ludlow's representative to the legislature at that time.]

DEATH OF WILLIAM D. BALL
Was For Many Years a Prominent Business Man in Ludlow

Ludlow, Oct. 27. - William D. Ball, one of the best known citizens of this town, died here Saturday morning after an illness of several months with heart and kidney disease.

Mr. Ball was born in Dorchester, Mass., in 1843, being the oldest son of Henry W. And Mary Dunham Ball. His father, a tanner and currier by trade, located in Bellows Falls in 1848 and subsequently carried on his business in Londonderry where the son followed his father's trade until October, 1862.

At that time he enlisted in company C, 16th Vermont regiment under Col. W. G. Veazey. He was mustered out with his regiment in August, 1863, but re-enlisted in March, 1865, for three years, but was discharged in May following at the close of the war.

Mr. Ball then studied at Langley's Commercial college in Rutland and then entered the employ of Robbins & Marsh, hardware merchants at Chester, remaining there five years.

Mr. Ball then engaged in business in Bellows Falls, but in 1871 came here to live. He conducted a successful hardware business here and built a block. He retired from active business in 1893, but was engaged in the sale of wagons until recently.

Mr. Ball was a member of O. O. Howard post, G.A.R., and past senior vice commander of the state G.A.R., and was also a Mason. He was twice married, his first wife, Miss Agnes White, having died many years ago. His second wife, who was Miss Eva Dorval, survives him, as does their son, Allen D. Ball, of this place.

Funeral services will be held at his late home on Andover street Tuesday afternoon at 2 o'clock, and Rev. F. L. Payson of the Universalist church will officiate. The G.A.R. Ritual will be used and Black River lodge, F. And A. M., will act as escort. Burial will be in this town.