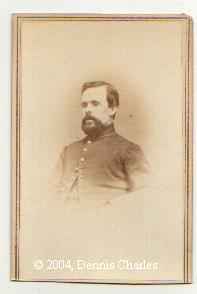 MIDDLEBURY
Burial of B. F. Owens - Notes on the life of a gallant Soldier.

Mr. Benjamin F. Owens, whose funeral occurred here on Saturday, was a member of Company C, 9th regiment, Vermont volunteers. He was born in Wales and came to the United States in 1848, making his home in Middlebury. In June, 1862, he enlisted under capt. Albert R. Sabin, serving in the ranks until the war ended and was mustered out of the United States service in Burlington June, 1865. Upon his return home he engaged in milling and mercantile business until his health gave out. The effects of army life made him subject to severe attacks of chills and fever, which, with other ailments, resulted in his being a confirmed invalid and the latter part of his life was spent in taking the best possible care of himself. Mr. Owens; last sickness was winter cholera, and, after some three weeks' illness, he died in early morning of February 9. The funeral services took place at his home, Rev. Thomas Bail, rector of St. Stephens' Episcopal church officiating, and was attended by a large number of friends, members of his company and regiment, and by William P. Russell post, G. A. R. The casket was draped wit the United States flag and decorated with beautiful flowers sent by the Grand Army post. The singing was by a quartette from the church of which he had been a consistent member for many years; the interment was at the West cemetery. Comrade Owens was a private for three years, and was in every sense a soldier who carried a ‘thinking bayonet.' He was one of his regiments best soldiers, always ready for duty, many times serving in the ranks when he should have been excused. As a man he was respected by all who knew him. He is now at rest, but he leaves n unblemished life as a soldier and citizen, as an example to his comrades and townsmen.