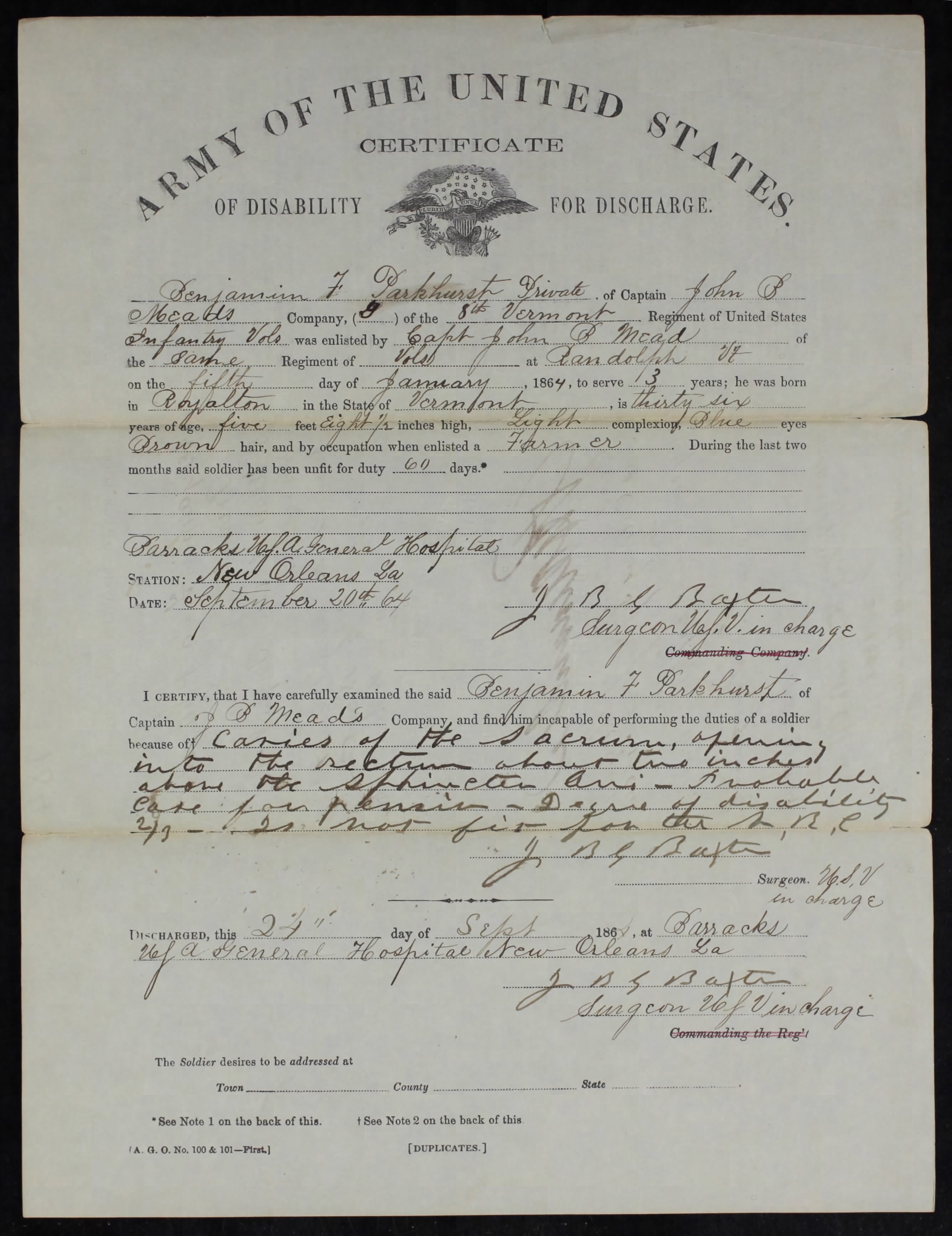 Benjamin Franklin Parkhurst, a native of Royalton, Vt., died Aug. 18, in Baltimore, Md., aged 87 years. His funeral was held in Worcester, Mass., and according to his desire the beautiful Knights Templar service was celebrated for him by members of the Worcester County commandery. He was buried in East Randolph, Vt.

Mr. Parkhurst was born in Royalton in 1829. He was the son of Colt and Mary Ann (Bingham) Parkhurst. His grandfather, Benjamin Parkhurst, was one of the first settler s of Royalton and took an active part in the early development of the town. His great-grandfather, Thomas Bingham, who came to Royalton in 1785, was a lieutenant under Lafayette, serving at Brandywine, Princeton and Monmouth; his grandfather, William, son of Thomas, was captain of militia in the war of 1812.

Mr. Parkhurst had the family qualities of attachment to the soil, cordial hospitality, singular love of his native state, interest in public matters and willingness to fight in a good cause. He served in Co. G, 8th Vermont Regiment of Volunteers, from 1861 to 1865.

He was a lifelong believer in the principles of the Democratic party.

On the day he was 21 he became a member of the Rising Sun lodge, A. D. and A. M., and he always cherished and revered the traditions of the order. At the time of his death he was a 32 degree Mason; a life member of the Massachusetts consistory, the Worcester County commandery K. of T., Lawrence chapter Rose Cross, the Worcester Lodge of Perfection, Montneate lodge, A. F. and A. M., and Goddard Council Princes of Jerusalem.

His early life was spent on the old Parkhurst farm in North Royalton, whence, even as a boy, he sometimes drove his father's loaded wagon over the turnpike to Boston markets. He saw the Central Vermont railroad laid through the farm and worked on its construction. He was at one time interested in the development of the old Morgan horses and owned a well-known sire.

Mr. Parkhurst lived in Worcester, Mass., from 1871 to 1901. For seventeen years he as superintendent of the city poor farm and scavenger department and set a standard of thorough and efficient administration in both departments. During the last sixteen years he has made his home in Tangerine, Fla., because he was not able to endure the changes of the northern climate.

In 1852 Mr. Parkhurst married Frances Graves of East Randolph, Vt. She died in Worcester Mass., in 1893. Eight years later he was married Harriet E. Maynard of Worcester, Mass., who survives him. He had one daughter, Helen, by his first marriage, who also survives him. She is the widow of Sylvester D. Judd of Washington, D. C.