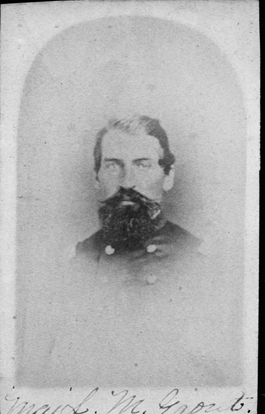 Major Luman M. Grout, son of Don Grout, was born at Elmore, Vermont, March 8, 1823, died at Waterbury, Vermont, December 9, 1913. He was educated in the district schools of his native town, and for a time followed farming there. In 1847 he enlisted in Company D, a Vermont company, of the Ninth Regiment United States Infantry, for service in the Mexican war. He was appointed corporal at Fort Adams and held that rank until he was mustered out of service. He took part in the battles of Contreras and Cheresbusco, where he was severely wounded in the head, and carried from the field to a hospital. He recovered, after several weeks, and was detailed to accompany the first train to Vera Cruz. After his return from this service he suffered from chronic rheumatism and he was honorably discharged, March 29, 1848. He returned to his farm at Elmore. In 1857-58 he represented the town of Elmore in the state legislature. When the civil war broke out he was placed in charge of recruiting, but he soon decided to go to the front. He had been drilling a body of volunteers, which became Company A of the Eighth Vermont Volunteer Infantry, and these men declined to enlist unless he would accept the command of the company. He was accordingly elected and commissioned captain. He took part in the taking of New Orleans. He was promoted to the rank of major to succeed Charles Dillingham, December 24, 1862, but in June following he was obliged to resign on account of illness. He continued to live at Elmore upon his return from the war, but afterward located at Montpelier, where he made his home near the junction for many years. For some time he resided in Stoneham, Massachusetts, where his second wife died. He then returned to Waterbury, Vermont where he spent his last years in the home of his son. Major Grout was the last survivor of the Mexican war who went from Vermont and who also served in the civil war. He married (first) Philura French, daughter of Nehemiah and Esther (Green) French. Children: Don DeForest, [born April 24, 1849]; Sara Josephine, born August 29, 1850; Frank Eugene, December 4, 1851; Caroline Wheaton, May 16, 1854; George Gleason, February 13, 1856; Emma, April, 1859; a son was born in 1862, Luman M., who died at age of nine months, whom his father never saw.

Major Luman M. Grout, a veteran of the Civil War and the last surviving Vermonter who fought in the Mexican War, died at 1 o'clock Tuesday afternoon, Dec. 9, at the home of his son, Dr. Don D. Grout, superintendent of the State Hospital for the Insane at Waterbury. Death was due to the general weakness natural to his advanced age of 90 years.

Major Grout was born in Elmore march 8, 1823, and in 1846 offered his services when the Mexican War broke out. He fought under Captain Kimball during the campaign which ended in a victorious march from Vera Cruz to Mexico City. At the battle of Cherubusco he received a bullet in the head and was left for dead upon the field. He was spared, however, to serve his country again in the great rebellion.

When peace was made with Mexico, he retired to Elmore with the rank of corporal, married and pursued the even tenor of civil life until President Lincoln's call for volunteers was heard. Then he recruited and drilled the companies of the Fifth Vermont Infantry and the First Vermont Cavalry, but did not go to the front until April 5, 1862, when he was dispatched to Ship Island in the Gulf of Mexico at the head of Company A of the Eighth Vermont. He served with conspicuous valor at Winchester and Fisher's Hill.

He was promoted captain and then major to succeed Senator Dillingham's brother, Charles, who was advanced to the rank of lieutenant-colonel. In June 1863 he was mustered out on account of illness and came back to Vermont to live several years in Elmore and Montpelier.

He afterwards removed to Stoneham, Mass., and became one of its prominent citizens. He was twice married and upon the death of his second wife in Stoneham he left that city to live with his son in Waterbury. Besides Dr. Grout, he left two sons, George of Morrisville and Frank of Montpelier, and two daughters, Mrs. Harvey Collier of Stoneham and Mrs. Marcellus A. Bingham of Burlington. He had 15 grandchildren and five great-grandchildren.

The burial was in Morrisville last Saturday, the remains being placed beside his first wife in Riverside Cemetery.