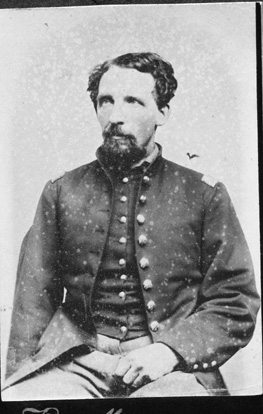 In 1847, he purchased a farm in Warren, Vt , where he established his parents. He taught school in Campbellsburg, Ky., September, 1847, until 1848, when he returned to his home in Warren.

On May 1, 1849, he sailed for California, via Cape Horn, arriving in San Francisco, October 11 of the same year. He served as a bookkeeper in a hotel from October, 1849, until February 1850. when he went to Mormon Guleh and began mining for gold, but in a short time was taken sick and returned to San Francisco. On June 14, 1850, he came near being a victim of the great fire which swept over that city. Soon after this fire, he went to Milwaukee, Oregon and assisted in the construction of the steamer, Lot Whitcomb, on which he served for a short time as purser, and later, as pilot until 1854, being the first commissioned pilot on the Columbia and Willamette rivers; was captain of the Fashion and Iris until 1861, when he returned to Warren, Vt.

He soon offered his services to the State and raised a company for the service, which became Company G,6th Vermont infantry; was commissioned its captain, October 9, 1861; served with distinction at the battle of Warwick Creek; was taken sick with a fever and was forced to resign, April 18, 1862. He returned to Oregon in 1863 and was captain of various steamers running on the Columbia River unti 1866, when he located in the oil region of Pennsylvania to assist his brother in the prosecution of a S300,000 law suit in which they were successful. He then managed two oil farms in the Pit Hale section; leased and sold land and operated various oil wells. In 1873, his health failing, he located in Chelsea, where he made his home until his death.

He was vice-president of the First National Bank of Orange County, Chelsea, 1874-1907. He was a Democrat in politics; was selectman and overseer of the poor in Chelsea for several years. He was a charter member of Waterson Post, G.A.R., and its commander for nine years; member of George T. Hebard Command, No. 1, United Veterans Association; New England Associated California Pioneers of 1849.

Death of an Old Oregonian. - Very few persons remain who remember the steamer Lot Whitcomb, built at Milwaukee in 1850. A reminiscence of the steamer, and of men of the time, is furnished by the death in Vermont of Captain W. H. H. Hall, who was her first Captain, and the first commissioned pilot on the Columbia and Willamette Rivers. Captain Hall died June 27 in Chelsea, Vt., in his 88th year. He came to Portland in August 1850, in the bark Louisiana, from San Francisco, to take charge of the Lot Whitcomb. On the same vessel was Joseph Kamm, who came to take the post of engineer of the new steamer. The machinery came up on the Louisiana, on the same trip. Mr. Kamm put it in, and the steamer started to run in the fall of the same year. She proved too large a boat for trade at that time and later was taken to California. On the Louisiana, besides Captain Hall and engineer Kamm, came John Arvis Waterman and W. D. Carter, who established the Oregon Weekly Times at Milwaukee, which later was removed to Portland, where it was published till 1863, when it suspended. All those save Mr. Kamm are now dead. Captain Hall came out to California in 1849. After leaving Oregon, about 1854, he returned to his native state, and in 1861 entered the volunteer army for service in the civil war. He raised Company G, Sixth Vermont Regiment, and led it as its captain, till disabled in the service, when he retired. He was prominent in the local affairs of his town till his death.